With homes, galleries and studios entirely destroyed, Lebanese artists respond in the aftermath of Tuesday’s carnage 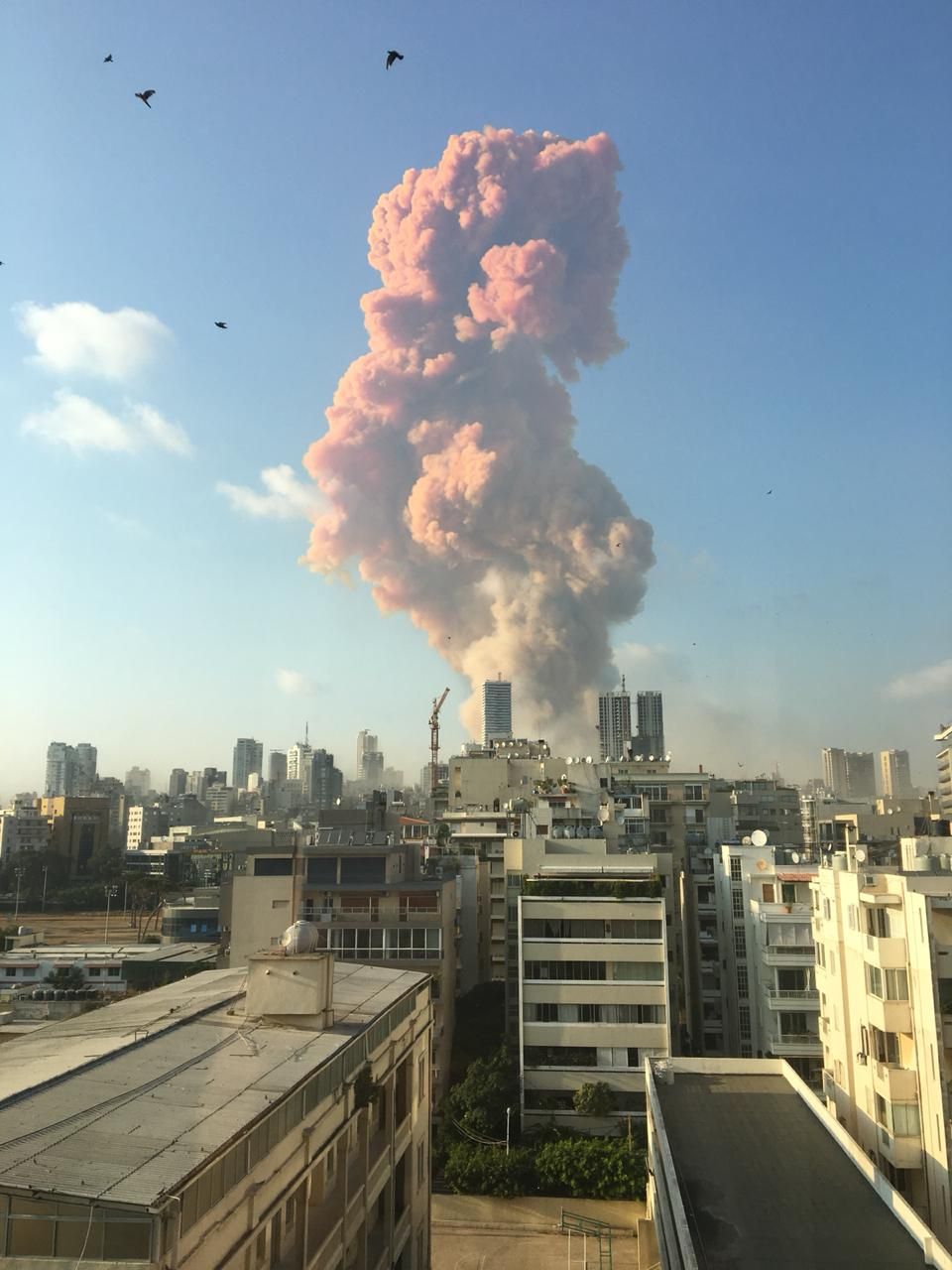 A young aspiring gallerist and an architect who helped rebuild his home city after the civil war are among the now 137 confirmed dead following the explosions in Beirut on Tuesday evening. Gaia Fodoulian, 29, who was killed in the explosions, was working to become an art dealer. She was the daughter of Annie Fodoulian, the co-founder of Letitia Gallery, which closed in February after months of economic hardship. The Lebanese architect Jean-Marc Bonfils, 57, who designed Beirut's Gallerie Tanit, also died in the blast.

Gaia Fodoulian July 8, 1991-Aug 4, 2020. Beautiful daughter, aspiring gallerist, loving friend and shining light whose memory will never leave us. Thank you Gaia for the memories while I was in Beirut, for superbly organising our talk at the Sursock Museum, and for our last, fun dinner together. In our hearts forever ❤️ Heartfelt condolences to Annie Fodoulian, @letitiabeirut and all the family

More than 5,000 are now confirmed injured and 250,000 displaced while buildings—including many museums and galleries—have been left in a rubble of debris, glass and smoke. The eruptions took place after a store of 2,750 tons of explosive ammonium nitrate stored at the city's port caught light.

In the aftermath of the powerful blasts, the Lebanese people—many now homeless—banded together and took to the streets, carrying brooms and cleaning supplies to begin the slow process of reinstating their homes and their lives. The artists who spoke to The Art Newspaper said they were in the midst of cleaning their homes and studios and that frequents cuts in electricity and the Internet made communication a constant challenge. Many were too upset to speak.

The artist Abed Al Kadiri inaugurated his exhibition Remains of the Last Rose at Gallerie Tanit on Monday. The gallery, run by Naila Kettaneh Kunigk—who opened her first space in Munich in 1972 and the Beirut branch in 2007—has been entirely decimated. Yesterday, Al Kadiri went to the site and was able to recover three paintings out of the 13 he created. The rest remain under rubble but he hopes to save them. An installation view of Abed Al Kadiri's exhibition Remains of the Last Rose, just before it opened at Beirut's Galleie Tanit on Monday Courtesy of the artist 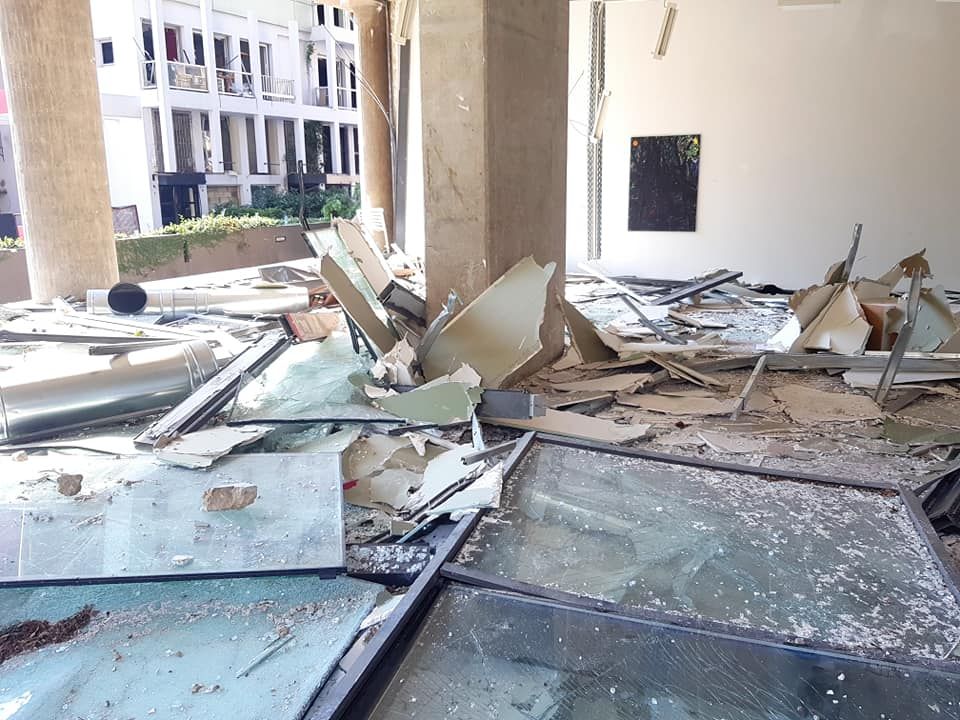 Gallerie Tanit, along with most of Abed Al Kadiri's works, were destroyed in the explosion Courtesy of the artist

Al Kadiri’s abstract canvases that were on show are painted pitch black save for a few flecks of colour outlining the faint bodies of human figures. “Like the artworks, everything has become almost black in Lebanon and that’s why Naila [the gallery owner] asked me to show these paintings because she felt they represented the dark phase that Lebanon was experiencing,” he says. “Many people came to the opening and I was so happy that we brought people together for an art exhibition in the midst of such a difficult time. Naila told me: ‘There might not be another art season so let’s do this now.’” He adds: "All I hope now is for the quick recovery of those who have been injured and a safe return to the now-scattered people, especially the gallery team including Charles Khalil who was injured while working in the gallery."

The visual artist and photographer Tarek Moukaddem was at his home and studio in Gemmayze when the explosions went off. One of the areas hardest hit, it is known for its vibrant night life, bars, restaurants, art galleries and trendy boutiques. “I lost my home and my art studio,” he says. “Now I am just trying to pick up the pieces from whatever is still intact and move somewhere else. I lost most of my [photography] equipment and my assistant is severely injured and is in hospital.” He adds: “I want to work again soon but I don’t know how. We all have so much anger now that we want to get out and to express and I think art is the best way to do this.” 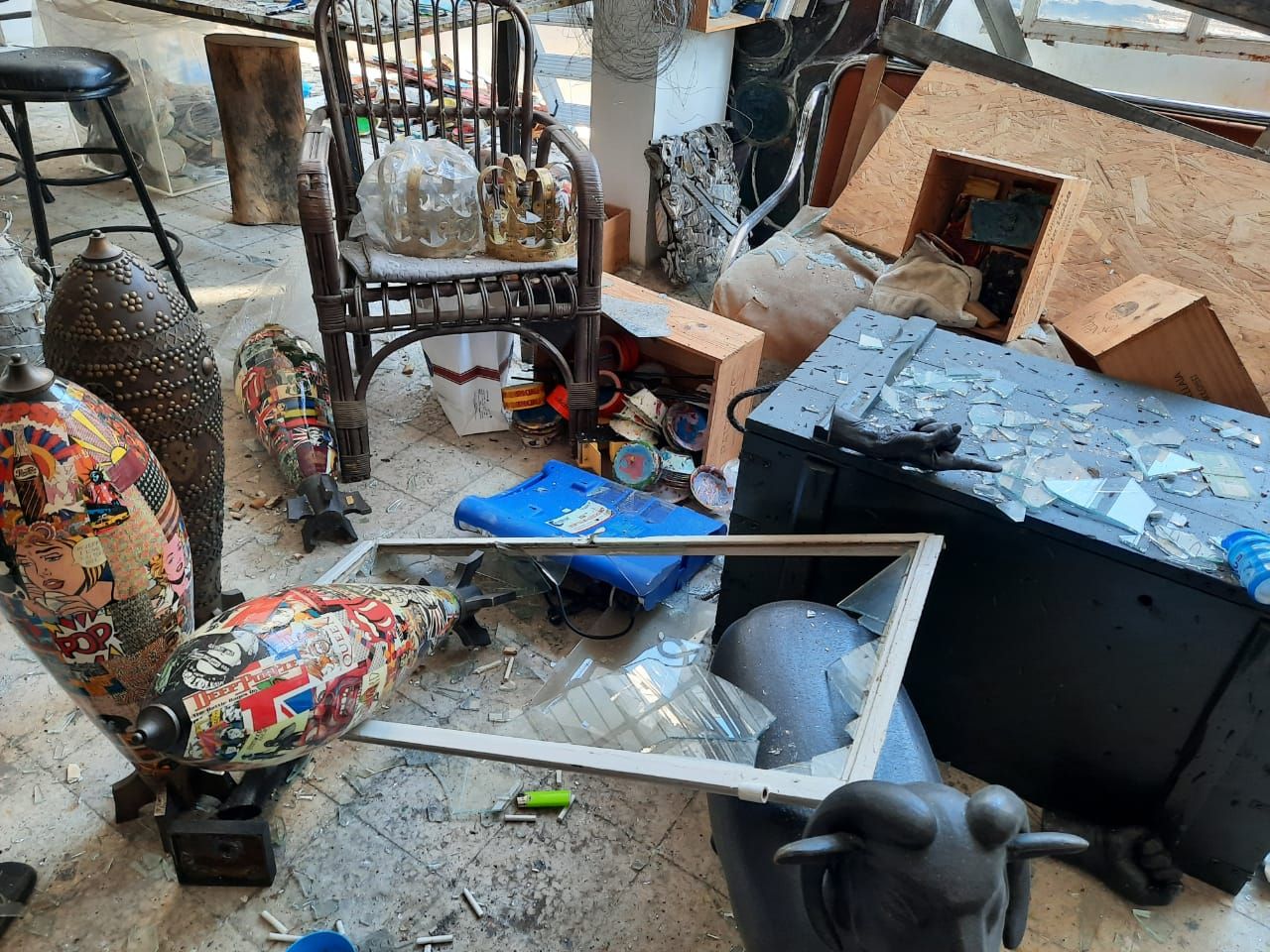 Katya Traboulsi’s studio after the explosion Courtesy of the artist

The artist Katya Traboulsi had left her studio half an hour before the explosion. “If I had stayed in my studio I would have been wounded by glass,” she says. Although none of her artwork was damaged her studio has been. “I have lived through the civil war and we are all damaged emotionally,” added Traboulsi. “When something like that happens, you can’t control yourself. You go into an old panic and an old fear and all the wounds from war reopen again. You feel so disoriented and desperate to hide somewhere but you don’t know where to hide. You wonder ‘why, why’ and your mind can’t process it.” “It is difficult to speak about the situation,” says artist Marwan Chamaa whose studio was affected. “My paintings are usually about love, happiness, women and peace. Speaking about what happened 48 hours after the total catastrophe makes me want to paint a therapeutic piece that may help me come to terms to what happened. The wounds are deep, and we need time to heal.”

Marwan Sahmarani, known for his explosive abstract expressionist canvases laden with vibrant colourings, was luckily not at home when the explosions hit. “My family’s home faces the explosion, and nothing remains,” he said. “My studio is badly damaged and it’s in an old house so it may fall apart. I need to bring the leftover paintings out quickly.” The destruction in Marwan Sahmarani's studio Courtesy of the artist

It still remains unclear what exactly caused the explosions. Lebanon’s prime minister, Hassan Diab, said an investigation would focus on the vast store of explosive materials held at a warehouse in Beirut’s port for the past six years.

Meanwhile protests erupted in Beirut's streets last night as angry residents accused the government of negligence, chanting “the people demand the fall of the regime”. There is also now concern over the food supply for the nation's 6.8 million people as the destroyed port was a crucial economic hub.

Yet a glimmer of hope was felt with the arrival of France's president Emmanuel Macron, who visited the port that no Lebanese politician has yet dared to enter. He is the first foreign leader to visit bringing along French planeloads of aid and rescue workers.

“Every time we heal, they open our wounds again,” says Traboulsi. "I am lucky to be an artist because it has helped me to heal from the war. I lived in Lebanon but now I don’t know what to think. I need to process all of this—my fear, my anxiety, my pain and my anger. Beirut is bleeding from everywhere.”