On 11 January, Leila Alaoui posted “Off to Burkina Faso” on Facebook and got 497 Likes. On the 18th, she died of wounds inflicted three days earlier by the jihadist group Al Mourabitoun while she sat in the café Cappuccino in the capital Ouagadougou. Thirty others died in the massacre.

The Franco-Moroccan photographer was there on a project about child marriage as part of Amnesty International’s “My Body: My Rights” programme. “She had already sent back some very good pictures,” said Samira Daoud, regional director of Amnesty for west and central Africa. “She had begun a series about young girls and managed not to turn them into victims but show them respect; she was perfect for the job, at ease in the context but keeping her distance.”

Alaoui was 33 years old and her career had just begun to take off. Born in Paris in 1982, brought up in Marrakech in an elegant French Art Deco house where her mother entertained the likes of Yves Saint Laurent, Bianca Jagger and John Paul Getty, she went to New York aged 17 to study sociology and photography at City University. In a later interview, she said that the eight years she spent abroad shaped her world vision and when she came back to Morocco, it was with a critical eye, but also the certainty that these were her roots.

Her inspiration was her mother’s passion for photography, but rather than photograph socialites, she defended the underdog, often living uncomfortably in the process. The big theme of her work was immigration—the hopelessness and the dreams that drive people to risk everything for a new and better life. She was just beginning to document the alienation and anger of third- and fourth-generation immigrants to France when she died.

In her series No Pasara (he shall not pass), a work commissioned by the EU (strange irony there) in 2008, she went to the remote and deprived towns of Morocco from which the young men come who try to enter Europe via Spain. One of her photos is of the words  “Open the door or I will explode” painted on a wall in the no-hope rural town of El Ksiba in central Morocco. Her work was on the edge of the unease that has generated the suicide bombers, the recruits to Isil, the very people who were to kill her.

Another project was about the even more deprived sub-Saharan African immigrants in Morocco who hope to get from there to Europe, the promised land. Her three-screen, immersive video shows the deserts they have crossed, the people themselves, and the cruel sea they long to cross.

She denounced the easy racism of the Moroccans, the front cover of the journal Maroc Hebdo with the face of an African under the headline “The black peril”. She collaborated with the French festival Migrant’scène whose 2012 edition in Rabat focused on the precariousness of those African immigrants’ lives in Morocco.

Perhaps inevitably, her most popular series has been the one that portrays interestingly dressed characters from the length and breadth of rural Morocco. She was inspired by Robert Frank’s 1958 The Americans as an idea, but the style, with the full length figures in a neutral, dark space, comes from Richard Avedon. They stand there in their picturesque garb, calm but unsmiling (Alaoui said that this was the spontaneous look of people who were not used to the camera). She would take their pictures quickly, inviting the subjects into her mobile studio straight off the street, usually near markets. Anxious to deflect any accusations of orientalism, she emphasised that these were their ordinary clothes, “I never posed them—I just asked them to stand as they liked. I wanted to record the cultural and ethnic diversity of Morocco away from the tourist traps”. 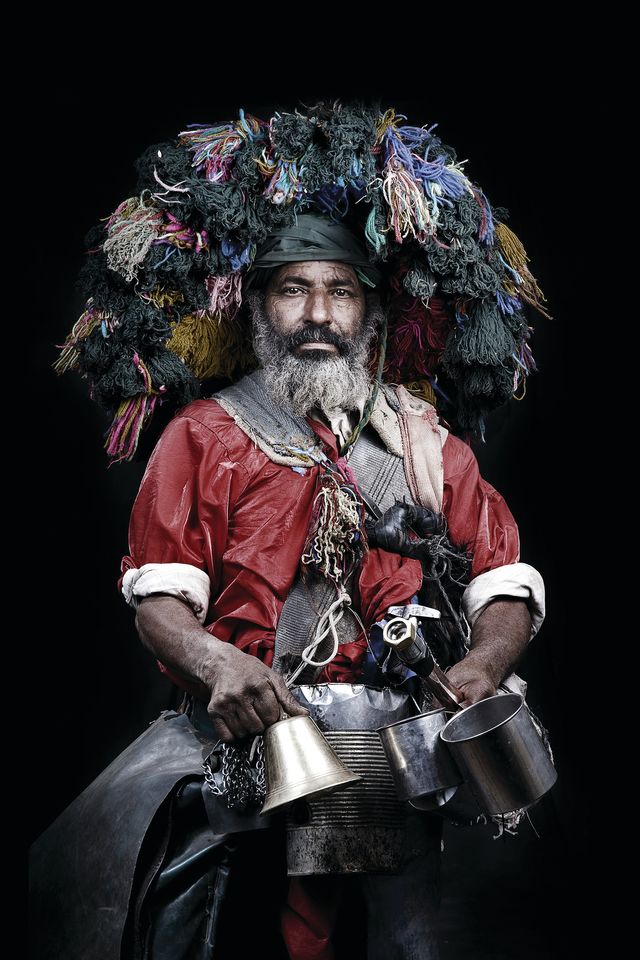 These photos were shown in the Moroccan pavilion at the 2015 World Expo in Milan, and had just finished being exhibited in the Maison européenne de la Photographie in Paris the day before she died.  The day after, King Mohammed announced that he was taking charge of the repatriation of her body, a recognition of her talent cut short as much as the fact that she was of his own kin.