Precision illumination can draw out a work’s fine details without physical intervention, but some doubt it will ever replace traditional conservation 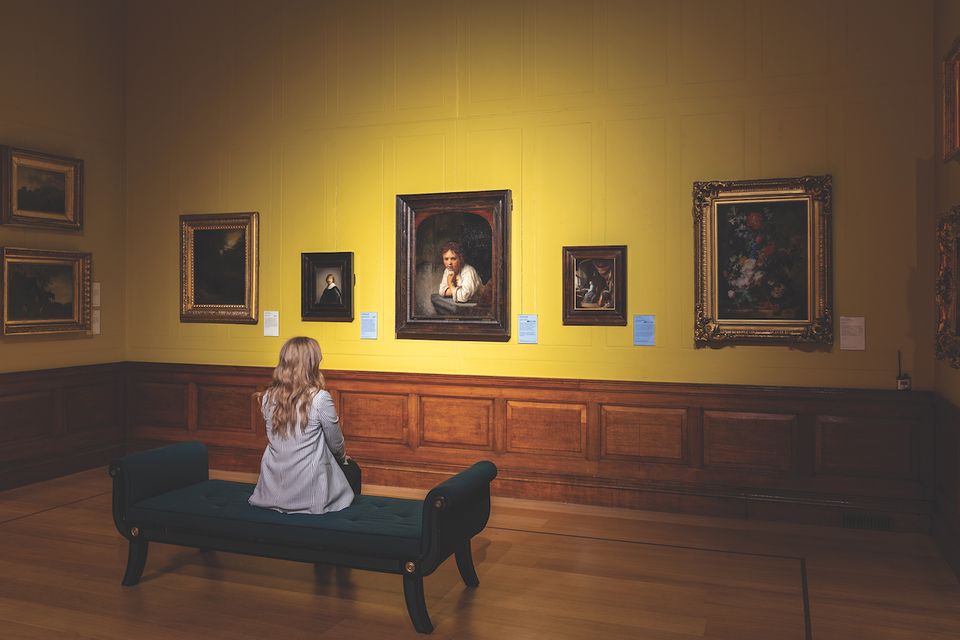 Lighting affects our perception of a work of art. Just ask Robert van Langh, the head of conservation and science at the Rijksmuseum, where the Netherlands’s most famous painting, Rembrandt’s The Night Watch, is undergoing the most ambitious -conservation effort in its 378-year history. A chance observation made when the 1642 painting was temporarily relocated to a side gallery alerted the museum staff to details that had been previously thought lost, such as the architectural background.

“There were only slight differences between the lighting in the temporary gallery and the painting’s usual situation,” explains Van Langh, “but when I looked at it with Pieter Roelofs, our head of paintings and sculpture, we both said, ‘Look at this!’ We’ve seen more things than we’ve ever seen before in The Night Watch, so that is something we are keen to optimise.”

Changes in technology over the past decade have transformed art lighting from a presentational aid to a tune-able precision tool that can function as a non-invasive means of limiting the need for traditional restoration techniques. The steady replacement of traditional halogen lamps with energy—efficient LEDs has resulted in significant savings for museums and galleries, while reduced heat emissions and little to no ultraviolet or infrared radiation have lowered (though not eliminated) the risks posed to works of art from light sources, thereby granting greater freedom to conservators and curators.

The treatment plan for The Night Watch has yet to be determined, Van Langh emphasises, and while he was not prepared to say whether lighting might offer a substitute for other conservation steps, he makes it clear that non-invasive interventions are always preferable. The subjective issue of optimal lighting will be considered like any other in the weekly discussions held by the team of 25 conservators, curators and scientists involved in the restoration effort.

Devil in the details

Van Langh insists that observations must be substantiated by science, with one likely source of data a map of the painting’s chemical constituents currently being compiled through macro X-ray fluorescence (XRF) scans. “We know very clearly from the XRF data how much more detailed the costume of Frans Banninck Cocq once was, so we will need to consider whether we should accentuate those parts where we have an idea of how it must have looked,” he says, referring to possible conservation steps.

For now, Van Langh is focused on establishing “which wavelengths of light to use so that we see as much as possible of The Night Watch”. Such a strategy may seem like common sense, but the Rijksmuseum is not accustomed to lighting works to individual specifications, nor is the National Gallery in London, which has a policy of overall consistency in lighting.

Smaller institutions have been quicker to experiment, principally because for them, replacing traditional lamps with LEDs is a more affordable and less logistically complicated process. Matthew Travers, director of Piano Nobile gallery in London, explains that LED lights are now highly adaptive, allowing individual paintings to be precisely lit while maintaining consistency throughout the room: “You can change the beam angle, warmth and brightness—LED lights have an amazing capacity for change,” he says. Unlike halogen, which becomes warmer as it is dimmed, museum-grade LEDs maintain the consistency of colours even at low levels, offering unprecedented control. 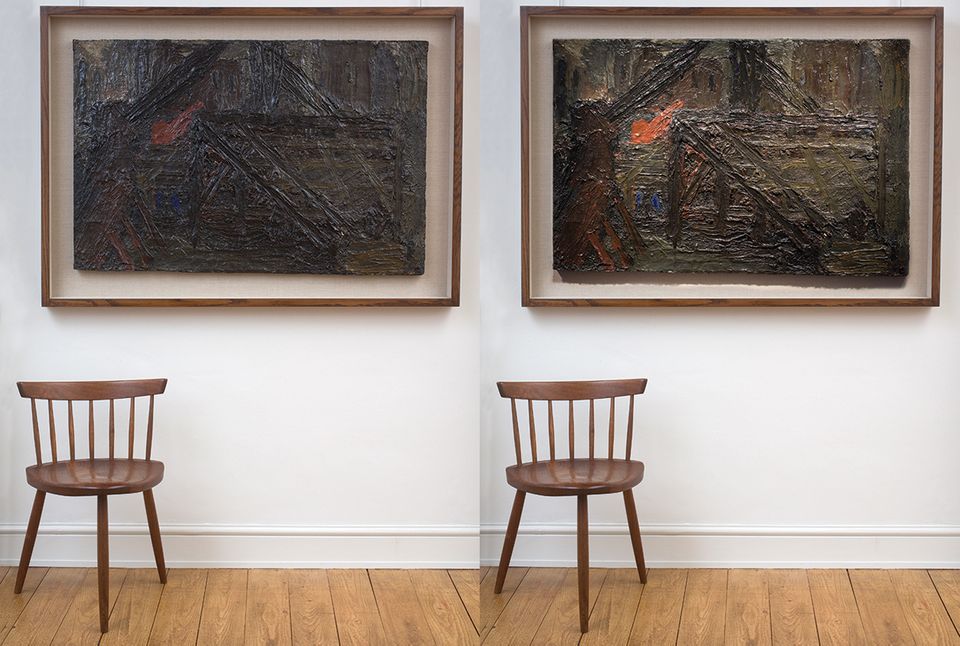 Frank Auerbach’s Building Site Near St Paul’s, Winter (around 1955) on display at Piano Nobile gallery, enhanced by a light installation (right) and without special lighting (left) Courtesy of the artist and Piano Nobile

Let there be light

For Travers, the accuracy afforded by tuneable LED lighting allows him to address shortcomings that threaten to compromise a work’s legibility. Frank Auerbach’s thick impastoed Building Site Near St Paul’s, Winter (around 1955), recently shown at the gallery, is in good condition, he explains, but it is nonetheless challenging to look at. “There’s a very deep surface to the work, with a lot of highs and lows, and it is quite shiny because of the oil paint Auerbach was using,” he says. “We’ve tried to open the work up for someone looking at it for the first time so that they’re not just overwhelmed by a dark mass.” Illuminated with a mixture of warm and cool lights, the painting is revealed as richly coloured: “Warmer light helps bring out the red, but the cooler light brings out the greys and other tones, and generally we feel it gives an overall impression of the work that is honest.”

Wireless and mobile technology has made it even easier to achieve the fine control needed for such subtle interventions. Dulwich Picture Gallery’s exhibition Rembrandt’s Light (until 2 February) showcases its new bluetooth LED lighting system, thought to be the first installed in a UK gallery. The gallery’s director, Jennifer Scott, describes it as “revelatory”, so much so that the label for A Young Man, Perhaps the Artist’s Son Titus (around 1668) needed to be rewritten once it became apparent that the painting’s background was not nearly so dark as had previously been thought.

The signature on Jacob’s Dream (around 1715), painted by the Rembrandt follower Aert de Gelder, can clearly be seen under the new lights, whereas previously it was visible only by torchlight. The shifting dynamic lighting used by the gallery to illuminate Rembrandt’s Christ and St Mary Magdalen at the Tomb (1638) conveys that the sun is rising, but more importantly it allows visitors to see the contrast between the painting in its lit and unlit states, with chromatic and tonal contrasts emerging as the light increases.

Despite her enthusiasm for this new equipment, Scott sees it as purely presentational and is sceptical about the idea that lighting might offer a substitute for traditional conservation treatments. Travers is persuaded that reversibility, safety and cost work in favour of tailored lighting applications: “Non-invasive manipulation of an art work is always better, because when you start doing something physical, you simply don’t know how it’s going to react over a long period of time,” he says.

For objects with severely deteriorated paint layers, light may offer the only means of recovering something of an earlier, more authentic state. Two darkened tempera paintings were included in Tate Britain’s William Blake exhibition (until 2 February), and thanks to “virtual retouching”, in which a digitally restored image is projected on to the original object, visitors could see The Spiritual Form of Nelson Guiding Leviathan (around 1805-09) and The Spiritual Form of Pitt Guiding Behemoth (1805) transformed from near-monochromes to the jewel-like surfaces Blake is understood to have intended.

Although virtual retouching was considered appropriate within the context of the Blake exhibition, Martin Myrone, the lead curator of pre-1800 British art at the Tate, makes it clear that it would not be considered for use in the permanent collection. There is a sense that such interventions are viewed as somewhat gimmicky, too theatrical for day-to-day use, or perhaps still too primitive.

The Tate’s experiments show that concerns about interference from shadows and bulky projection equipment are largely unfounded, although the effect of light emanating from the work itself is undoubtedly jarring. Andrew Molyneux, the founding director of the art lighting specialists TM Lighting, is enthusiastic about the benefits of virtual retouching, but he acknowledges: “There’s something about knowing that it’s artificially lit that slightly deromanticises it.”

For all that, virtual retouching is a technique with a pedigree, with the earliest recorded application of coloured light carried out in 2004. Since then, digital projections have been used to add colour to objects ranging from paintings and furniture to ceramics and ancient artefacts, with the display of Mark Rothko’s faded murals at the Harvard Art Museums in 2014 the most famous example to date.

Given the rapid rate of improvement, not just to LED technology but to digital retouching techniques, it seems likely that light will only become more important as a tool—not only for curators, but for conservators, too.