The Trump Statue Initiative, a guerrilla troupe of performers, have satirized the darkest moments of the presidency 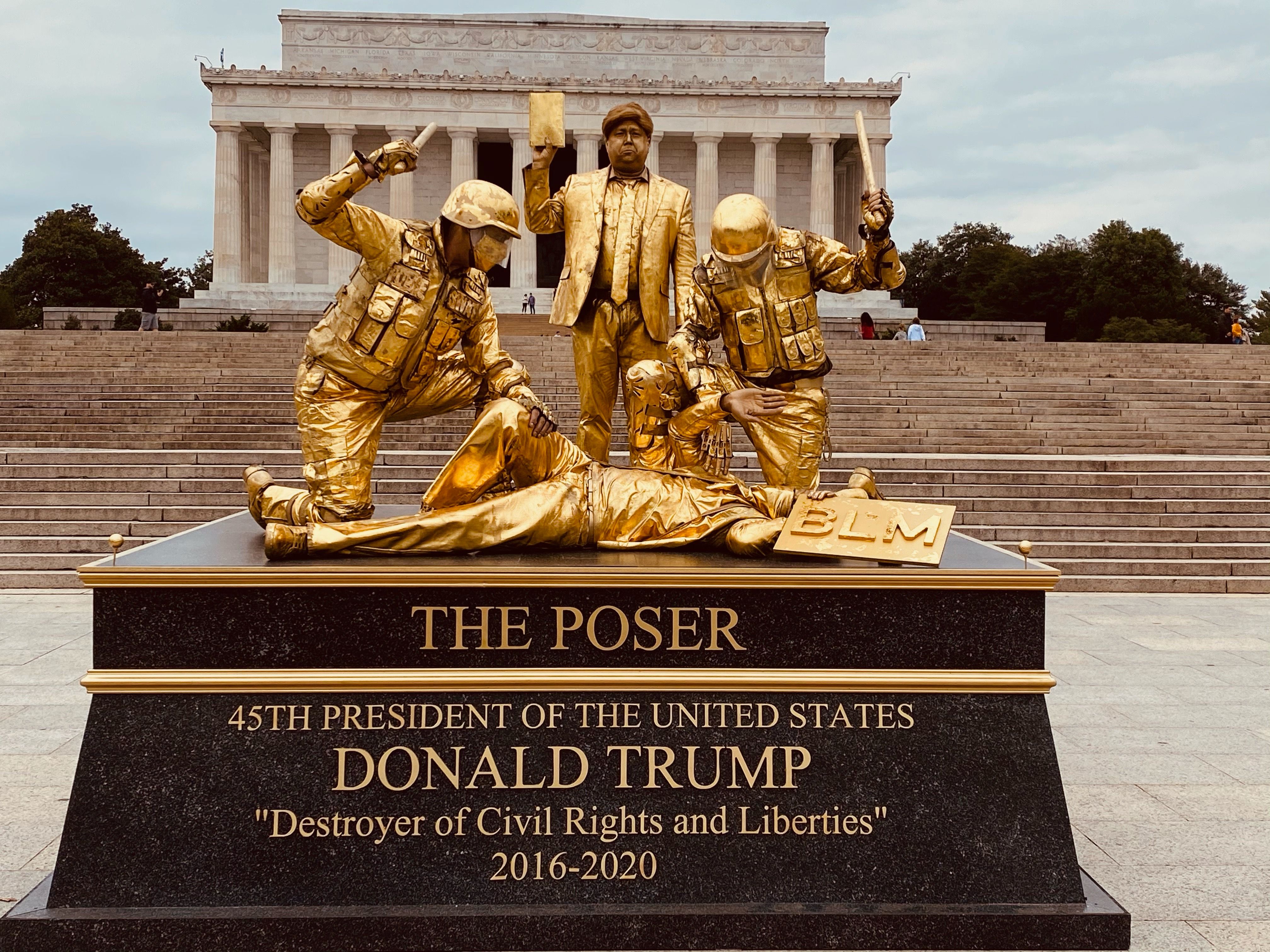 The Poser shows Trump standing holding a bible in his hands, as he did in Lafayette Square when anti-racism protests broke out across the city, while a Black Lives Matter activist is beaten by military figures at his feet

The Trump Statue Initiative, a series of guerrilla “living monuments” in which gilded actors portray particularly memorable moments of Donald Trump’s presidency, returned to the nation’s capital on Tuesday for its final installment just days before the 2020 election. "Our fourth and final install before the election looks at some of Trump's latest actions, from ramming his Supreme Court nomination down America’s throat to his total disbelief in global warming and deadliness of the Covid-19 pandemic. We also revisit arguably Trump’s darkest moment—the beating of peaceful Black Lives Matter protestors at Lafayette Square,” says Bryan Buckley, the film-maker behind the project. “We are down to the final days. If you take anything away from this… Please. Go. Vote."

Buckley said that, in addition to hoping to encourage voting and participation in the election, the catalyst that first inspired the initiative was Trump ordering the removal and tear-gassing of peaceful protestors in Washington, DC so that he could take a photo holding a bible in front of the park’s church. “This was the crystalising moment,” Buckley says, “when we were seeing everything that was wrong with the president and what he represents. The statue idea became clear to me; the irony that this racist horrible human being is trying to protect this horrid past of America was a defining moment in his presidency, so we thought a statue needed to be created to show the world. The moment was all about a photo opportunity—it was him wanting to be on Mount Rushmore—so I thought we should create an honest depiction of it. Subsequently, we started thinking of other instances to put out there to let the world know that this is the legacy that he’s leaving behind.” 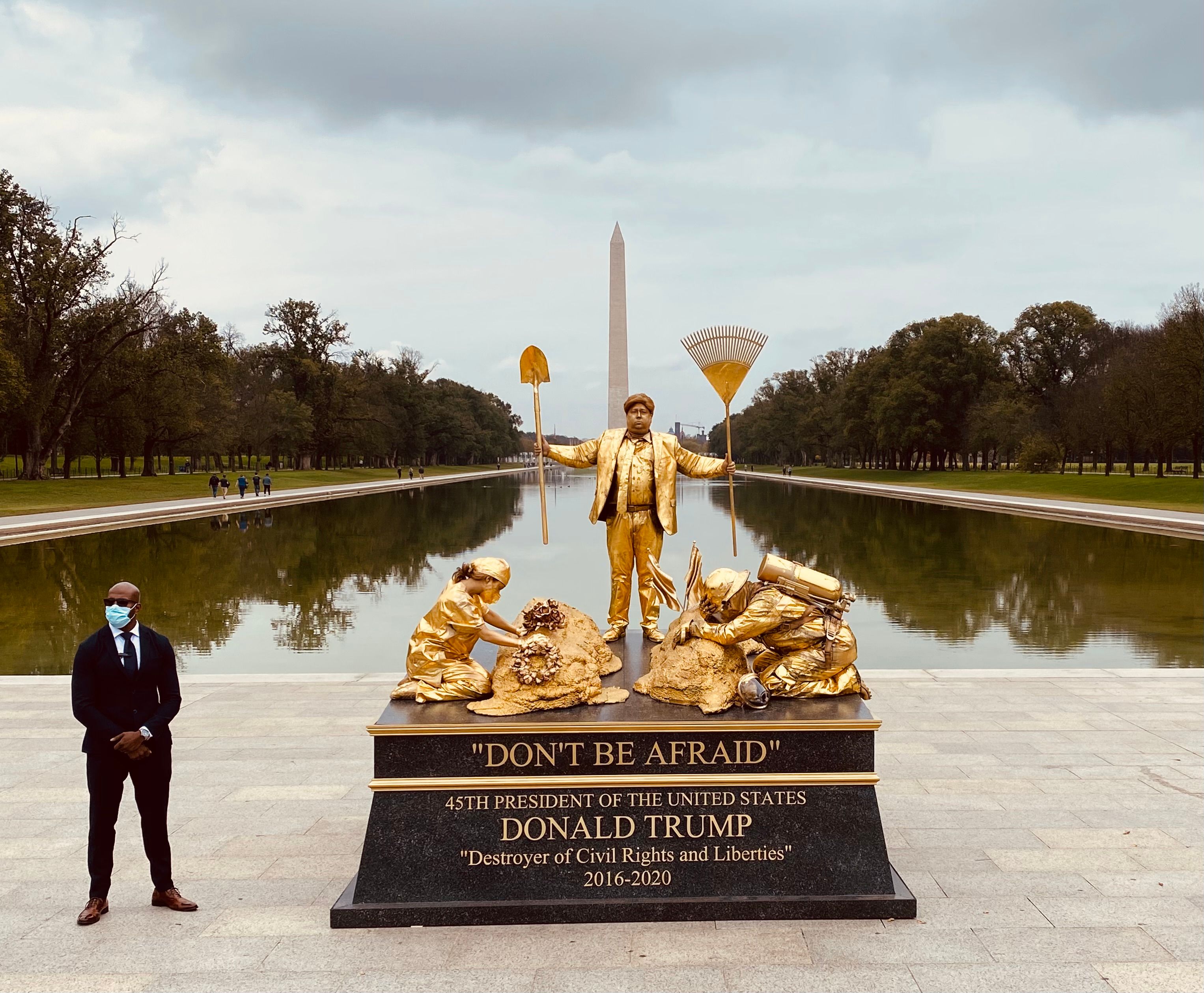 Don’t Be Afraid shows Trump standing before a mourning healthcare worker and firefighter, while he holds a rake—he has said the West Coast's wildfires are caused by leaves, not by climate change—and a shovel—presumably to dig graves for those who have died from Covid-19 due to his administration’s mismanagement of the pandemic

Since then, the project has presented around a dozen “living statues” in Washington DC, Portland, Oregon and New York over the past year. Past work have included The Final Push, which showed the president riding a golf cart over the gravestones of Covid-19 victims, and The Bunker, which showed him hiding in a bunker as he did during nation-wide protests this past May. The latest intervention featured four pieces: The Poser, which shows Trump standing holding a bible in his hands while a Black Lives Matter activist is beaten by military figures at his feet; Fill That Seat, which shows Trump urinating into a judge’s seat, referencing the controversial rushed appointment of Amy Coney Barrett to the US Supreme Court; Safety for the Suburban Housewife, which displays the president looking up a woman’s dress, and takes its title from Trump’s re-election campaign promises to protect the suburbs as women voters turn against him; and Don’t Be Afraid, which shows Trump standing before a mourning healthcare worker and firefighter, while he holds a rake—he has said are fires caused by leaves, not by climate change—and a shovel, presumably to dig the graves for those who have died from Covid-19 due to his administration’s mismanagement of the pandemic. The works were installed on the National Mall, in front of the Lincoln Memorial and directly outside of the Trump International Hotel in the Old Post Office building.

With the news cycle shifting at such an egregious pace, Buckley thought living statues, which by nature are fleeting and immediate, were an ideal vessel for his message. “Some things are consistently awful while others are surprising,” he says, “I thought it would be interesting to create something that was living and that could adjust on the fly. This gives us guerrilla ability, because it’s so much easier to run around with a base and performers than it is to run around with an actual statue. It’s ready to go in a few minutes, and we can literally run off.”

Rory Scholl, a comedian who travels the country with the Trump Statue Initiative and performs as the president in the tableaus says “the goal is to showcase Trump's ineptitude. Once we get used to one story, five more break out and we kind of forget the horrible things he's done and said. This slows things down and highlights the ridiculous, awful things he's responsible for.” Scholl adds that the responses to the project have been overwhelmingly positive, and the concept of a statue seems like the ideal form for these performances. “Trump’s really hell-bent on saving these old Confederate statues,” Scholl says, “so if he likes statues of losers, that's what we're going to give him.”