The National Gallery acquired Self-portrait as Saint Catherine of Alexandria (1615-17, far left) and hopes to secure loans of Self-portrait as a Lute Player (1615-18, centre) from the Wadsworth Atheneum Museum of Art and the Royal Collection’s Self-portrait as the Allegory of Painting (1638-39)

In 2020, the National Gallery in London is to hold a major exhibition on Artemisia Gentileschi, arguably Europe’s greatest female Old Master (April-July 2020). This follows its recent purchase of her Self-portrait as Saint Catherine of Alexandria (1615-17). The newly conserved painting went on display today (19 December).

The exhibition will be focused on paintings that have almost universally accepted attributions, excluding those that are seriously questioned by some specialists. Letizia Treves, the National Gallery’s curator, says that this will enable us to see “the real Artemisia”.

In recent decades, there has been growing interest in the artist, because of both her astonishing personal story and increasing concern that female painters have been underrepresented in art history and museum displays.

Treves points out that Artemisia's “life story is intertwined with her art”. Born in Rome in 1593, she was trained by her father Orazio Gentileschi, a distinguished follower of Caravaggio. At the age of 17 Gentileschi was raped by the painter Agostino Tassi and then faced a gruelling court case. She went on to paint numerous self-portraits in which she appears in various roles. In 1639 Artemisia joined Orazio in London where he was working at the court of Charles I. She died in 1654 or shortly afterwards, probably in Naples.

Increasing attributions dilute our sense of quite how good she is Letizia Treves, the National Gallery’s curator

In recent years, the number of paintings attributed to Gentileschi has risen considerably. Ward Bissell, who published a catalogue raisonné in 1999, accepted 53 autograph works and since then dozens more have been attributed by other specialists, dealers and auctioneers. Treves says that only around 25 now have universal scholarly acceptance, although she believes that there are more and hopes to borrow around 35 for the National Gallery’s show. Treves says that our view of Gentileschi has been “muddied by increasing attributions, diluting our sense of quite how good she is”.

Loan requests are now being considered by owners, but the most important single work is likely to come from the Wadsworth Atheneum Museum of Art in Hartford, Connecticut. It owns Gentileschi’s Self-portrait as a Lute Player (1615-18), painted around the same time as the National Gallery’s acquisition. The Royal Collection’s Self-portrait as the Allegory of Painting, a much later work (1638-39), would also represent a key loan.

Asked whether Artemisia or her father Orazio was the greater painter, Treves responds that “I have always been a great admirer of Orazio and have really grown to like Artemisia”.

The National Gallery’s director, Gabriele Finaldi, admits that “all of us who go to museums are surprised that the vast majority of what you see is by male artists”. He describes Gentileschi as “an absolutely beacon figure” amid the growing interest in female artists.

Journey to the National Gallery 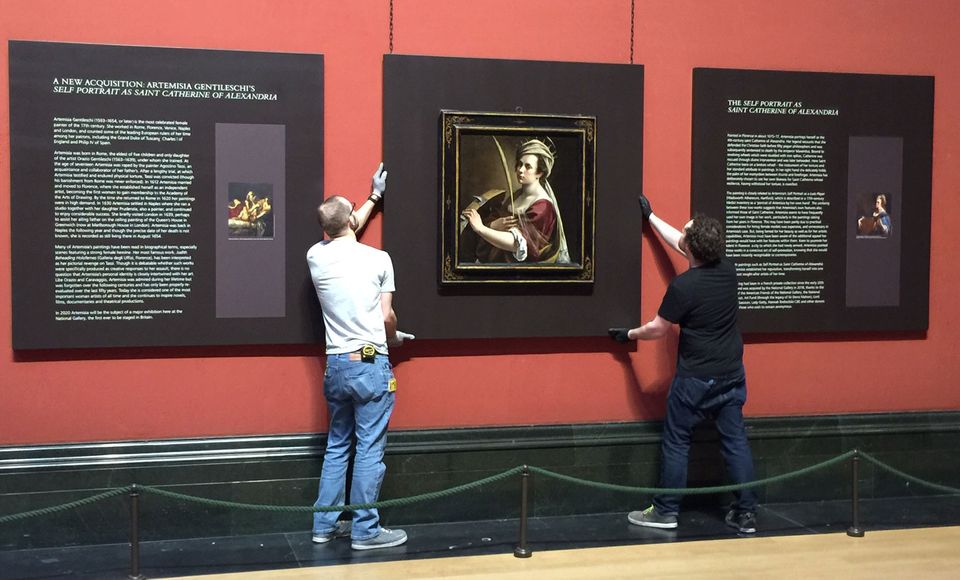 Artemisia Gentileschi’s Self-portrait as Saint Catherine of Alexandria (1615-17) was a previously unknown work, which came up in a Parisian auction held by Christophe Joron-Derem at Hôtel Drouot in December 2017, with an estimate of €300,000 to €400,000. It sold to two dealers, Milan-based Marco Voena and London-based Fabrizio Moretti, for €2.4m (with fees). The National Gallery then bought the painting at a substantial mark-up for £3.6m, mainly with funds from its American Friends. The picture has now been cleaned, revealing the quality of the work and confirming the Gentileschi attribution.

The gallery trustees were concerned about the lack of a detailed Nazi-era period (1933-45) provenance, so they decided that the Gentileschi should be placed on its list of works with an “incomplete provenance”. Although the picture’s acquisition by the family is unrecorded, it was apparently owned by Charles Marie Boudeville during the 1933-45 period and was sold by his grandson Nicolas at the 2017 auction.