Major surprise was last-minute withdrawal of Goya sketch at Christie's

The final evening sales of the year in London yielded reassuring results for the Old Masters market.

Sotheby’s put on a modest-sized but successful sale that was anchored by works from four private collections—those of the Marquess of Lothian, the Forbes Collection, the Rutter Collection and the Von Lenbach Collection.

Italian paintings fared well on the night. From the Von Lembach collection, a 15th-century Sienese gold-ground work, Flagellation (1441), by the Master of the Osservanza, climbed past its upper estimate of £600,000 and sold for £1.2m (£1.4m with fees) to a representative from Moretti Gallery, following a lengthy bidding battle with Robin Katz, the son of the dealer Daniel Katz. Meanwhile, from the Forbes collection, Lorenzo Lotto’s recently discovered Portrait of an Architect (1540s) fetched £340,000 (£416,750 with fees), while Titian’s Portrait of Two Boys, said to be members of the Pesaro Family (around 1544), sold for £1.8m (£2.1m), the fourth-highest auction price for the artist.

Eighty percent of lots exceeded their pre-sale expectations, pushing the sale total of £12.2m (£14.8m with fees), comfortably above the £7.9m-£11.9m estimate. “The collections at the core of the sale provided a good backbone,” said Alex Bell, the co-chairman worldwide of Sotheby’s Old Master painting department, after the sale. Such a high number of works selling above estimate might seem unusual in an Old Masters sale, but bidders were spurred on by some very conservative pricing. “With works that have been off the market for hundreds of years, there is no real indication of their value,” Bell says, “and there is also less pressure from the vendors.”

On the following evening, Christie’s made a marked improvement following a disappointing sale this time last year. Against an initial estimate of £13.6m-£20.3m, the house fetched £10.1m £12.2m (with fees), selling 80% of its lots. The only reason the total was below estimate, however, was because the evening carried two casualties: Bernardo Bellotto’s painting of the Fortress of Königstein (around 1760; est £2m-£3m) failed to find a buyer, while the star lot of the evening, a small sketch by Goya of a Woman and Two Boys by a Fountain (1786-87; est £4m-£6m), was pulled by its consigner Borja Thyssen Bornemisza at the last minute. The latter's absence means the house's revised sale estimate was £9.6m-£14.3m. 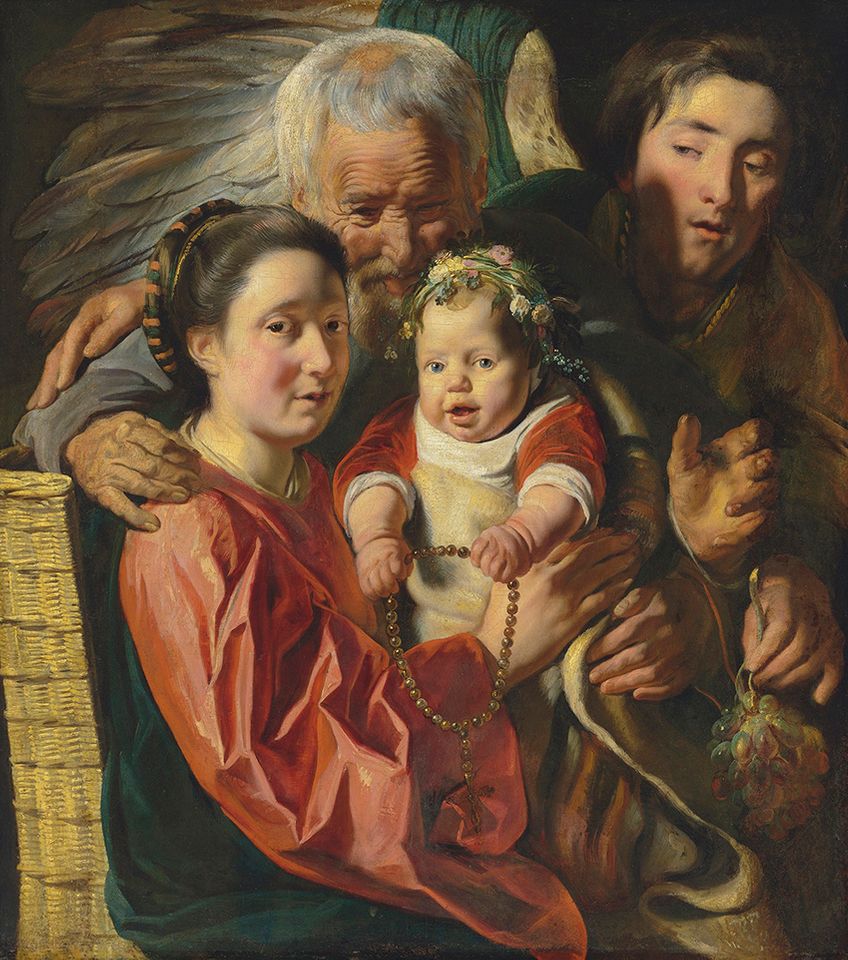 Jacob Jordaens' Holy Family with an angel sold at Christie's for £1.8m with fees

Nevertheless, there were plenty of shows of strength. Jacob Jordaens’ The Holy Family with an angel (1625-26), which carried a modest estimate of £500,000-£800,000, ended up selling for £1.5m (£1.8m with fees), and auction records were set for François Clouet, Corneille de la Haye, Jean Decourt, Battista Zelotti and and Judith Leyster. The latter’s rediscovered self-portrait (painted around 1650) fetched £400,000 (£485,000 with fees). The world expert on Leyster had searched for this rumoured portrait all her life, in vain, until she finally found it in the Christie’s catalogue. Christie’s staff said she had tears in her eyes when she finally saw it in person.