Conservators at the Courtauld Gallery in London believe that its version of Manet’s Le déjeuner sur l’herbe is not just a copy of the larger painting at Paris’s Musée d’Orsay, but a preparatory work for the picture in the French institution. This new theory contradicts the view of John House, the UK institution’s expert on Impressionism until his death in 2012, who was “virtually certain” that the Courtauld’s version is “a replica, made after the big one was completed, and refining its arrangement in minor ways”, possibly even completed “a few years later”. This version was also exhibited as a later copy at a 2013 show at the Royal Academy of Arts. 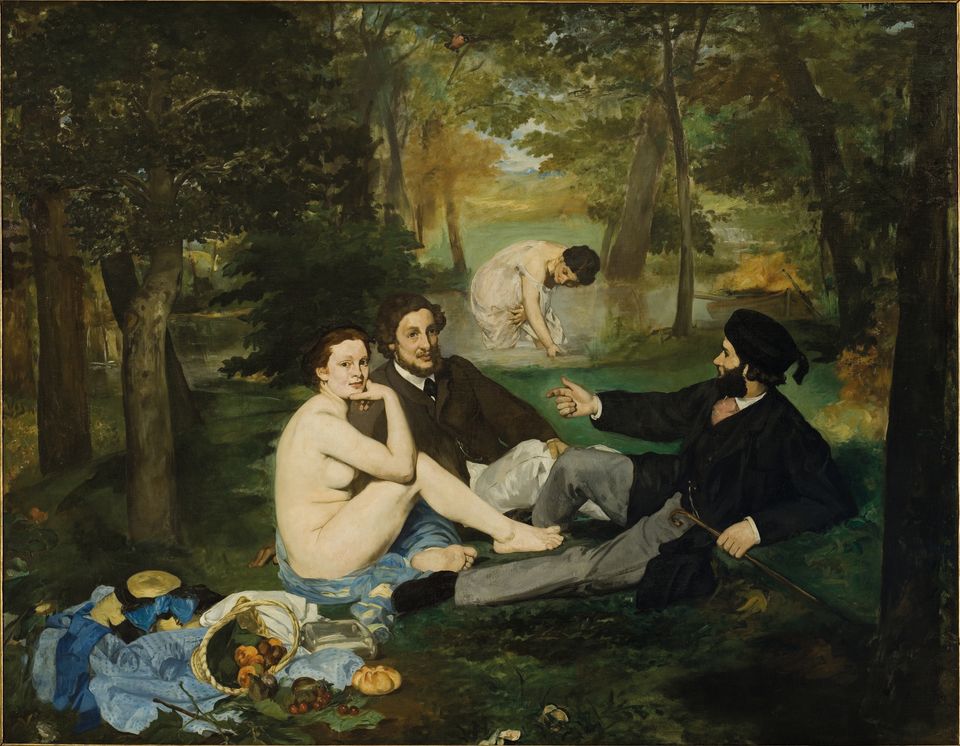 Karen Serres, the Courtauld’s curator of paintings, now believes that their version was “part of the long preparatory process for Manet’s Salon painting, rather than a later reworking.”

The picture depicts three central sitters: the model Victorine Meurent who posed naked; one of the artist’s brothers (either Gustave or Eugène); and Manet’s brother-in-law, the Dutch sculptor Ferdinand Leenhoff, who is shown wearing a hat. The Paris Salon of 1863 rejected the larger version of Le déjeuner sur l’herbe and it caused a scandal when it was then exhibited at the Salon des Refusés.

Thick, yellowed and degraded Manet gave the Courtauld painting, which measures 90cm by 117cm, to his friend Hippolyte Lejosne, whose family sold it in 1924. Four years later the British collector Samuel Courtauld bought it for £10,000. The larger version (207cm x 265cm), completed in 1863, was donated to the Louvre in 1906 and is now in the Musée d’Orsay.

The Courtauld picture first underwent conservation treatment in 1890 when the artists Edouard Vuillard and Maurice Denis removed old varnish before revarnishing it. In 1952, surface grime was removed and, in 1976, a new layer of varnish was added. After 126 years, the thick, yellowed and degraded varnish had obscured the painting.

Earlier this year Maureen Cross, a conservator at the Courtauld, removed the varnish and examined the painting using macro X-ray fluorescence scanning, which helps to identify pigments, and scanning multispectral infrared reflectography, a non-invasive method of looking beneath the paint surface. Pentimenti were visible once the varnish was removed, including alterations to the curve of the back of the female nude and Leenhoff’s cap, suggesting that the Courtauld picture is a preparatory work.

The style of the painting is also more of what one would expect from a preparatory work. The cleaning has emphasised the contrast in the levels of finish, from the thin washes loosely applied in sections such as the back of the landscape to areas of carefully crafted impasto as seen in the main figures.

There are several minor differences between the versions in London and Paris. For example, the Courtauld picture shows Leenhoff’s right hand almost reaching the other man, whereas in the Paris painting there is a gap. The Louvre picture does not appear to have pentimenti and the handling of the paint is more uniform, which suggests that it is the final version.

Grid for rescaling The recent investigation of the London version, which was completed in October, also revealed that the signature—deemed authentic as the black pigment is the same as that used for the coat of the figure on the right—was added after the main picture had dried, whereas a commissioned replica probably would have been signed immediately. A grid for rescaling was discovered beneath the painting. Although interesting, this could mean it was either a preparatory work or a replica. A more detailed examination of the Musée d’Orsay’s painting might yield further insights.

The Courtauld’s Le déjeuner sur l’herbe is due to go on short-term loan to the Ferens Art Gallery in Hull in late April as part of the city’s 2017 UK City of Culture celebrations.