UPDATE: After this article went to press, Franz West's widow, the artist Tamuna Sirbiladze, died of cancer, aged 45. Her lawyer, Christoph Kerres, says: "We are all in shock about the sudden death of Tamuna. And we do hope that the foundation will ease the way a little to support the needs of the children, who have lost both parents in such a short time."

Significant change is afoot in the estate of the Austrian sculptor Franz West, which has been mired in legal turmoil since the artist’s death in 2012.

The disputes stem largely from the fact that, five days before his death, the artist established the Franz West Private Foundation, based in Vienna. The decision diverted the royalties, copyrights and assets that would have gone to his widow and the non-profit Franz West Archive, also in Vienna, to the new foundation instead. Since then, the archive has attempted to regain control by launching several lawsuits against the foundation and the dealers it works with, including Gagosian Gallery.

Some suggest that the lawsuits between the archive and the foundation are part of an underlying power struggle between David Zwirner, which represented West until 2001, and Gagosian Gallery, which has represented him since. “Zwirner and Gagosian fight,” says the collector and dealer Adam Lindemann, “and West always suffers”.

Resolution with widow At the time of publication, a resolution appeared to be nearing on one front. Both the foundation and a lawyer for West’s widow, the artist Tamuna Sirbiladze, said they were optimistic that a settlement could be reached between the two parties in as little as a few weeks. Sirbiladze’s lawyer, Christoph Kerres of the Vienna-based firm Kerres Partners, said that West’s wife and their two children should have received at least 50% of his estate, valued in the “high double-digit millions”. A settlement would probably reinstate Sirbiladze as the rightful owner of a percentage of West’s work, while allowing the foundation to continue “administering” the art, Kerres says.

Ines Turian, the foundation’s director and West’s former studio manager, agrees that its ongoing negotiations with West’s family have been “positive”. “We hope the dispute will be settled very soon,” she says. If an agreement is not reached, Kerres says he will take the matter to court.

Foundation vs archive The feud rages on between the foundation and the archive, however. The foundation considers itself “the one and only legitimate representative of the artistic will of Franz West”, Turian says. Meanwhile, the archive is seeking to strengthen its standing by merging with the Vienna Museum of Modern Art (Mumok), which Edelbert Köb, the gallery’s former director and current president of the West archive, says ought to “be a guarantee for expert authentication”.

Köb says he hopes this move will end the archive’s dispute with the foundation, which has escalated to new heights in the past year. In April 2015, a Vienna court sided with the archive, deciding that West’s last-minute deeds were not strong enough to supersede his previous contracts, which granted the archive exclusive rights to manufacture and sell much of West’s furniture and to license photographs of his work.

The foundation, however, continued to produce the furniture in Austria and, a few months later, sold it through Gagosian Gallery in New York and Galerie Eva Presenhuber in Zurich. Both exhibitions spurred new lawsuits from the archive, this time aimed at the galleries. Representatives of Eva Presenhuber and Gagosian did not respond to requests for comment.

Gallery relationships Although Zwirner is still active in West’s secondary market, a spokeswoman for the gallery says that allegations of any dispute with Gagosian are “not true”. David Zwirner Books plans to publish a catalogue on West, from the gallery’s 2014 exhibition, that features an essay by Eva Badura-Triska, who co-founded the archive in 1999 with West and others. Zwirner acted as an early adviser to the founders during the formation of the archive, but has not played a role in its operations since, a spokeswoman says. Ealan Wingate, a director at Gagosian, is on the foundation’s advisory council. Ines Turian maintains that the foundation is fully independent, too. “It is not true at all that [it] is operating on behalf of Gagosian Gallery,” she says. A spokeswoman for Gagosian did not comment on a possible dispute with Zwirner. Nevertheless, the situation remains unclear within the artist’s market. “Since West’s death there seem to be several rivalling parties,” says Larissa Hilbig, who, with her partner, Harald Falckenberg, has bought West’s work, “and it’s very difficult to keep their interests apart”. 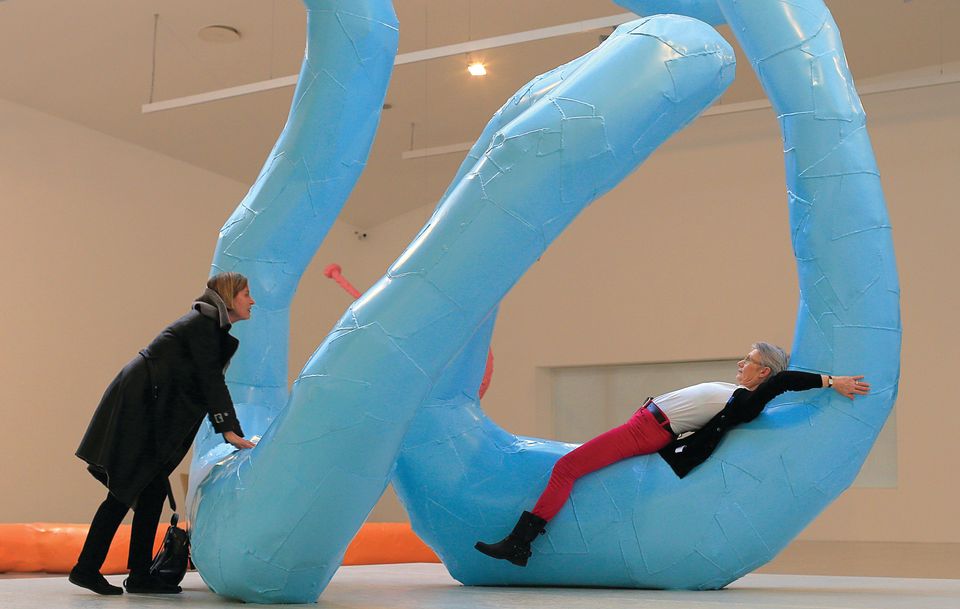 Wild West: “Surreal” authentication issues Several collectors of Franz West’s art suspect that the relationships between his foundation and archive and galleries are too complicated to allow for clear authentication. One collector, who asked to remain anonymous because he currently has works under consideration with the Franz West Archive, suspects that the rejection of five works which he bought in Europe was an attempt to suppress the secondary market. “It’s a money-grabbing act of market surrealism: Ceci n’est pas une pipe; Ceci n’est pas un Franz West,” he says.

Edelbert Köb, the president of the archive, says these allegations often arise after the death of a blue-chip artist and “insult the validity of any authentication by any artist or authentication board”. Meanwhile, Ines Turian, the director of the Franz West Private Foundation, says that collectors are welcome to bring unauthenticated work there instead. “[The foundation is] happy to examine each work by Franz West and ask collectors to contact us”, she says. The foundation is also compiling West’s catalogue raisonné, the first volume of which is due to be published in spring 2017.