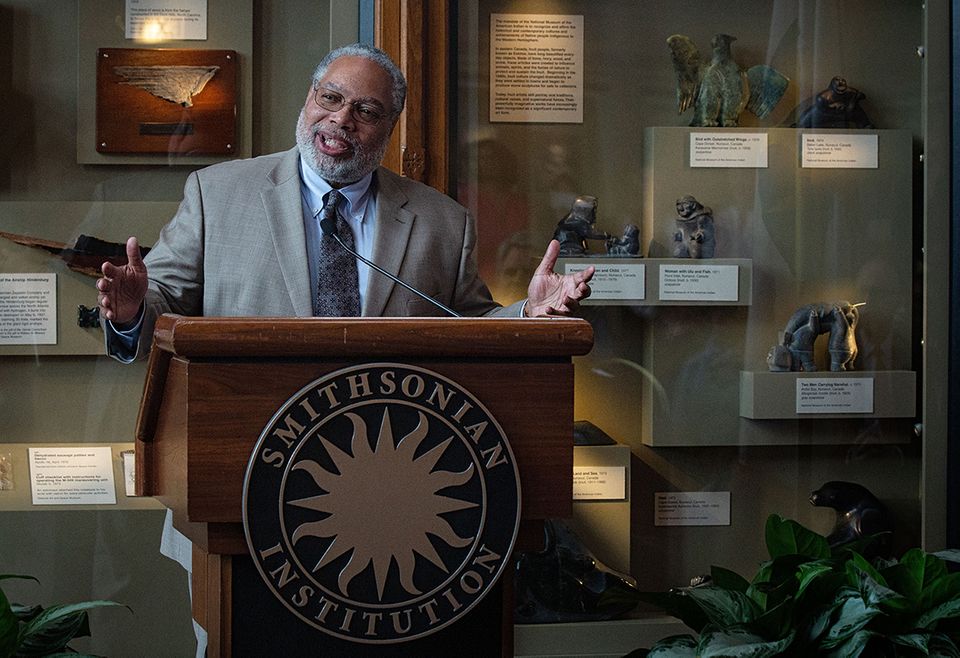 This morning, the Smithsonian Institution’s Board of Regents elected Lonnie G. Bunch, the founding director of the organisation’s National Museum of African American History and Culture, as its 14th secretary. Bunch is the first African American, and first historian, to lead the institution since its founding in 1845. He has been a member of the Smithsonian community off and on for nearly 40 years, starting with his tenure as an education specialist and historian at the National Air and Space Museum from 1978 to 1979. Bunch is due to take over as Smithsonian secretary on 16 June.

“In looking for someone who would shepherd the Institution into the future, we wanted to find a special person with equal parts talent and passion,” the co-leader of the 11-member search committee which launched in December, David Rubenstein, said in a statement. “Fortunately, the ideal choice for our next Secretary was already an integral part of the Smithsonian family.”

“I am both humbled and honoured by this opportunity,” Bunch told supporters of the NMAAHC in an email today. His appointment to secretary comes nearly 14 years after he became the leader of the NMAACH in July 2005. The museum opened on the National Mall in Washington in September 2016, and has since had around 4 million visitors.

Bunch worked at the National Museum of American History from 1989 to 2000, including serving as its associate director for curatorial affairs from 1994 to 2000. Before joining the NMAAHC, he was the president of the Chicago Historical Society from 2001-05. He replaces David Skorton, a cardiologist who has served as secretary since 2015, whose departure was announced in December. The NMAAHC opened under Skorton’s tenure, during which time the Smithsonian also announced its collaboration with the Victoria & Albert Museum in London and re-opened the Freer and Sackler Galleries after a major renovation.

“Lonnie Bunch guided, from concept to completion, the complex effort to build the premier museum celebrating African American achievements,” John G. Roberts, Jr., the Smithsonian Chancellor and Chief Justice of the United States, said in a statement about the appointment. “I look forward to working with him as we approach the Smithsonian’s 175th anniversary, to increase its relevance and role as a beloved American institution and public trust.” Roberts, along with the Vice President Mike Pence, is an ex-officio member of the Smithsonian’s Board of Regents, which is also made up of members from the Senate and the House of Representatives, and nine citizens.

As the Smithsonian secretary, Bunch will oversee the largest museum, education and research complex in the world: 19 museums, including the NMAAHC, National Portrait Gallery, Hirshhorn Museum and Sculpture Garden and the Cooper Hewitt, Smithsonian Design Museum; the National Zoo; research centres such as the Archives of American Art and the Smithsonian Tropical Research Institute; and education centres. Sixty-two percent of its funding is from the US federal government, with $1bn in federal funding for the 2019 fiscal year (1 October 2018-30 September 2019).

“I am excited to work with the Board of Regents and my colleagues throughout the Institution to build upon its legacy and to ensure that the Smithsonian will be even more relevant and more meaningful and reach more people in the future,” Bunch said in a statement. Among his major endeavours will be helping to implement the Smithsonian’s five-year strategic plan, launched in 2017, which aims to “reach 1 billion people a year with digital-first strategy” and “preserve natural and cultural heritage while optimising our assets” and “understand and impact 21st-century audiences” among the plan’s stated goals.

Bunch has asked the historian Spencer Crew, formerly the director of the National Museum of American History and a member of the NMAAHC’s Scholarly Advisory Committee (SAC) for its inaugural exhibitions, to serve as the NMAACH’s interim director. “Please know I am leaving the [NMAAHC] in very good hands,” Bunch told museum supporters in his email announcement.