Looted coffin acquired by Metropolitan Museum is headed back to Egypt 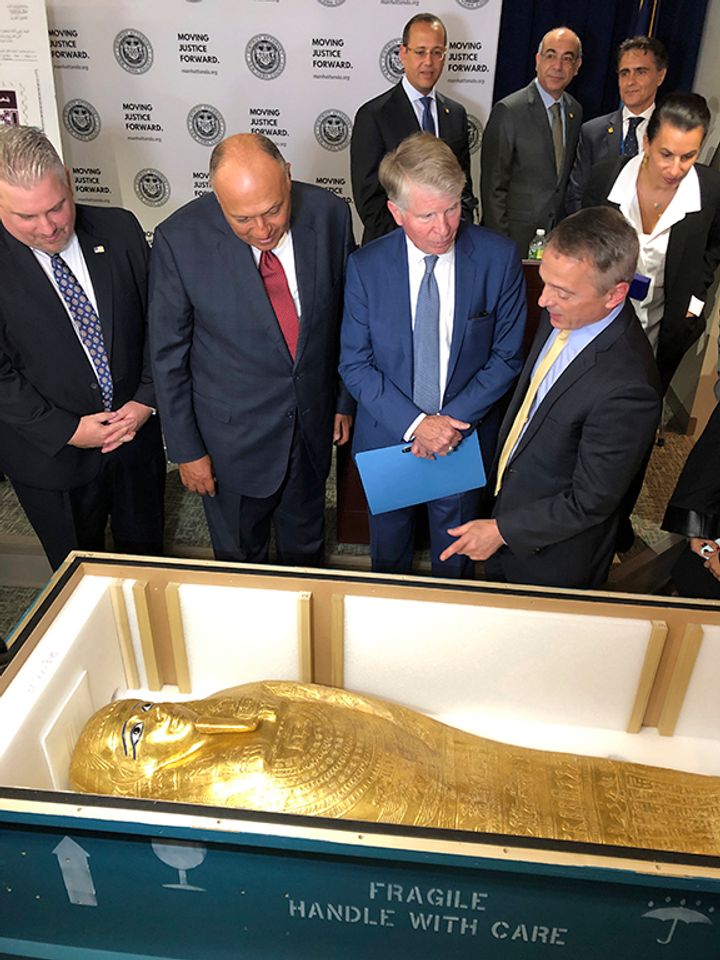 A looted gilded coffin that was removed from display this year at the Metropolitan Museum of Art is headed back to Egypt after a repatriation ceremony in New York attended by an Egyptian minister and a US Department of Homeland Security Investigations agent.

The Manhattan district attorney, Cyrus Vance Jr, announced the handover on Wednesday, which was the result of an investigation by his office’s antiquities trafficking unit in cooperation with law enforcement agencies in Egypt, Germany and France.

Vance’s office and Homeland Security officials had executed a search warrant in February and confiscated the coffin from the Met, where it had been on view as the centerpiece of an exhibition. The coffin was crafted in Egypt between roughly 150 and 50BC and is thought to have once held the remains of a high-ranking priest, Nedjemankh.

The museum had acquired the coffin in July 2017 from what it described as a private collection under the understanding that it had been legally exported from Egypt in 1971. It turned out that the museum had been given fraudulent documents: the gilded coffin had actually been looted in the Minya region of Egypt in 2011 and then smuggled out of the country.

After leaving Egypt, Vance’s office said, the coffin was transported through the United Arab Emirates to Germany, where it was restored before travelling to France. The Met has said that it purchased the coffin from the Paris-based dealer Christophe Kunicki for €3.5m.

Vance’s office said that the Met had “fully cooperated” with law enforcement agents once museum officials learned that it had been stolen.

A Homeland Security official said that such investigations had strengthened his department’s relationships and connections with the art world. “The high profit business of smuggling and trafficking antiquities has been around for centuries,” said Peter C. Fitzhugh, special agent-in-charge for the department in New York. “But it is the responsibility of a buyer to confirm the proper provenance of a piece of art or antiquity.”

“The tremendous collaboration between HSI New York and the Manhattan DA in building art cases has allowed us to strengthen relationships within the art world, both domestic and global; develop investigations to track the illicit movement of stolen art and locate its final destination; and, return the priceless cultural property to its rightful homeland for its citizens to enjoy,” added Fitzhugh, who attended the repatriation ceremony with the Egyptian minister of foreign affairs, Sameh Hassan Shoukry.

The district attorney’s office has declined to say whether it anticipates imminent arrests in connection with the looted coffin. To date, it says, its antiquities trafficking unit has recovered several thousand stolen antiquities jointly valued at more than $150m, many of which have been returned to their rightful owners.