Following protests outside of Paris’s Musée du Louvre on 1 July that called for its Sackler galleries to be retitled, the family name has allegedly been surreptitiously removed from the Oriental and Antiquities wing, as well as from the website.

In an interview with journalist Thomas Hughes on the French radio station RTL on Tuesday, Jean-Luc Martinez, the president of the Louvre, said in response to a question about the protests that no room in the museum needed to be renamed because none still bore the name “Sackler”. The statement marks the first time Martinez has spoken directly about the protests earlier this month.

The museum previously confirmed that the eponymous billionaire family of art philanthropists behind the pharmaceutical company Purdue Pharma, which is accused of fuelling the US opioid crisis, had donated to the refurbishment of a dozen rooms displaying Persian and Levantine art between 1996 and 1997. The activist group Pain (Prescription Addiction Intervention Now), also present at the 1 July protest, claimed the Louvre was not contractually bound in perpetuity to display the Sackler name, which is prominent at many art institutions around the world as a result of financial support given by the family.

According to Martinez, there is a 20-year statute of limitations to donor name rights, further suggesting that the galleries had not borne the name since 2017—a bylaw that had not been publicly shared before.

Yet the museum's website and the plaques at the entrance to the Sackler Wing rooms were clearly marked with the family name just weeks ago, according to images taken by Pain. In a statement issued today, the group claims that within the last day, Sackler attributions were gradually removed from the museum's website and, as of this morning, plates at the entrance to the formerly named rooms had been removed or covered with tape. 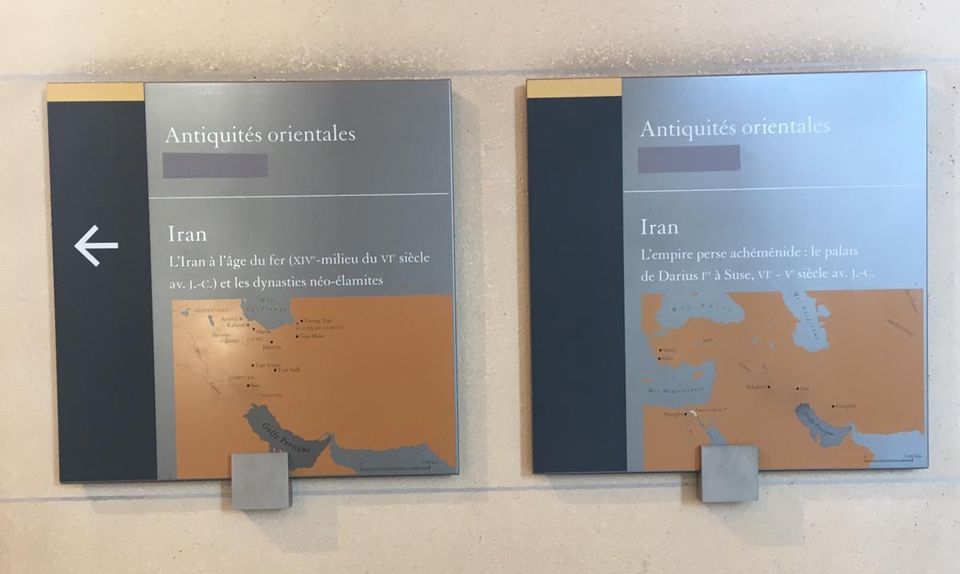 “We protest against this attempt to rewrite history and call on Jean-Luc Martinez to rectify his statements as soon as possible in order to make official the removal of the Sackler name from the Louvre,” the group says, adding that they want to “take the liberty of anticipating this official announcement, which may never be coming, and announce that the Sackler name, in the 12 rooms of the Louvre’s Wing of Oriental Antiquities, have been removed”.

The Louvre did not respond to requests for comment at the time of publication of this article.

As the most visited museum in the world, protesters have urged the Louvre to set a precedent for other institutions by removing the family name from its galleries. Led by the US-based photographer Nan Goldin, the 1 July protest saw the artist wade into the fountains beneath the Louvre’s iconic glass pyramid with more than a dozen activists carrying red banners stating that read: “Take down the Sackler name.”

Goldin has been outspoken against Sackler support in the arts after she became addicted to powerful prescription painkillers. She has previously demanded that arts institutions in the US and UK refuse further Sackler donations and has argued that the family should fund treatment and rehabilitation for opioid addicts.

London’s National Portrait Gallery became the first major art institution to drop a plan for a grant from the Sackler family in March—a move that campaigners said was a landmark victory when it comes to ethics in art funding. Since then several notable institutions, including New York’s Metropolitan Museum of Art and the Guggenheim museums, have also said they will not accept future Sackler donations.

“Those of the institutions who have refused future donations from the Sackler family, we commend you for taking the first steps,” Pain says. “Now it is time to take the next step and take down the name of this criminal family.”

Update: An earlier version of this article stated that Martinez said the Sackler family's last donation to the museum was in 1993. This was a mistake on his part; the last donation was made in 1997 as confirmed in previous statements by the museum.