Made for each other: Moholy-Nagy and the Guggenheim rotunda

The Solomon R. Guggenheim Museum in New York is notoriously inhospitable to art. (With all due respect to Frank Lloyd Wright, it takes chutzpah to build a museum whose main exhibition space is largely devoid of flat walls.) The rotunda’s sweeping vistas often drown out individual works of art; the winding ramps encourage visitors to forge onward rather than pause in front of an object for closer examination.

But the Guggenheim’s most successful shows turn the building’s challenges into strengths. They focus on bodies of work that benefit from a linear, chronological presentation and from being shown en masse. (On Kawara is a perfect example.) The building may not always allow you to study exactly how a particular work of art was made, but it can help you walk away with a better understanding of how an artist thinks.

By these standards, the Hungarian artist and Bauhaus pioneer László Moholy-Nagy is a dream candidate for Guggenheim treatment. The artist’s first US retrospective in more than 50 years, Future Present (until 7 September) brings together more than 300 works in every imaginable medium to show how a law student and aspiring poet became one of the most experimental artists and influential teachers of the 20th century.

Moholy-Nagy—one of the first artists the Guggenheim collected in-depth—would have probably loved Wright’s coiled ramps. The artist joined the Bauhaus after he was discharged from the Austro-Hungarian Army during the First World War. Like his Bauhaus brethren, he believed that blurring the lines between architecture, art and design was the key to progress. And like the Guggenheim, always pushing you to move up its sweeping ramps, he believed progress meant not looking back. “The reality of our century is technology: the invention, construction and maintenance of machines. To be a user of machines is to be of the spirit of this century,” he once said. 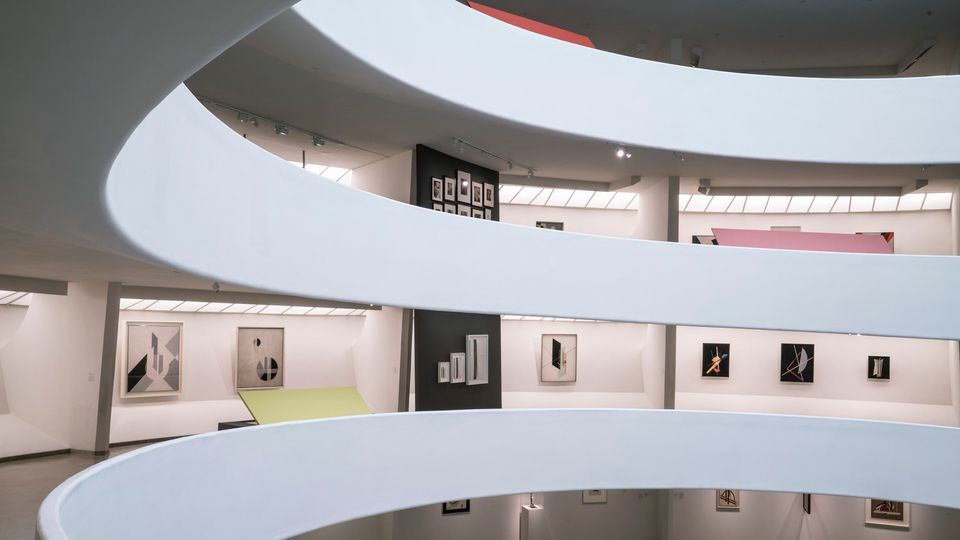 The Guggenheim show combines the photograms (cameraless photographs) for which Moholy-Nagy is best known with collages, films and paintings. US audiences may be most surprised by the sculpture-painting hybrids he called Space Modulators, for which he used Plexiglass, paint and light to create interlocking shadows along the wall.

Although individual works—especially the paintings—are not particularly memorable (another reason why they benefit from the Guggenheim’s all-at-once rotunda presentation), the serial quality of Moholy-Nagy’s output is said to have inspired the US Minimalists in the 1960s. To create a set of three enamel paintings with the same geometric design in different sizes, Moholy-Nagy supposedly called a factory and gave them specific instructions over the phone. Forty-five years later, the US Minimalist sculptor Tony Smith would make a similar call.

Fittingly, perhaps, the standout and most talked-about work in the show is also one that Moholy-Nagy never realised. Room for the Present (1930) is a 2009 recreation of an unrealised gallery space commissioned by Alexander Dorner for the Landesmuseum in Hanover, Germany. The room, filled with sloping walls and chrome display cases, houses films, slides and architectural models.

The star of the room is Moholy-Nagy’s own kinetic light sculpture, Light Prop for an Electric Stage (1930). (The original work is too fragile to travel; the Guggenheim is showing a 2006 replica.) Through a circular opening of a big black box, you see a sculpture made of motorised discs, screens and rods. It looks like a friendly helper in a Star Wars sequel. As the sculpture rotates, it casts shadows on the back wall of the box. Moholy-Nagy understood that sometimes you need the right container to fully illustrate the magic of what is inside.