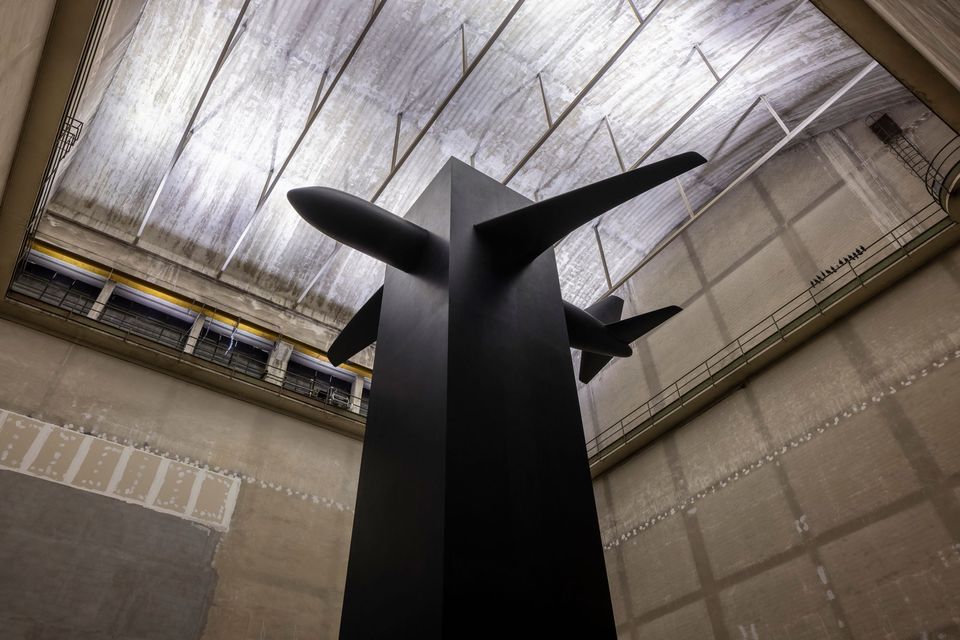 Maurizio Cattelan's new work Blind is a response to the 9/11 terrorist attacks that the artist says he has "been thinking about for years" Photo: Agostino Osio; courtesy the artist, Marian Goodman Gallery and Pirelli HangarBicocca

A towering memorial to the terrorist attacks of 9/11 is the climax of the “dramaturgy in three acts” created by the Italian artist Maurizio Cattelan for a sombre new solo show in Milan. Titled Breath Ghosts Blind, after the three new works it features, the exhibition opens tomorrow at the Pirelli HangarBicocca contemporary art foundation.

Cattelan is best known for the absurd humour of works such as Comedian (2019), the banana duct-taped to a wall and sold for $120,000 (in an edition of three) at Art Basel Miami Beach, and America (2016), a fully functioning solid gold toilet (that was stolen in 2019). In apparent contrast, Breath Ghosts Blind presents the artist’s preoccupation with “existential questions that affect us all, the cycle of life from birth to death”, according to Roberta Tenconi, the co-curator of the show with HangarBicocca’s artistic director Vicente Todolí.

Cattelan’s first exhibition in his home country since he announced his retirement from art in 2011 has been conceived especially for the cavernous industrial spaces of the HangarBicocca, a former factory. Visitors first encounter Breath, which depicts a man lying in a foetal position beside a dog, evoking birth and vulnerability. 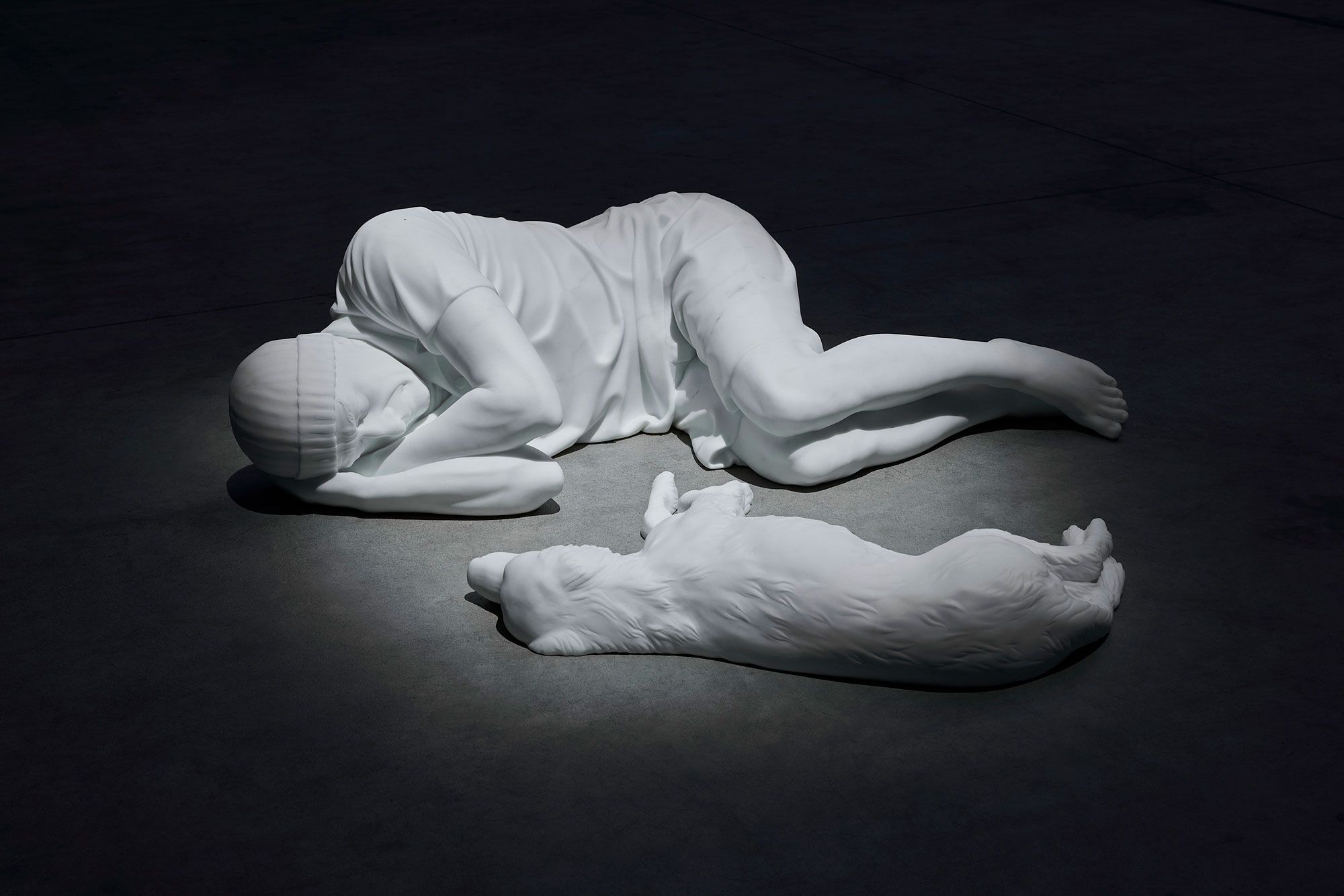 Next on the journey is Ghosts, a new version of Cattelan’s assembly of taxidermy pigeons, previously displayed at the Venice Biennale under the titles Tourists in 1997 and Others in 2011. With hundreds of life-like birds perched on the dark beams and trusses of the 30m-high Navate exhibition hall, the work is reminiscent of Alfred Hitchcock’s horror film The Birds and suggests ideas of social surveillance. 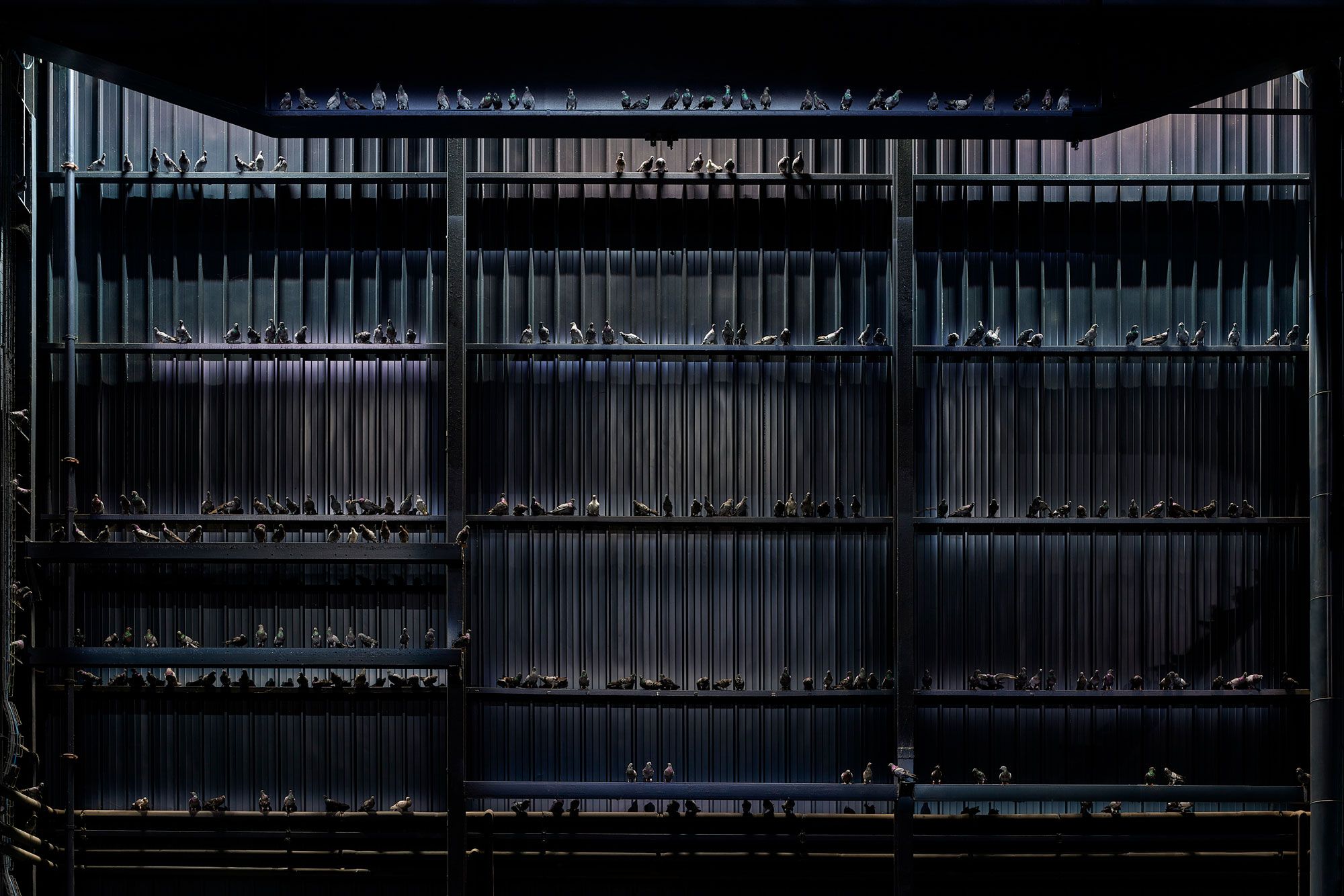 The show culminates with Blind, a black resin tower cut through with the form of an airplane—Cattelan’s response to the 9/11 terror attacks on the World Trade Center in New York 20 years ago. Although the work was only produced this year for HangarBicocca, it is “something I’ve been thinking about for years”, Cattelan reveals in an interview with the curators in the exhibition catalogue, published by Marsilio Editori.

A longtime resident of New York, the artist witnessed the tragedy at first hand. “I was in New York on 9/11, and getting ready to board a plane. I had to walk home from LaGuardia, which took hours, and the things I saw stayed with me,” Cattelan recalls. “Those scenes were terrible, apocalyptic, and I still carry the memory of that tragic event which revealed the full fragility of the human condition.” 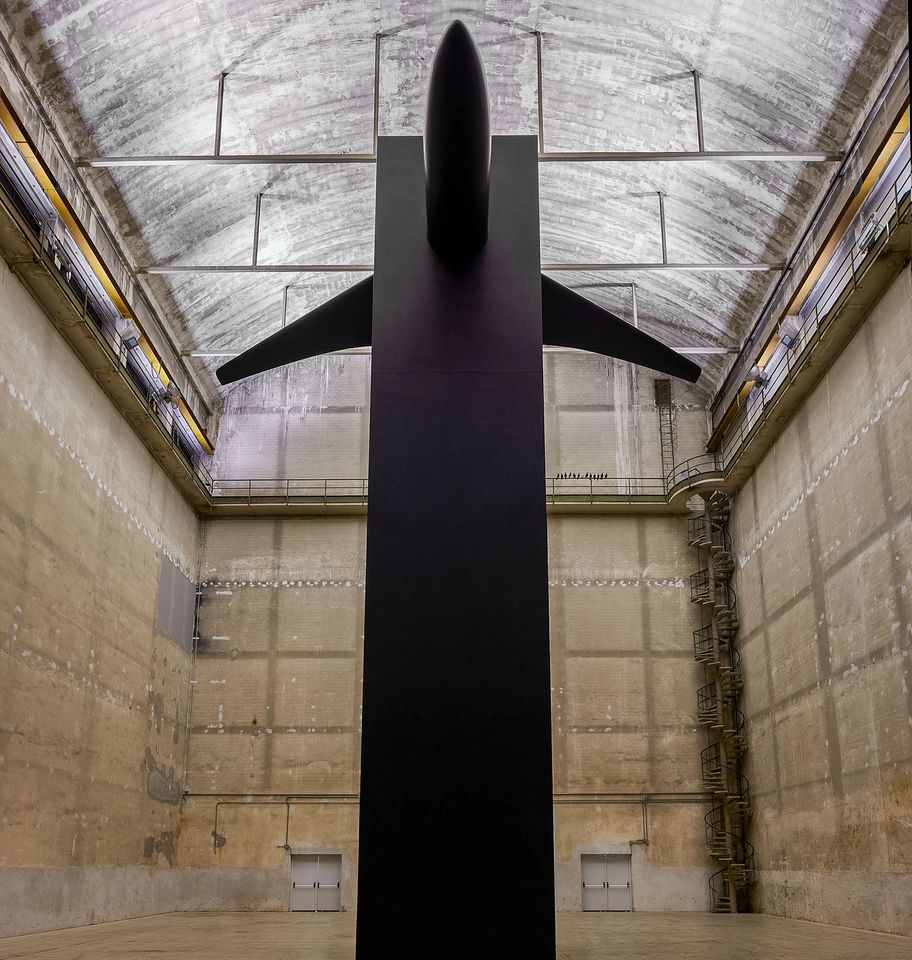 In 2017, Cattelan discussed the idea of a monumental work to commemorate 9/11 with the then chief curator of New York’s Solomon R. Guggenheim Museum, Nancy Spector, she writes in an essay for the HangarBicocca catalogue. She was “hesitant at best”, she says, because the “notion of visually manifesting the trauma of 9/11 seemed too emotionally fraught, maybe even toxic, particularly in New York City only 16 years after the attacks. No stranger to controversy, Cattelan comprehended the risks of such a work, but knew intuitively that he needed to realise it one day under the right circumstances.”

In the catalogue interview with Todolí and Tenconi, the artist describes Blind as “a work about pain and its social dimension, it is there to show the fragility of a society where loneliness and egotism are on the rise”. He also links its meaning to the Covid-19 pandemic, that has “made death visible again in our lives”.

Asked about the decision to display a work inspired by 9/11 for the first time in Italy, Cattelan says: “Certain images (and objects) have an incredible symbolic power; they are so charged that they take on a broader meaning and become evocative of many things, not just that event. And so achieving a certain distance, not just in space but in time, becomes a necessary step in order to remember.”