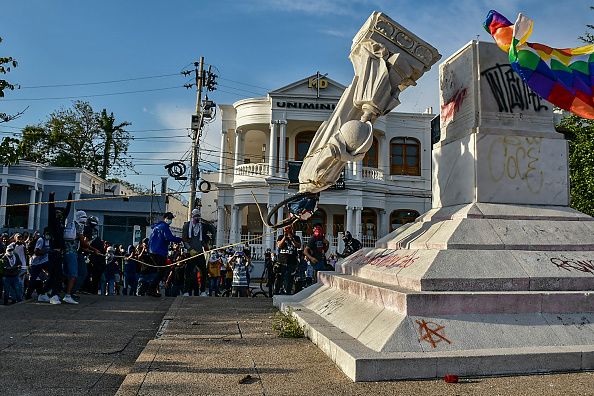 Protestors topple a statue of Christopher Columbus during a demonstration against the government in Barranquilla, Colombia on 28 June 2021 Photo: Mery Grandos Herrera/AFP via Getty Images

Several monuments and memorials valorising European colonialism have been vandalised or toppled in Colombia—including a statue of the Italian navigator Christopher Columbus—amid nationwide protests. The demonstration started around two months ago, sparked in part by escalating rates of violence and poverty in the country, with activists demanding social and economic reform from the administration of Colombian president Iván Duque Márquez.

Several statues of Spanish conquistadors, like Sebastián de Belalcázar and Gonzalo Jiménez de Quesada, have been toppled in cities including Bogotá, Popayán and Cali. Last month, a statue in Bogotá of the Spanish queen Isabella of Castile, who sponsored Christopher Columbus on his west-bound voyage, was removed by city officials after it was vandalised during a violent clash between riot police and protestors. And this week, protestors tore down the statue of Columbus in a town square in Barranquilla.

Indigenous groups like the Misak, Nasa and Pijao have been at the forefront of the protests, saying that these public statues glorify colonialism, which resulted in genocide, enslavement and the loss of their ancestral land.

The Colombian ministry of culture says it will form a committee led by the national heritage council to review monuments installed in the country since 1920. The culture minister, Angélica Mayolo, says Colombia must “respect different viewpoints and listen to Indigenous communities who today feel discriminated against by symbols of national heritage, but without condoning violence and destruction”.

Protests calling for the removal of contested statues reached a fever pitch in the US last year following the murder of George Floyd and other Black Americans, and later became a worldwide movement. More than 200 memorials to slave owners and those involved in the mistreatment of Indigenous tribes were toppled or removed in the US since June last year, and some were relocated to museum collections.