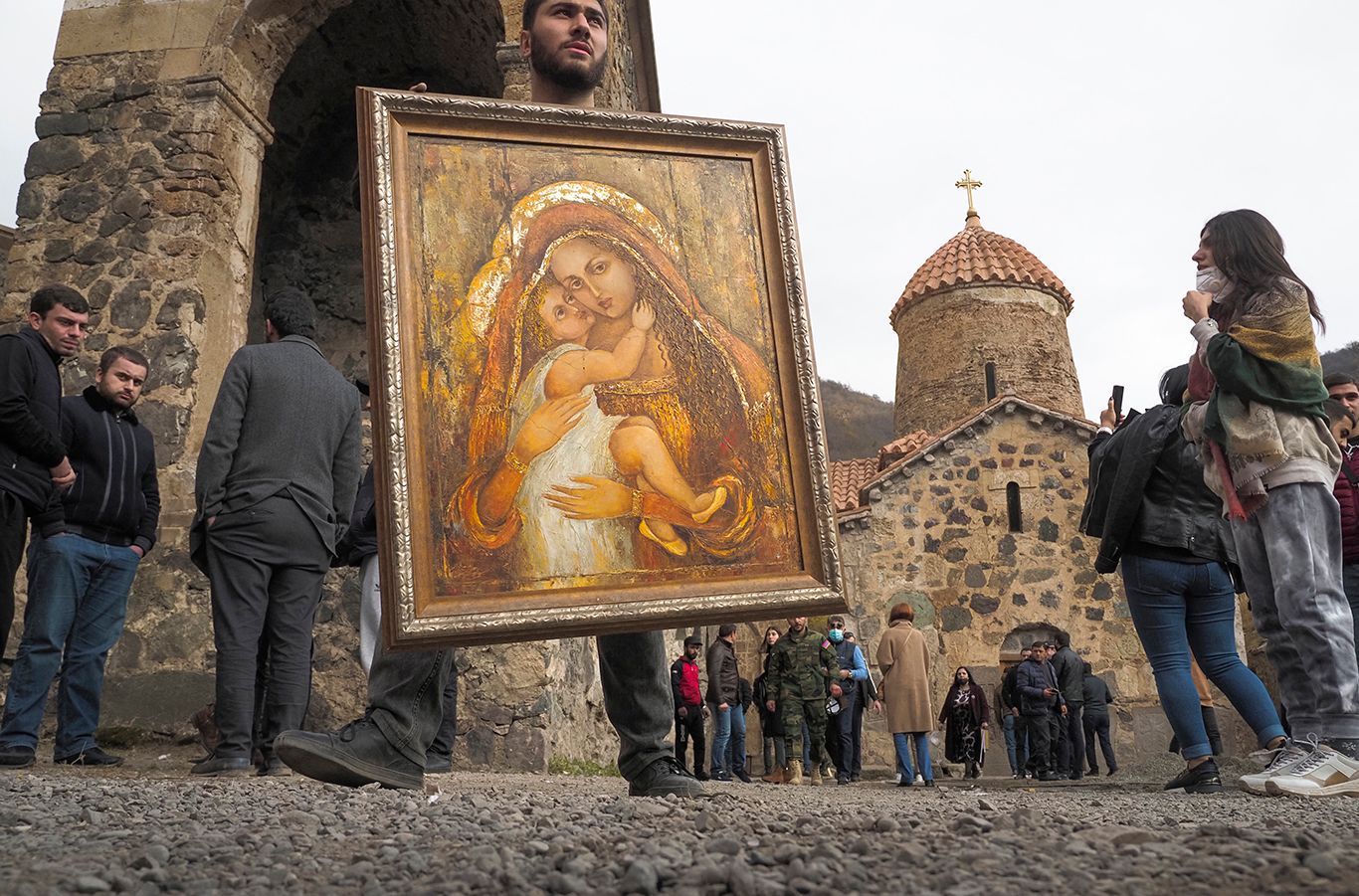 A man held an icon from the Dadivank, an Armenian Apostolic Church monastery dating to the ninth century in the district of Kalbajar, as ethnic Armenians prepared to leave on 14 November. The district is being turned over to Azerbaijan as part of a Russian-brokered peace accord to end six weeks of fighting in Nagorno-Karabakh. Associated Press

The Metropolitan Museum of Art in New York issued a plea today for the preservation of cultural heritage sites in the Nagorno-Karabakh region as Azerbaijan moves to take control of swaths of territory under a Russian-brokered peace deal for the enclave.

"The recent bloodshed and destruction in the Nagorno-Karabakh region is a global tragedy of grave concern to us all,” the Met’s president and chief executive, Daniel Weiss, and director, Max Hollein, said in a statement. “In addition to our plea and hope for the violence to stop, as museum leaders we urge that cultural heritage sites be protected.”

Nagorno-Karabakh lies within the borders of Azerbaijan but contains an Armenian ethnic majority.

The Russian peace deal ended a six-week war between Azerbaijan and Armenians that is thought to have killed thousands. The war has pulled in some of the region’s biggest players, with Turkey backing Azerbaijan and Russia seeking to stop the fighting in a region it once governed.

In October, Armenia accused Azerbaijan of bombing and desecrating the main cathedral in the city of Shushi (called Shusha by Azerbaijanis) and endangering an ancient Hellenistic Armenian city, Tigranakert. Azerbaijan has denied attacking the Ghazanchetsots Cathedral and has accused Armenia of destroying dozens of mosques when it controlled the region. Armenia is one of the world’s oldest Christian civilisations and Azerbaijan is mostly Muslim.

Azerbaijan’s capture of Shushi early this month was a turning point that paved the way for the Russian-brokered resolution ceding districts to Azerbaijan.

“The Metropolitan Museum of Art is dedicated to preserving and exhibiting human creativity of over 5,000 years from across the globe,” Weiss and Hollein say. “As the organiser and host of the Armenia! exhibition in 2018—which was the first major exhibition to explore the remarkable artistic and cultural achievements of the Armenian people in a global context over fourteen centuries—we have watched in horror and sadness at the recent violence and bloodshed in the Nagorno-Karabakh region.”

Armenia and Azerbaijan, former Soviet republics, have been clashing over territory since the Soviet Union collapsed. The latest fighting over Nagorno-Karabakh, or the Republic of Artsakh, as it is called by Armenians, began in September when President Ilham Aliyev of Azerbaijan opened an offensive to retake the enclave by force.

Under the terms of the peace agreement, control over the enclave’s main city, Stepanakert, will stay with ethnic Armenians as they cede other land to Azerbaijan that it has taken during the fighting. Ethnic Armenians are withdrawing from some areas they have governed since a previous peace deal brokered in 1994. Russian troops are now patrolling a corridor of land that links the region with Armenia so that Armenians can safely leave the area.

The preservation of both churches and mosques in Nagorno-Karabakh will be a main focus of the peace deal, Russian Foreign Minister Sergey Lavrov said recently.

Lavrov said that engaging “UN organisations such as, first and foremost, Unesco”, the United Nations arm that oversees cultural monuments, is a priority “especially with regard to the establishment of peaceful life in Karabakh: the coexistence of ethno-confessional groups, the revival of cultural and religious sites, ensuring their safe and respectful functioning.”

Each side in the conflict has appealed to Unesco. Azerbaijan’s Culture Ministry has said that it is resuming a decades-old drive to inscribe the Shusha historical and architectural reserve, including hundreds of ancient buildings, 17 mosques and the Shusha Fortress, on the Unesco World Heritage List. It has been on the tentative list since 2001.

Update: After meeting with representatives of Armenia and Azerbaijan on 18 November, the director general of Unesco, Audrey Azoulay, proposed that the UN agency carry out a preliminary field mission to draw up an inventory of the most significant cultural monuments “as a prerequisite for effective protection of the region's heritage.”.

The World Council of Churches has expressed solidarity with the Armenian church over “reports being received of other more recent desecrations” and urged “Unesco to take all possible and appropriate measures to protect these sites.”