“There isn’t much presence of Middle Eastern contemporary art in America generally and in particular on the West Coast—there’s more happening in New York,” said Aya Mousawi, the show’s creative producer. “But things are changing slowly.”

Come Thursday, the two-storey atrium of Minnesota Street Projects will be filled with an elegantly pointed sculpture by Manal AlDowayan: a cascade of paper-thin golden leaves that honour the ancestors of hundreds of Saudi Arabian women who participated in her project. They recreated their family trees through their matriarchal—and typically suppressed—lineages as far back as possible, writing the names of a female forebear on each leaf. 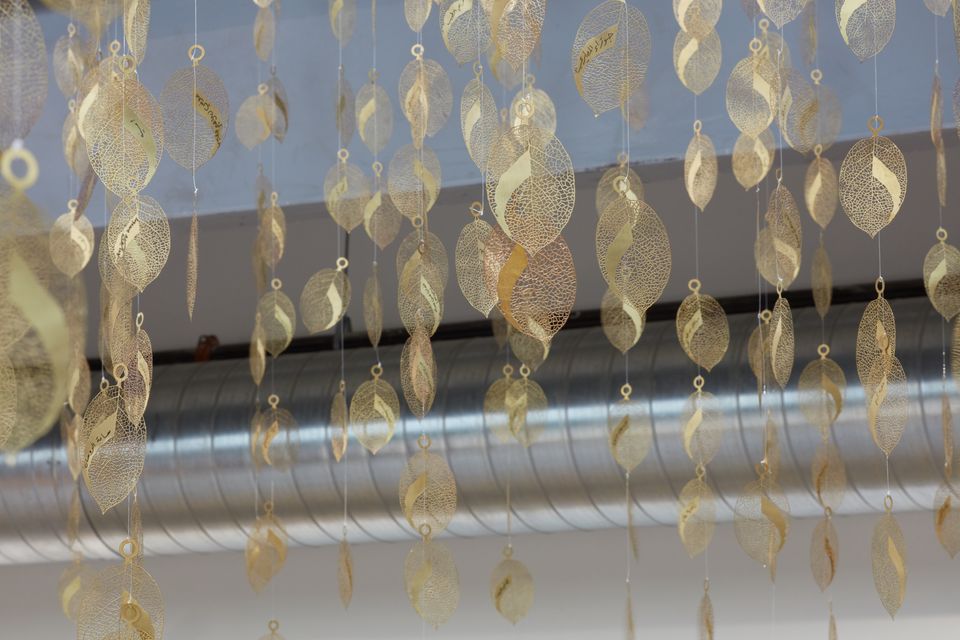 In a gallery downstairs, you will find Elementary 240, a 2016 video by Njoud Alanbari that features young Muslim girls playing cheerfully in front of a pink mural. The scene proves darker when you focus on the mural’s content: eight swooping swords underscore a list of eight things Muslim women are forbidden to do, from taking drugs to listening to music not sanctioned by the government.

The prominent Arabic artist and arts advocate Abdulnasser Gharem, who also helped to spearhead the show, is well represented with several works, including The Path from 2007, a video that shows a bridge outside the city of Khamis Mushait covered end to end with repetitions of the word “sirat” (the path). The work is a way of calling attention to the double disaster that occurred there: first when the bridge collapsed under the weight of people trying to escape a flood, killing many, and again when nobody from the press or state investigated the cause.

“Rather than analysing art and society separately, the artists [in this exhibition] confront art as a reflection of society, positioning themselves as its mirrors,” Gharem says. Several of the artists will be on hand for the opening of the exhibition, sponsored by the King Abdulaziz Center for World Culture, a space funded by the giant oil company Aramco, and organised by the London non-profit Culturunners.

The organisers behind this show also lined up projects for some of the same artists in other cities, including Parallel Kingdom at the Station Museum of Contemporary Art in Houston, Texas (until 2 October) and Gonzo Arabia (until 1 September) held in a pop-up space commandeered by the Gonzo Gallery in Aspen, Colorado. Next up is Phanton Punch: Contemporary Art from Saudi Arabia (28 October–18 March 2017) at Bates College Museum of Art in Lewiston, Maine.