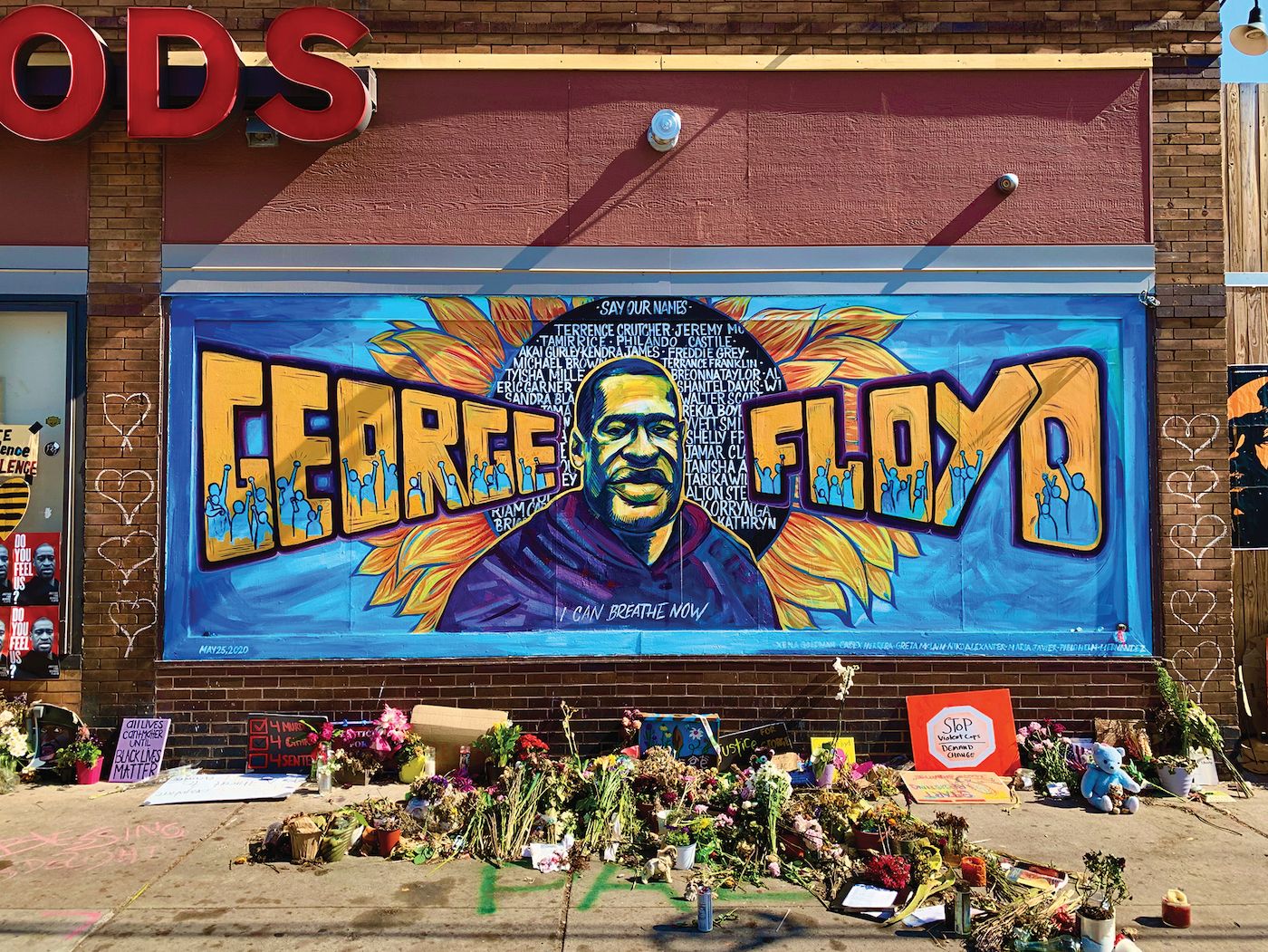 Mural artist Greta McLain, who is white, apologised for taking up “a space of mourning that wasn’t mine” © Jéan Béller on Unsplash

George Floyd’s death from police violence has prompted an urgent reckoning about how racism plays out in American society—from the justice system to social services to healthcare and even the arts. In the wake of the protests and unrest that erupted in Minneapolis following the death of Floyd, many organisations and artists offered their support and services to the Black Lives Matter movement, through mutual aid programmes and mural paintings on damaged businesses. What has often been missing, however, is sustained engagement with black communities in a meaningful way, local arts leaders say.

One example came out of the mural created as a memorial to Floyd at the Cup Foods convenience store where he was killed, which became one of the most visible public art works in the city. There was a backlash against the artists who painted the mural, who are white and Latinx, for taking on such a prominent project without input from the community. “The mural was created, not by black folks and without the process of engaging black people,” said Keno Evol, the executive director of Black Table Arts. “It just brings to light the ways in which, in the framework of social justice advocacy, black folks are still being left out.” One of the artists, Greta McLain, issued a public apology on Instagram, saying: “By jumping into such a public and central action, I, as a white person, centred myself in a space of mourning that wasn’t mine to be at the centre of. I messed up, I caused harm, and I benefited from this centring in a way that should have gone to a black artist.”

Murals in general have proliferated for weeks around Minneapolis, but the way resources have been allocated for these projects also highlights ongoing disparities. “Uptown is beautifully painted because it’s easy and visible,” says Tricia Heuring, the co-founder of the nonprofit arts organisation Public Functionary, referring to the prosperous, mostly white Minneapolis neighbourhood. Fewer murals can be found on the boarded-up storefronts on East Lake Street further south in the city, where much of the rioting and fire damage took place, or at the many black-owned businesses in north Minneapolis that were damaged. “It’s hard not to question intent and see how inequalities persist,” Heuring says

The Uptown Association coordinated the murals in that neighbourhood, and Heuring also noted the lack of diversity at the annual Uptown Art Fair, run by the group. The organisers have not done enough “to think about why there’s not a good number of BIPOC [Black, Indigenous and People of Colour] artists showing, when $1.7m in art sales happens every year at that fair,” she says.

Jill Osiecki, the interim director of the Uptown Association, acknowledges a lack of representation at the fair and says, “It is not easy for a lot of artists to be included in an event like this,” citing numerous barriers like the jury process, and application and booth fees. She adds, “I’ve been battling this for a little bit, and in the last several weeks I’m realising it is a time for change.” Although the art fair is cancelled this year, the organisation is now reaching out to artists of colour about opportunities throughout the summer, Osiecki says.

Inequalities are also seen in the resources available to black arts organisations. DeAnna Cummings, a co-founder of Juxtaposition Arts (JXTA), a youth-centred space in north Minneapolis, who recently was named the programme director of arts at the McKnight Foundation, says “2% of all cultural institutions receive nearly 60% of all contributed revenue,” according to a study by the cultural research and consultation company Helicon. “Of those, only a small percentage are black- or POC-led institutions.”

And if they cannot secure funding, many such spaces miss out on opportunities. For example, while a number of architecture groups might come forward when development or public art projects are made available in North Minneapolis, “a larger firm can say, ‘We’ll do whatever design work for free, we just want to be able to help and work on the project,’” says Roger Cummings, the chief cultural producer at JXTA. “POC-led firms don’t have that luxury; they have to pay their staff.”

Esther Callahan, the co-director of artistic programmes at the Emerging Curators Institute, says that at smaller organisations, there is also the danger of burnout among staff members of colour, especially during a crisis. “This push to have everything be a sprint becomes even more taxing,” Callahan says. “There is a common practice of, ‘If you don’t get this [funding] now, you’ll never get it again.’”

Still, DeAnna Cummings sees room for hope. “This space has opened up in the past [few] weeks for us to be really bold in stating: ‘These are the problems, and these are the ways in which cultural institutions are replicating anti-blackness and racism,” Cummings says. And she believes the conversations happening in Minneapolis can be an example for the larger art world to follow. “If there’s anywhere in the country that has the ability to make the kind of big and deep change we need, I think it’s us.”