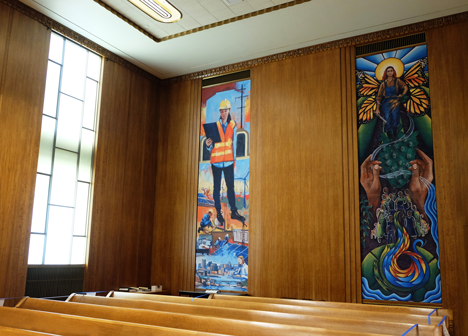 West side view of the murals in St. Paul's city council chambers. Courtesy of Ramsey County

A Depression-era mural showing the subjugation of Indigenous people and labourers under towering white men in the city hall council chambers of St. Paul, Minnesota, has been concealed with four new artworks. Unveiled last week, the works aim to reflect a more inclusive worldview that foregrounds black, Indigenous and people of colour (BIPOC) citizens. Yet some feel that the murals fall short of their modernising mission.

The original four-panel mural was produced by the well-known Chicago artist John Warner Norton in 1931 and depicts scenes some claimed valorised white supremacy and imperialist beliefs, one of which included Indigenous people being baptised by a Catholic priest. The four new canvases aim to “reimagine themes represented in the original murals in a way that more accurately represents and includes the contributions of women and diverse communities”, according to the open call for submissions published in September.

Selected earlier this year, the winning works range from images that symbolise the contributions of immigrants to the US to pieces referencing the climate crisis, such as a Latina farmworker with monarch butterfly wings and a female constructor worker installing solar panels. The artists behind them include Adam Swanson, Leah Yellowbird, Emily Donovan and more than a dozen artists of the Latinx Mural Apprenticeship Project. Each were paid $3,000 for their work.

Yet Crystal Norcross, the board chair of the Minnesota-based Indigenous arts and social justice organisation Oyate Hotanin, says that the new murals are a “low-budget, Band-Aid project”.

Norcross tells The Art Newspaper that council members should have “taken more steps to involve tribal leaders in the initiative”, as St. Paul occupies ancestral Dakota land. In the lead up to the works’ installation, members of the Dakota tribes in the state claimed they were unfairly excluded from the project after their calls for the murals to be “removed, not covered up” after they were brought to their attention amid protests in city hall against the Dakota Access Pipeline at Standing Rock in 2017.

Jim McDonough, the Ramsey County commissioner, and other city council members formed a task force to address concerns around the mural last year after Dakota leaders contacted officials calling for the removal of the mural. However, the Oyate Hotanin and other Dakota tribal members invited to participate in the forum refused to do so after council members suggested placing other works next to the murals, as a side-by-side project.

Norcross says their decision to not participate in the forum “doesn’t take away from the fact that [the council] didn’t acknowledge what we wanted to do with these murals, which is on Dakota land”. She also claims the task force created to discuss the murals, which was led by the Ramsey County Historical Society, originally consisted of 20 members, but during the final decision-making there were just seven members, including two Indigenous participants who said they felt their opinions were not being valued, and that they were being tokenised.

Yellowbird, a member of the Anishinaabe tribe and the only Indigenous artist to be included in the project, created a painting of an Indigenous floral pattern based on traditional Anishinaabe designs.

During the public unveiling of the new works on 19 August, McDonough asked: “What do you do with art, monuments, statues, all these things that are in our community that aren’t necessarily reflective of our values anymore? How do you manage to do that and do it in a way that allows us to move forward?” He did not respond to a request for further comment on the dispute.

The city plans to rotate the works every six to twelve months, and Norcross says Dakota tribe members hope that the next instalment will be more inclusive of Dakota artists. “We have nothing against the Native American artist who participated in the project,” she adds. “The follow-through is the issue; all these commissioners knew how to get a hold of me and other tribal members and didn’t even try.”