It’s hard to find a single person in the Palm Springs art and design community who supports the city’s decision to install an enormous, voluptuous sculpture of Marilyn Monroe, showing her skirt flying up and underwear exposed, on a public site right next to the Palm Springs Art Museum. And several dozens of those dismayed by the sculpture, its pending placement or both gathered today near the California museum to protest.

“This artwork is misogyny in the guise of nostalgia,” says Elizabeth Armstrong, who was the museum’s director from 2014 to 2018 and was among those who spoke at the rally.” It’s an out-of-date fantasy or delusion of a few men who remember the good old days in Hollywood–those were not good days for women.”

She described the protest as energetic despite the 95-degree heat. Some protestors carried signs that said “Marilyn Anywhere But Here” or “Some Like It Not!” Others wore pink T-shirts saying #metoomarilyn, a hashtag generated by the Los Angeles Times art critic Christopher Knight in one of his most excoriating take-downs of a work of art in some 40 years of covering the field. The actual title of the 26-ft-tall, 15-ton sculpture by the kitsch king John Seward Johnson II is Forever Marilyn.

Armstrong calls the siting of the artwork particularly offensive, as it exposes the view of Marilyn Monroe’s backside and is the “opposite of anything the museum stands for.” The museum’s most recent director, Louis Grachos, also publicly denounced the placement of the sculpture. 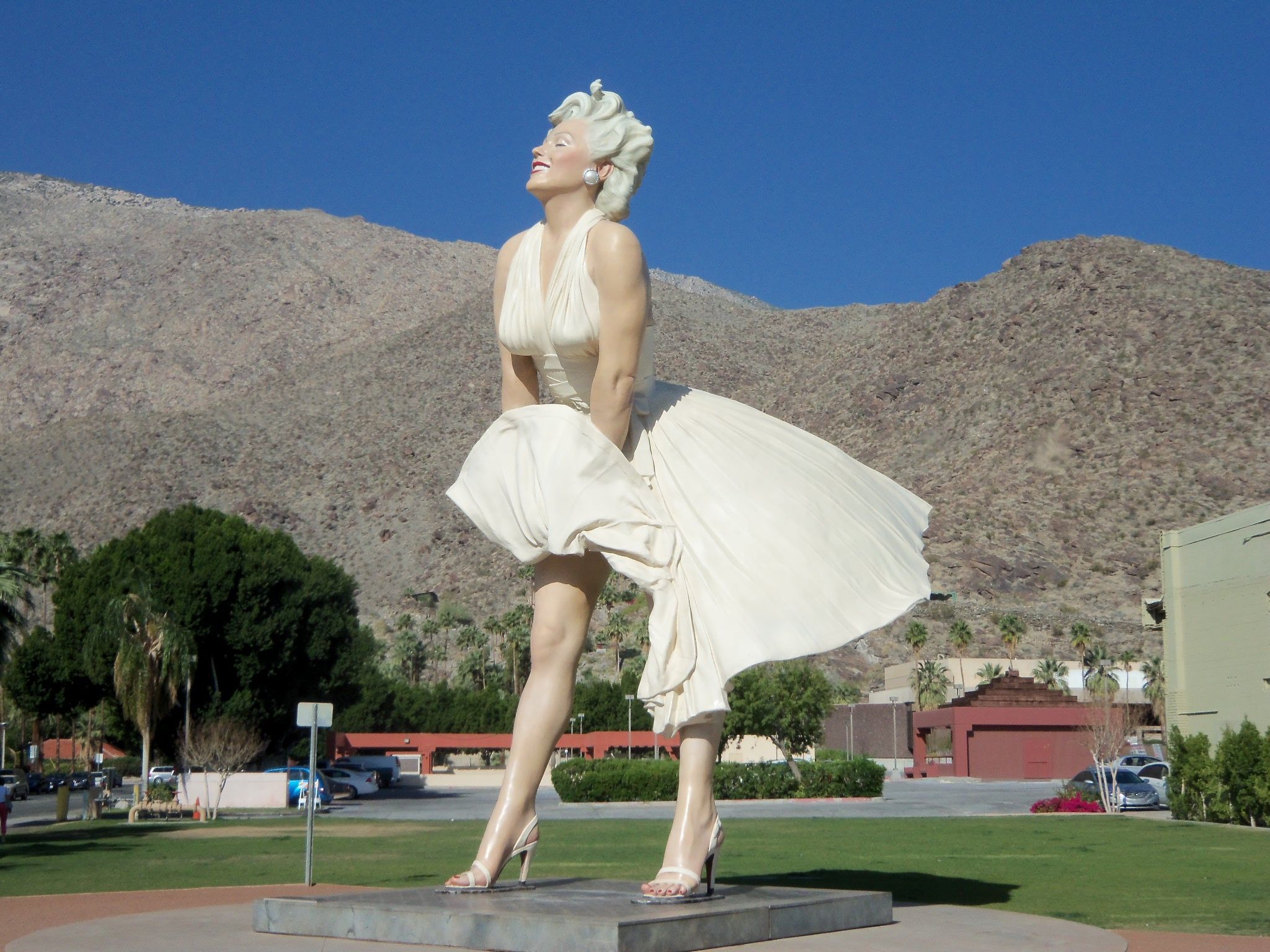 In November the city council approved plans to install the sculpture, which was purchased last year for $1m by a city-funded tourism group called P.S. Resorts, in this museum-adjacent site. Previously the sculpture had been located downtown and became a popular photo op, which led to the idea that it could boost the local tourism industry.

But the public backlash has been fast and fierce. “As an artwork, this is derivative, tone-deaf, in poor taste and exhibits only the deficit of cultural and art literacy of those involved erecting this monument to misogyny,” commented the Los Angeles artist Nathan Coutts on a change.org petition to “stop” the statue that currently has 35,950 signatures. “If it must be displayed, move it down the road with the concrete dinosaurs near Cabazon, where it can exist as the campy roadside attraction it excels at being.”

The petition and protest both were organised by a group called Crema, the Committee to Relocate Marilyn, founded by fashion designer Trina Turk and Modernism connoisseur Chris Menrad. The group also started a GoFundMe page that has so far raised over $67,000 to help cover fees as it pursues legal actions against the city. It recently filed an injunction to stop the city’s plans, which a Palm Springs judge denied.

The Crema team says it is still pursing legal options by appealing the denial of the preliminary injunction to a higher court. “We are trying to keep the process going to keep pressure on the city and P.S. Resorts,” says Menrad. “We are not dropping this in the courts, or in the court of public opinion.”