MoMA responds to Trump’s immigration ban through its collection

The Museum of Modern Art (MoMA) in New York has taken a very public stand against President Trump’s executive order on immigration—all without releasing a formal statement or sending a tweet. On Thursday night, curators reinstalled the museum’s fifth-floor permanent collection galleries with works by artists from the majority-Muslim nations whose citizens have been affected by the immigration ban.

Paintings by Picasso, Matisse and Picabia were replaced with works by the Iraqi-born architect Zaha Hadid, the Sudanese painter Ibrahim el-Salahi and several Iranian-born artists, including Tala Madani, Parviz Tanavoli and Marcos Grigorian. The museum also installed a sculpture by the Iranian-born artist Siah Armajani in its lobby courtyard. (The news of the rehang was first reported by the New York Times.)

Each new addition to the display is accompanied by a forceful wall label that reads: “This work is by an artist from a nation whose citizens are being denied entry into the United States, according to a presidential executive order issued on Jan. 27, 2017. This is one of several such artworks from the Museum’s collection installed throughout the fifth-floor galleries to affirm the ideals of welcome and freedom as vital to this Museum as they are to the United States.”

Bureaucratic institutions such as MoMA are not known for rapid response and the museum rarely makes dramatic changes to its permanent collection display. But in this case, the staff acted fast. A group of curators—Ann Temkin, Jodi Hauptman and Christophe Cherix—hatched the idea for the installation over the weekend, as more than 100 people were detained at airports across the country and thousands more gathered to protest the ban.

The additions aim to illustrate the history of cross-cultural influence in Modern and contemporary art. "The fifth floor galleries are where some of our most beloved works are," Hauptman says. "We thought it would be especially meaningful to call attention to those connections."

The team installed a work on paper by the Iranian artist Charles Hossein Zenderoudi, for example, in a gallery of works by Henri Matisse. Both artists were inspired by calligraphy and Islamic architecture. "Matisse was so interested in the art of Islam—seeing that work as a young artist was completely transformative for him," Hauptman says. 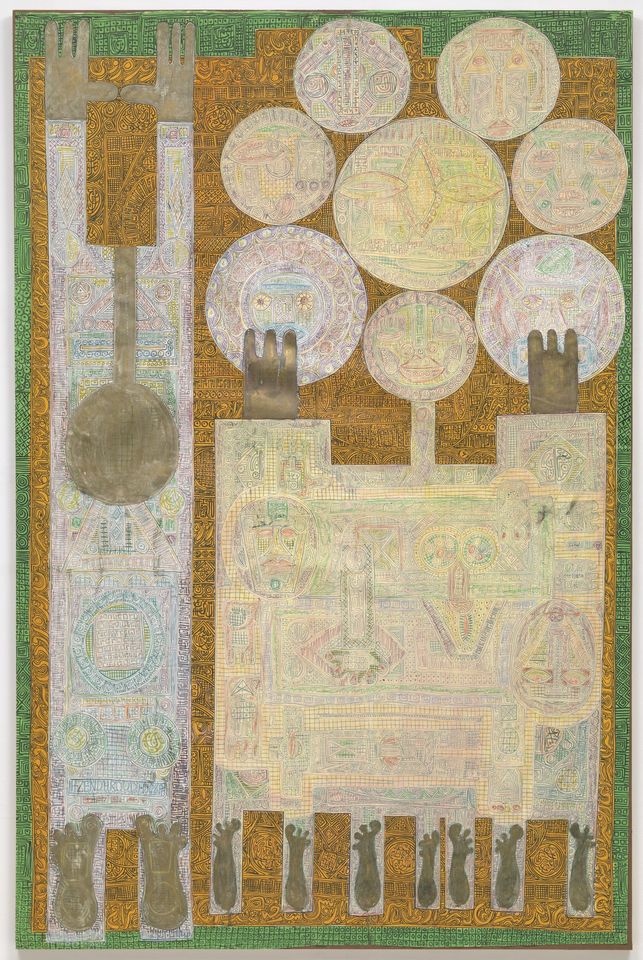 Meanwhile, The Mosque (1964) by El Salahi—one of the most important figures in African Modernism—has been hung alongside works by Picasso and Braque, who looked to African art as they pioneered Cubism in the early 20th century.

The additions were meant as a "gesture of inclusion", Hauptman says. "When you ban travel and communication, what is it that you are going to lose? That's one of the poignant things about seeing the work in the galleries. If there were no opportunity for travel or communication, we wouldn't have these things."

Curators plan to integrate more works by artists from the affected countries in the next two weeks, when several fifth floor galleries are due to reopen after maintenance. Among the works under consideration are photographs by the Iranian-born German artist Shirana Shahbazi and works on paper by the Iranian artist Faramarz Pilaram.

Hauptman says the museum has no scheduled end date for the new display.

UPDATE: The ban was temporarily suspended on Saturday 4 February by a federal judge. The Trump administration has until Monday 6 February to present more arguments to the Court of Appeals.