Contract negotiations continue between the museum and its employees

Around 100 unionised staff members gathered in the rain last night to protest healthcare cuts and salaries outside the Museum of Modern Art’s annual garden party. Protestors included curators, researchers, conservators, registrars, visitor assistants, editors and photographers, who chanted and held aloft placards reading “Modern Art, Ancient Wages” and “Last year: Matisse cut-outs. This year: MoMA healthcare cuts?” Tickets to the fundraising event—where the artists Richard Serra and Kara Walker were honoured, and the centenary of the philanthropist and honorary museum chair David Rockefeller was celebrated—ranged from $225 for entry to the after-party, to $100,000 for a ten-person sponsor table.

“We are protesting for a fair contract,” says Michelle Millar Fisher, a curatorial assistant in the Architecture and Design department. The last agreement ended on 20 May, and MoMA has been in discussions with Local 2110, which represents 286 museum employees who earn an average salary of $49,000. 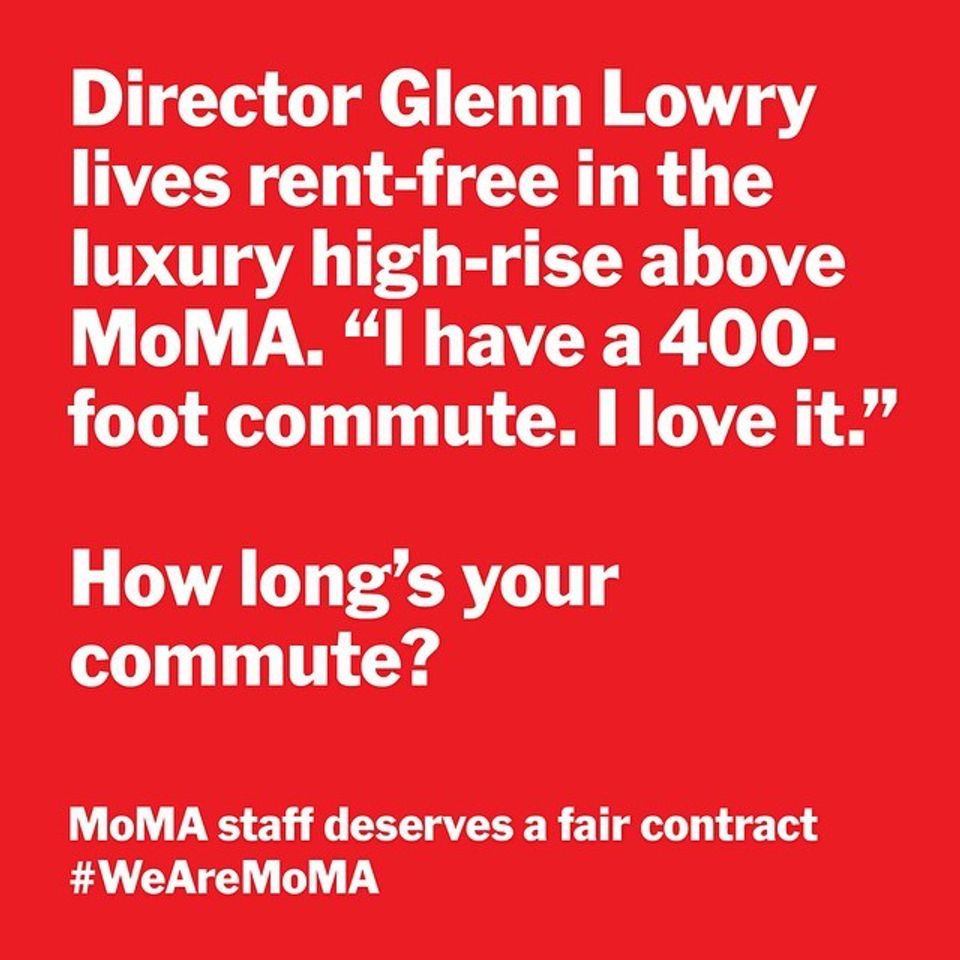 One of the protest signs held by MoMA staff

The museum, which has a $1bn endowment, wants to make several changes to staff’s benefits packages such as lowering the annual pay raise to 1%-2% (instead of the current 3%-3.5%), Millar Fisher says. Museum management also wants to raise the costs of healthcare, add a deductible and establish out-of-pocket limits, which would make employees responsible for up to $5,000 of their own healthcare costs, says MoMA curatorial assistant Luke Baker, who is steward for Local 2110 and a member of its negotiating committee.

For example, the cost of childbirth for a union member would increase from $150 to $2,500, “which is grossly unfair considering 75% of our members are women”, Baker says. Prescription copays would be doubled or tripled for some medications, while a trip to the emergency room would result in “an automatic $2,500 out of pocket expense”, he adds.

“That is why we staged a protest last night—to make our numbers seen and heard,” he says. Forcing staff to “bear the burden of rising healthcare costs is unconscionable at our paygrades, especially while the museum is doing so well financially,” he says.

Because negotiations are on-going, MoMA declined to comment on specifics but said in a statement: “The Museum of Modern Art has an outstanding staff. At this time, we are in the process of negotiations with Local 2110, and are optimistic that we will reach a positive outcome for the staff and all concerned.”

“We are professionals, many with Masters and PhD degrees,” Baker says. “We have student loans and families. We love working for MoMA, one of the best art museums in the world, but at the end of the day, we can’t eat prestige.