Tim Steiner, whose entire back is covered in an ink piece created by Wim Delvoye, will sit in the empty Mona museum until the end of April 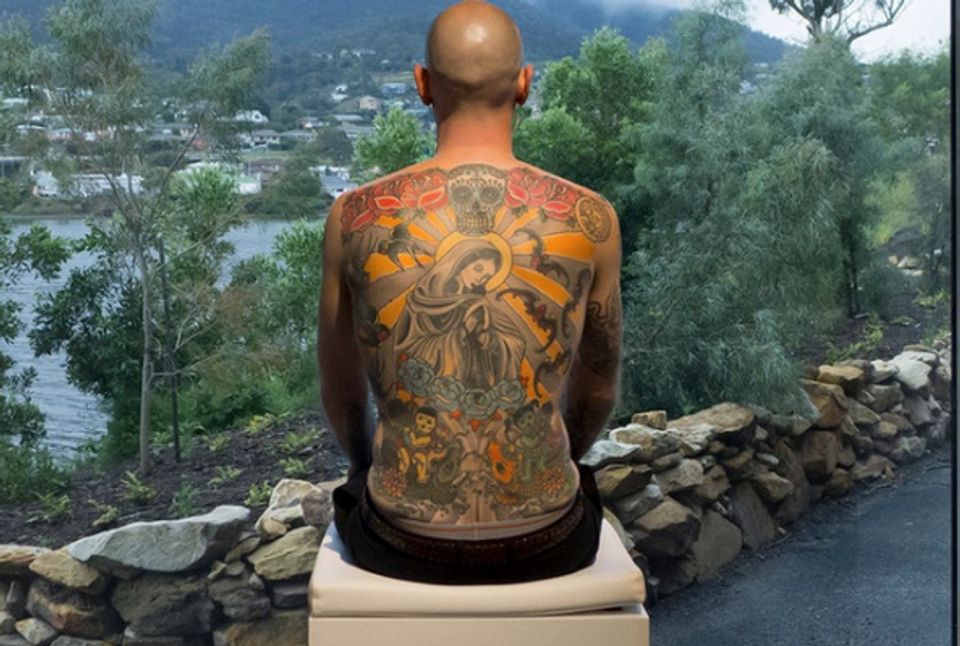 The Belgian artist Wim Delvoye has covered Tim Steiner’s back with a tattoo of the Madonna crowned in a halo, topped with a Mexican skull; the piece is entitled Tim (2006-08) © Wim Delvoye

Although it is currently closed due to the coronavirus (Covid-19) outbreak, The Museum of Old and New Art (Mona) in Hobart, Tasmania, is live streaming a human work of art to laptops and mobiles worldwide. Throughout the coronavirus pandemic, Tim Steiner will sit on a plinth in the empty museum, displaying to online viewers his tattooed back between 10am and 4.30pm (Australian time zone; until 30 April).

In 2007, Steiner met the Belgian artist Wim Delvoye who was looking for a human canvas on which he could ink tattoos. Delvoye covered Steiner’s back with a tattoo of the Madonna crowned in a halo, topped with a Mexican skull; the piece is entitled Tim (2006-08).

In 2008, Steiner’s body tattoo was sold to the German collector Rik Reinking for €150,000 (according to the BBC, Steiner received a third of the sum). When Steiner dies, the skin on his back daubed with the elaborate tattoo will enter Reinking’s collection. “My skin belongs to Reinking,” Steiner said. “My back is the canvas, I am the temporary frame.”

As part of the deal with Reinking, Steiner must show the body tattoo in museums and galleries. Since 2009, he has exhibited his torso in eight venues such as the Kunsthalle in Osnabruck, with previous stints at Mona in 2011 and 2016 (Steiner says he has spent more than 3,500 hours sitting on the plinth at the Tasmanian museum founded in 2011 by collector David Walsh).

“I’m not an artist, this is not performance art. I’m a regular dude from Zurich that sits on a box,” he says in a film screened on Mona’s website, which shows him exercising and meditating every day before the live stream. “I am the first person that is fully aware of how ridiculous this is; I am an adult man that sits on a box for a living… but what I experience… is [something] that nobody in the world can share,” he adds.