Unesco accused of turning a blind eye to destruction of heritage sites, as bitter skirmish between Azerbaijan and Armenia in the disputed territory drags on 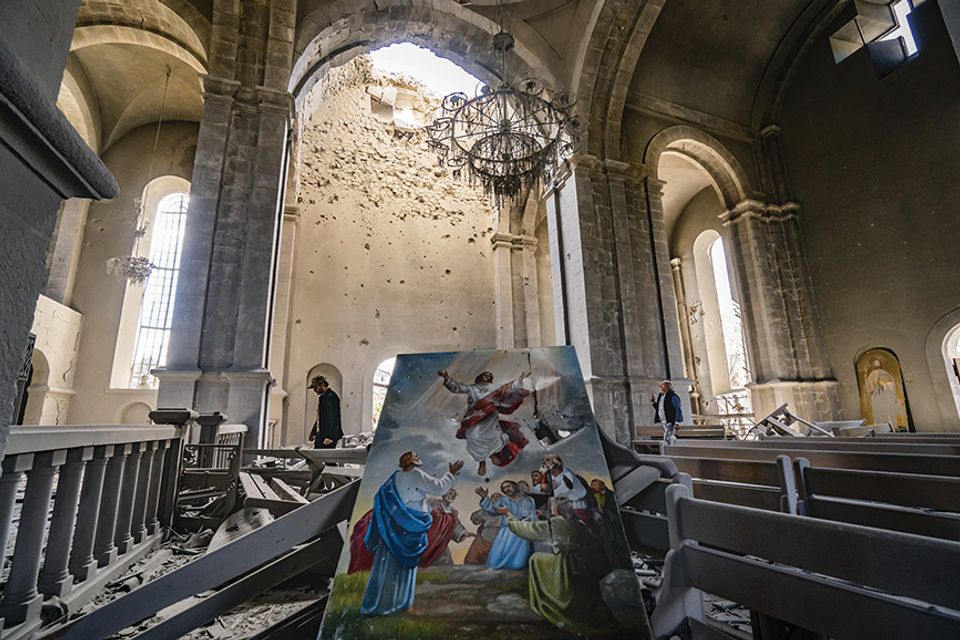 Armenia has accused Azerbaijan military of shelling the Ghazanchetsots Holy Saviour Cathedral in Shushi, one of the largest Armenian churches in the world Photo: Celestino Arce/NurPhoto via Getty Images

Heritage and archaeological sites are under renewed threat as fighting resumes between Armenia and Azerbaijan over the disputed territory of Nagorno-Karabakh. The most recent flare-up comes after a ceasefire appears to have been violated within hours after it was brokered by US authorities yesterday. Two previous ceasefires brokered by Russia also failed to hold.

Since the beginning of the latest dispute on 27 September, hundreds of people have died, and thousands have been displaced in what has been described as the fiercest conflict between the two countries in more than 25 years.

Nagorno-Karabakh, known as the Republic of Artsakh, lies within the borders of Azerbaijan, but contains an Armenian ethnic majority and has been under the control of Armenian troops since 1994. The area is home to numerous monuments of religious and civil importance, memorials and various forms of art, including the remnants of ancient settlements, some of which have now come under attack. 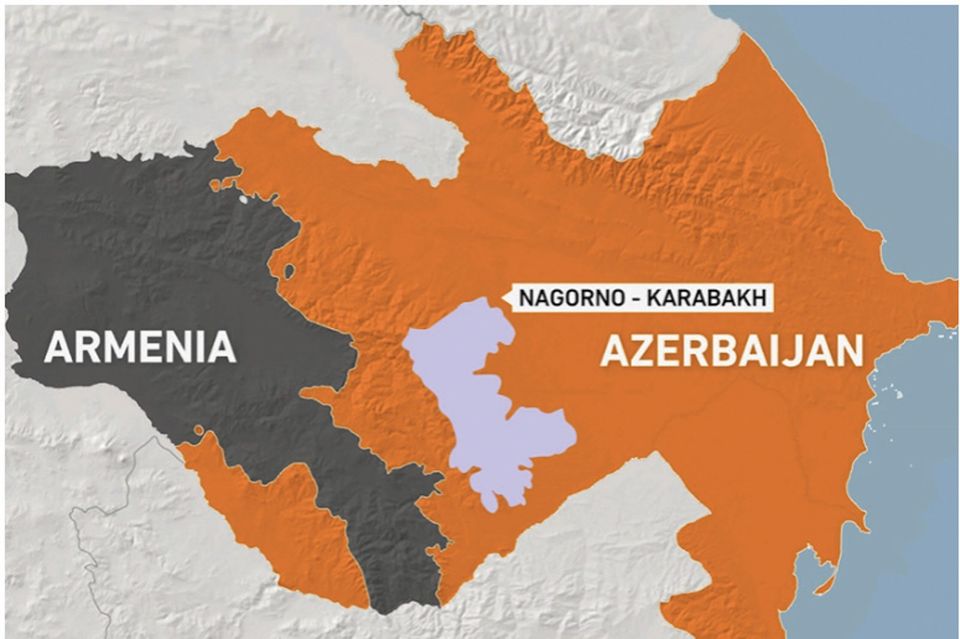 Nagorno-Karabakh lies within Azerbaijan, but has a large Armenian population © Illustration by Katherine Hardy

On 8 October, a spokesman for the Armenian defence ministry said on social media that the Ghazanchetsots Holy Saviour Cathedral in Shushi, one of the largest Armenian churches in the world, was shelled by Azerbaijan. He posted pictures of broken pews, a large hole in the ceiling and rubble scattered across the 19th-century building. Azerbaijan quickly denied bombing the cathedral. A defence ministry spokesperson said that, “the information about the damage to the church in Shushi has nothing to do with the activities of the Azerbaijani army.” Azerbaijani forces “do not target historic, cultural and especially religious buildings and monuments”, he added.

Meanwhile, according to a 3 October report by the archaeologist Hamlet Petrosyan, the 2,000-year-old Hellenistic Armenian city of Tigranakert was also struck by Azerbaijani artillery. “The best-preserved city of the Hellenistic and Armenian civilisations” of the Caucasus “is in the area of intensive war activity,” Petrosyan’s team said in a statement, noting that it had been “shelled several times”. Neither Armenia nor Azerbaijan have released information about the site.

In Azerbaijan, museums have publicly supported the war effort. On 7 October the National Art Museum and the National Carpet Museum, both in the capital of Baku, announced they would be making a donation to the Azerbaijani armed forces. “The glorious sons and daughters of the homeland gathering all their strength on the front line and at the rear are ready to fight against the enemy on the battlefield for the liberation of the occupied lands of Azerbaijan and the restoration of the territorial integrity of the country, as is our civic duty,” the National Art Museum of Azerbaijan said in a press statement announcing its donation of 3,000 manat ($1,800).

According to Simon Maghakyan, an Armenian political scientist now based in Denver, Colorado, Azerbaijan has been deliberately shelling sacred sites to wipe out evidence of an Armenian Christian past and thus any territorial claims. Azerbaijan denies the charge.

Now, Maghakyan says, “it is fair to say that all 4,000 cultural heritage sites of Nagorno-Karabakh are in danger of severe damage”, including the historic town of Amaras and its fifth-century Mausoleum of Saint Grigoris; and the 13th-century monastery at Dadivank, which was established as a chapel in the first century.

On 9 October, Armenia’s minister of culture, Arayik Harutyunyan, appealed to Unesco to condemn the bombing of Ghazanchetsots Cathedral. “The deliberate destruction of cultural heritage constitutes a war crime. Targeting cultural heritage sites, especially in war situations, is strictly prohibited by a number of international conventions, including the Unesco Hague Convention. Unfortunately, when Azerbaijan erased the entire Armenian cultural heritage of Nakhichevan between 1997 and 2006, it didn’t receive appropriate condemnation from Unesco. That silence resulted in the erasure of 89 medieval churches, 5,840 khachkars and 22,000 tombstones.”

He added: “We call upon Unesco and all other relevant organisations to urgently and unequivocally condemn Azerbaijan’s continuous aggression and targeting of cultural heritage sites and other cultural and civilian infrastructures. We are convinced that the timely actions by Unesco and other world-leading organisations will stop the further destruction of cultural monuments and civilian infrastructures in Artsakh.” 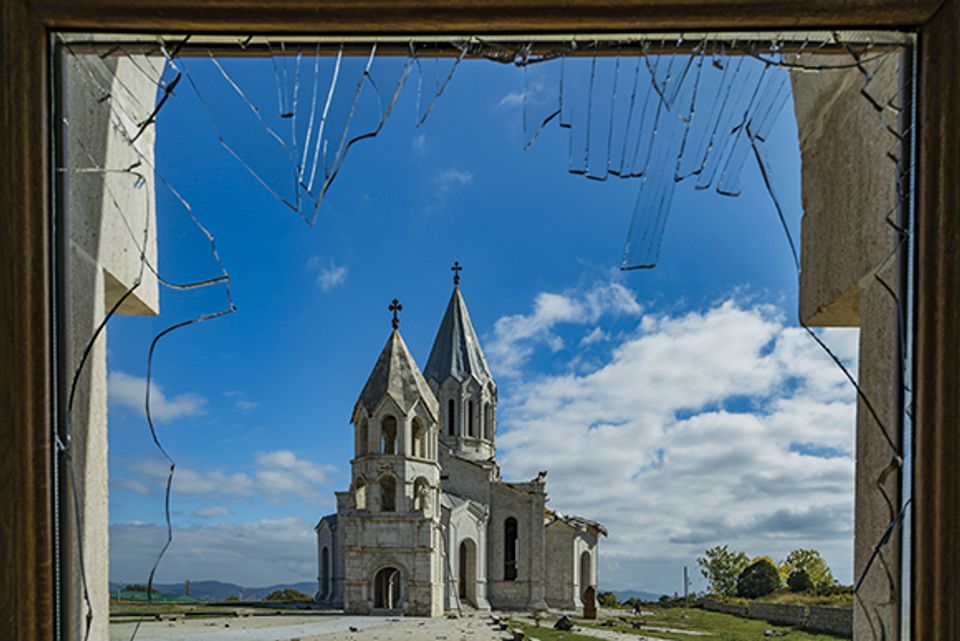 View from a broken window of a building near the Shushi cathedral, Ghazanchetsots Cathedral, after Azerbaijan shelling that destroyed part of roof in a double attack on October 11, 2020 (Photo by Celestino Arce/NurPhoto)

The same day, Unesco posted a statement on its website condemning the recent violence on both sides, stating: “Unesco expresses its grave concern with the continuing escalation of violence in the Nagorno-Karabakh conflict zone, which is causing rising civilian casualties and inflicting damage on civilian infrastructure, including on schools, cultural and religious sites, and also affecting the safety of journalists.”

Maghakyan accuses Unesco of turning a blind eye to the destruction, saying it has been “complicitly silent toward Azerbaijan’s acts of cultural genocide.” He believes Unesco has been slow to react for two reasons: Azerbaijan’s financial contributions to the cash-strapped institution (Azerbaijan donated $5m to Unesco after the US pulled its funding in 2013), and its links to two former directors general, Koichiro Matsuura and Irina Bokova.

In 2017, the Guardian revealed that Bokova’s husband, Kalin Mitrev, accepted a consulting fee of at least €425,000 ($500,000) linked to a public relations company that funnelled an estimated $3bn into various influential groups and individuals to promote the Azerbaijani government on the international stage. Bokova could not be reached for comment, but in 2017 Mitrev told the Guardian that the payments were for legitimate business consultancy. He denied all knowledge of the conduit used to execute them or the original source of the funds.

Meanwhile, Matsuura served as a trustee on the state-supported Baku International Multiculturalism Centre and was awarded a diplomatic service medal from the country in July this year. Matsuura could not be reached for comment.

Unesco declined to comment on these allegations, referring us to its statement condemning the violence.

Following the recent escalation of hostilities, a group of prominent intellectuals and scholars including Noam Chomsky, Gayatri Chakravorty Spivak, Tariq Ali, Viken Berberian, Judith Herman and the philosophers Cornel West and Seyla Benhabib published an open letter in the Los Angeles Review of Books on 16 October calling for a ceasefire “to end the bloodshed and human and cultural carnage” in Nagorno-Karabakh. “We remind you that the site of the bombing includes archaeological sites such as the ancient Armenian city of Tigranakert,” they wrote.