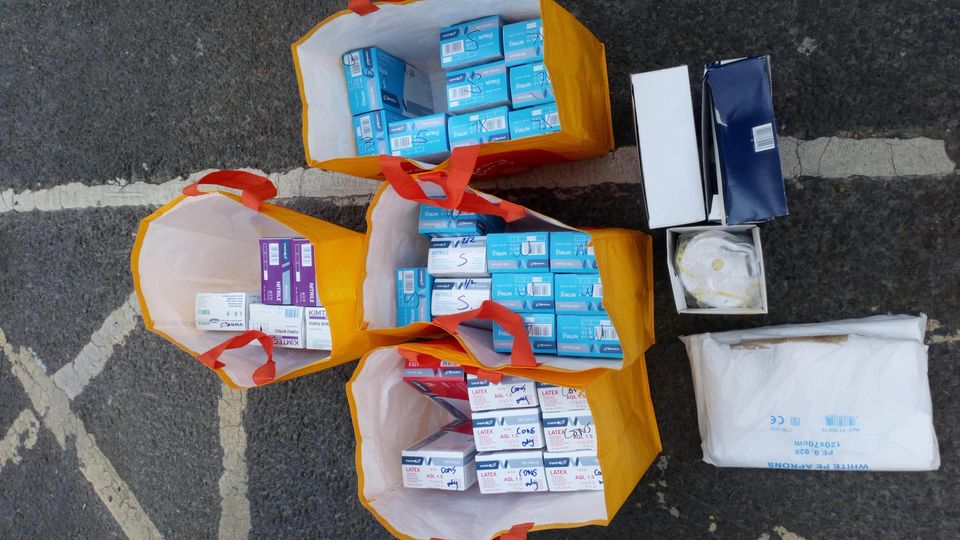 Personal protective equipment (PPE) such as gloves, masks, disposable aprons and goggles, usually used when handling works of art, have been donated to frontline health workers Courtesy of the Oxford University Museums

Conservators and curators working in more than 40 museums and private practices across the UK have donated personal protective equipment (PPE) to hospitals and ambulance services.

Tens of thousands of gloves, masks, disposable aprons and goggles, usually used when handling works of art, have been delivered over the past week in a bid to help frontline health workers who are facing shortages in equipment.

On Wednesday morning, a van-load of supplies was picked up by the London ambulance service at Blythe House—the shared storage facility for the British Museum, Victoria & Albert and Science Museum. Philippa Mackenzie, the head of collections move programme at the V&A, says PPE is used every day in museums “to protect staff from dirt, dust and hazards when handling and conserving collections—and in turn the gloves protect objects from the natural oils in human hands”. She adds: “During this unprecedented time, we are happy to be able to do something positive and support our vital emergency services in this small way.”

Gloves and masks from @V_and_A @sciencemuseum and @britishmuseum collected from #BlytheHouse to send to the London Ambulance Service @NHSuk @NHSEnglandLDN ! This is in addition to material sourced from V&A South Kensington. Yay! pic.twitter.com/0GbTMcirS7

Meanwhile, the Ashmolean Museum, the History of Science Museum and the Museum of Natural History have donated more than 10,000 items, chiefly gloves, masks, disposable aprons and coveralls with hoods. Two conservators—Morwenna Blewett and Sue Stanton—drove the supplies to London earlier this week.

The equipment was initially offered to Oxfordshire First Responders but was not required, so it was donated elsewhere. “The London ambulance service were so desperate they were going to use a taxi or courier to collect them from Oxford, but could not arrange this before lock down so we volunteered to deliver them to London on behalf of all Oxford University Museums,” the Ashmolean conservators say.

According to a spokeswoman for the Ashmolean, the initiative was started by Catherine Higgit, a scientist at the National Gallery who has family connections to the ambulance service. Others says they spotted a call out on Twitter asking museums to donate to the London ambulance service to support their coronavirus response and keep their frontline staff protected.

A spokeswoman from the British Museum, which has donated nitrile gloves and 3M masks in various sizes, says the institution has been in direct contact with the London ambulance service. “They were extremely responsive and very organised. They offered to come and collect the supplies from the museum so they could be taken to where they were needed,” she says. The donation came about, she adds, “from a very human sense of wanting to do something to help in these unusual times, however small it may be in the grand scheme of things”.

Small acts of kindness can make a big difference.
Thank you to @britishmuseum #science #conservation #collectioncare teams for collecting up spare #PPE last week. These gloves and masks are now with @Ldn_Ambulance #London #NHSHeroes #covid19 pic.twitter.com/3bK1llSBGm

Other institutions to have donated include the Horniman Museum, the National Gallery, the National Trust, the British Library, the Parliamentary Archives and Scotland’s national museums and galleries.

According to one of the conservators involved in the emergency conservators network, who wishes to remain anonymous, there are plans to donate more. She says: “A lot of us clocked there were shortages right around the time that museums and workshops were closing. So it was literally people grabbing boxes of things on their way out the door and then trying to figure out how to get it from someone’s house to a hospital or an ambulance service. There is more that can be given. There are institutions that have things that are now shut, they are just waiting until they can get back in.”

There are also plans for museums to donate quantities of the synthetic material Tyvek to a campaign led by a trio of young designers—Phoebe English, Holly Fulton and Bethany William—to create masks and hospital scrubs, both of which are in short supply. Tyvek is often used as padding to wrap works of art in or, in smaller quantities, for repairs.

“Phoebe is working with the NHS and the government to figure out designs that will be appropriate. The idea with the masks is that they will be made out of Tyvek and used by the non frontline people in order to free up the higher spec masks for the people who really need them,” says the conservator. So far “two big cultural heritage institutions have agreed to give large quantities of Tyvek to this operation”, she adds.

For many businesses, being agile at this time is key. As the conservator puts it: “Conservation is reasonably unseen, I don’t think it occurred to anyone else that we have these materials or the skills to help. It might be small quantities, but we are doing what we can.”