Mummified llamas, sacrificed to the gods by Incas, uncovered by archaeologists in Peru

The animals still had their ritual adornments, including necklaces and long, colourful tassels hanging from their ears 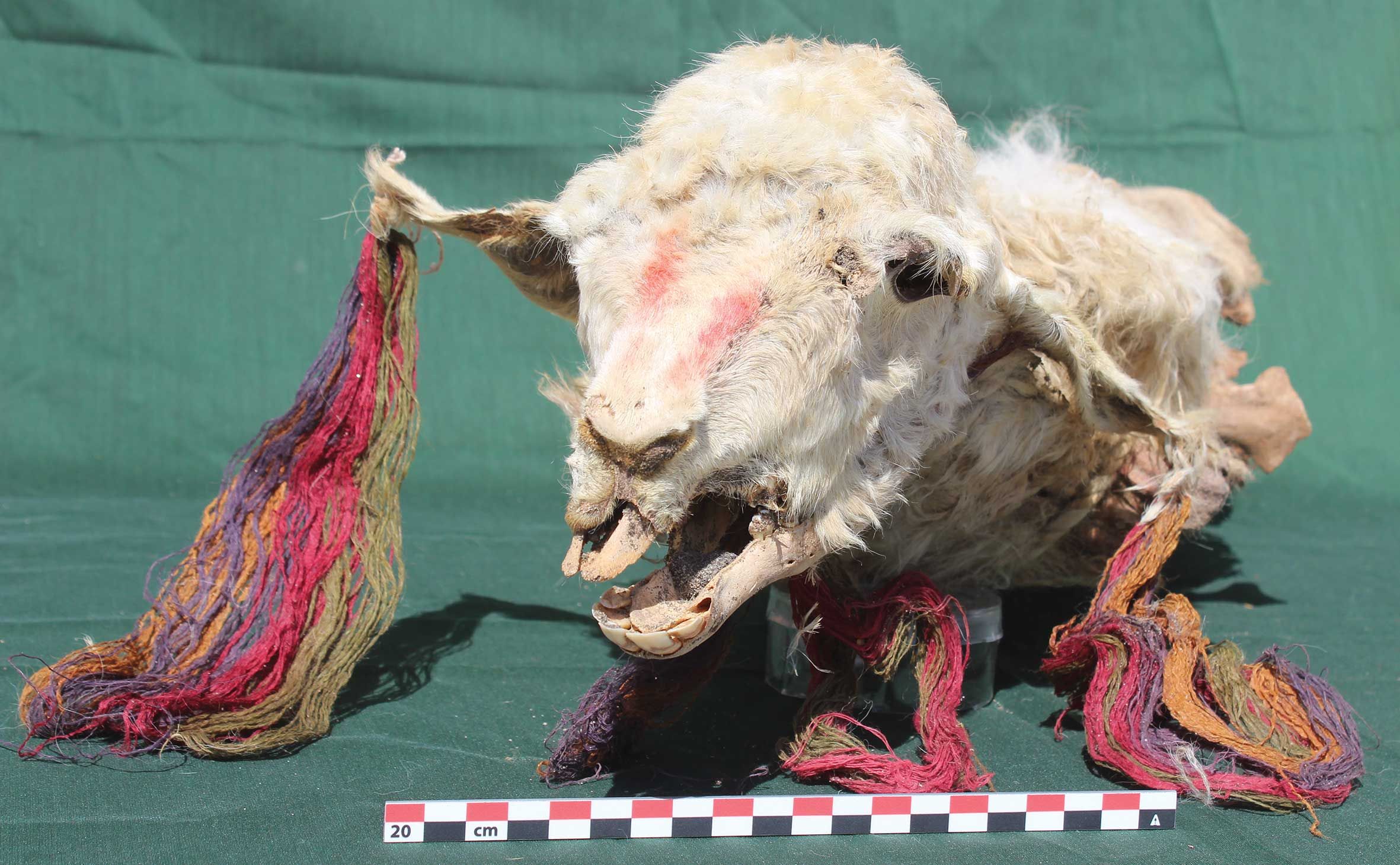 The Incas dressed the llamas in ritual adornments, including necklaces and long, colourful strings of red, green, yellow, and purple, which hang from their ears as tassels

Archaeologists have discovered a unique group of naturally mummified llamas in Peru. The Incas sacrificed these llamas as offerings to the gods at Tambo Viejo, 460km south-east of Lima, seemingly during celebrations after they peacefully annexed the region.

The preservation of the four young llamas, who were killed more than 500 years ago, is largely due to the dry environment of the Peruvian south coast, says Lidio Valdez, an archaeologist at the University of Calgary in Canada, who made the discovery along with colleagues from the Universidad de Huamanga in Peru. Archaeologists already knew that the Incas sacrificed llamas—often 100 at a time during ritual celebrations—but previously only their bones had been unearthed. “The finding adds important information about Inca ideology, something about which we knew from the writings of some early Spaniards, but never saw. Now we have the tangible evidence,” Valdez says.

According to the research paper, published in the journal Antiquity, the llamas still wear their ritual adornments, including necklaces and long, colourful strings of red, green, yellow, and purple, which hang from their ears as tassels. On three llamas, the Incas painted red lines between each llama’s nose and eyes, and put a red dot on their heads. “Exactly what [the decoration] means, I do not know,” Valdez says. “However, it can be suggested that the llamas were some sort of “special” gifts to the creator Viracocha and the Sun. The four colours [of the strings] perhaps have something to do with the four divisions of the Inca Empire.” 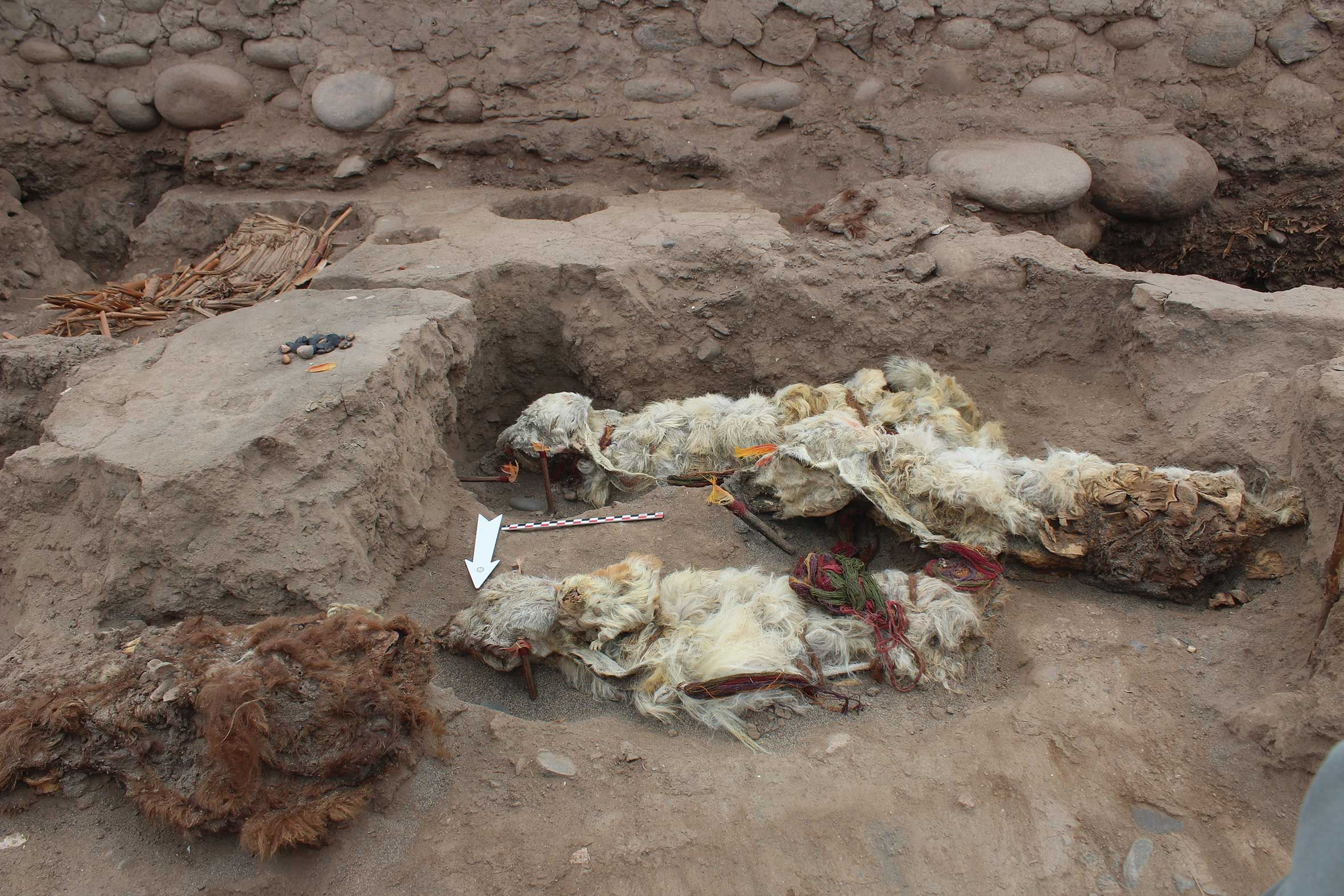 The four llamas (one brown and three white) were found at Tambo Viejo beneath buildings surrounding a plaza, along with mummified guinea pigs (many adorned like the llamas), orange feathers of tropical birds, and black beans Photo: L.M Valdez

The team discovered the llamas beneath buildings surrounding a plaza, along with mummified guinea pigs (many adorned like the llamas), orange feathers of tropical birds, and black beans, all covered in sand. The animals seem to have been buried alive. “It is possible that the Incas believed that the best gift to the supernatural entities had to be alive,” Valdez says, adding that the Incas are said to have also buried their own children alive as sacrifices.

Llamas were particularly important to the Incas, who used them as pack animals, and for their skin, meat and fertilizer. For sacrifices, they were regarded as second only to humans, Valdez says. “Incas understood that heavenly deities influenced human life, and that it was vital for humans to maintain a good relationship with the deities. The best strategy to do this was offering gifts. Gifts could not be just anything, but something valuable to the Incas themselves. So, llamas were one of the valuable items they had.”