Monuments are not the only problematic depictions of the past 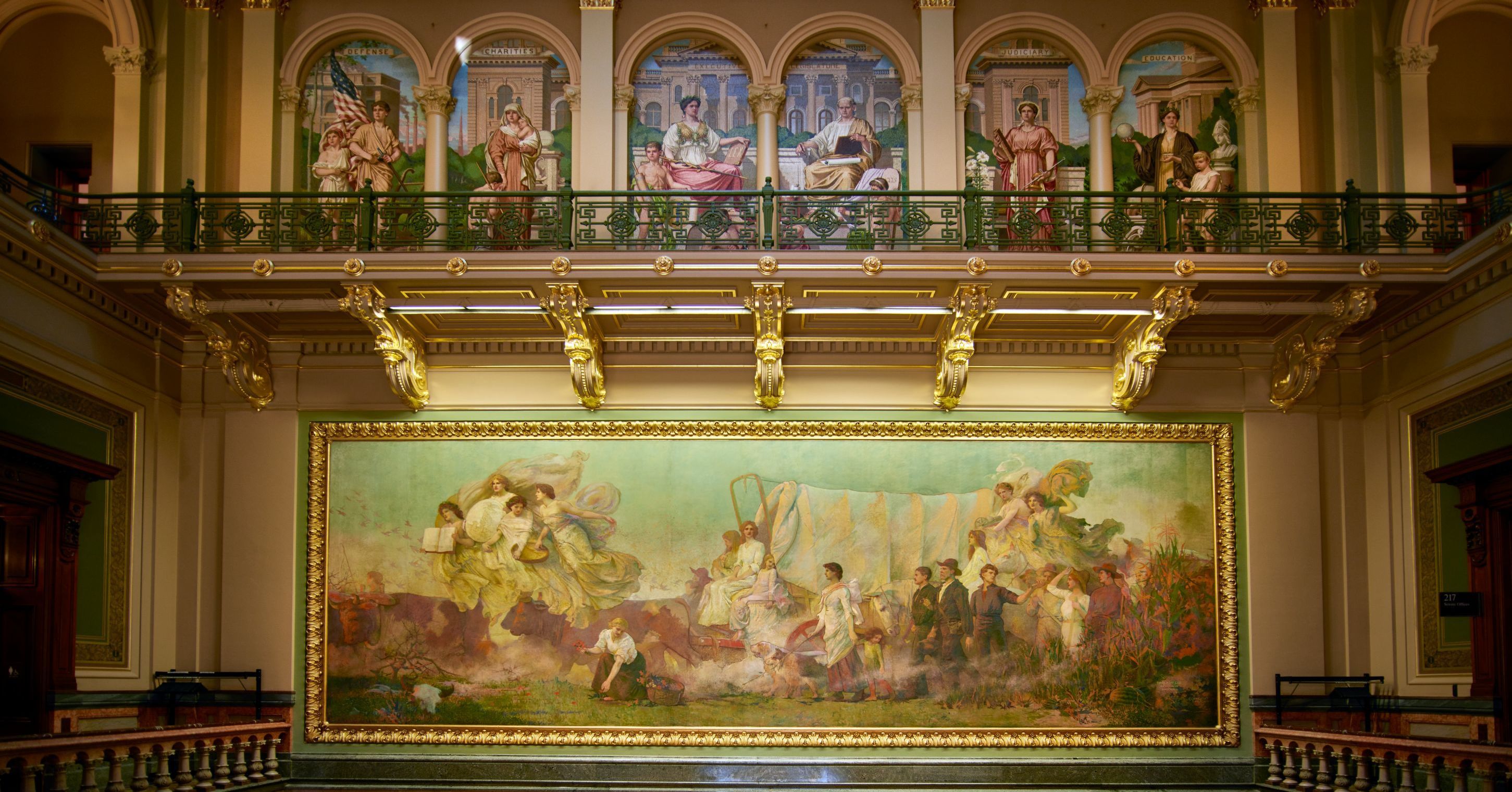 The mural Westward, at the Iowa State Capitol in Des Moines, by Edwin H. Blashfield, depicts the migration of white settlers Photographs in the Carol M. Highsmith Archive, Library of Congress, Prints and Photographs Division

While the removal of statues and monuments of problematic historic figures has been the focus of activist efforts in recent weeks, especially in the US, painted depictions of America’s racist history have also come under fire.

This week, a lawsuit was filed by the writer Wendell Berry to stop the University of Kentucky from removing a 1934 mural on its campus by Ann Rice O’Hanlon showing enslaved African Americans toiling in tobacco fields and entertaining white revelers. Students have called for the mural’s removal for years, and in 2015 the school covered the work with a white cloth until a long-term plan could be decided. The school president Eli Capilouto acknowledged that the work was a “terrible reminder” for many African American students of their ancestors’ subjugation, and that it provides “a sanitized image of that history”. In 2018, the university commissioned and installed a contemporary painting by the Black artist Karyn Olivier, that responds to the mural. Olivier says that removing the original mural would “censor” her piece, which she would also want to be removed. “My work is dependent on that history,” Olivier told the New York Times.

In Iowa, the Indigenous women-led activist group Seeding Sovereignty delivered a letter to officials seeking the removal of monuments and a mural from its State Capitol in Des Moines. Painted in 1905 by the New York artist Edwin H. Blashfield, Westward depicts the migration of early settlers through Iowa and is prominently displayed across the building’s grand staircase. "I feel it is a century long's attempt at trying to erase the history of Indigenous peoples,” Ronnie Free, a member of Great Plains Action Society, told the Des Moines Register. “It covers up genocide. The term whitewashing comes to mind. I think they're horrible, and I hate that my children have to see that.” Activists are calling for the mural and monuments to be replaced with works that celebrate the state’s Indigenous history.

Similarly, many people have asked for several murals in the Chicago Board of Education’s Garfield Park offices showing interactions between European settlers and Native America to be removed. “Unless [Chicago Public Schools] plans to show the slaughter of indigenous Americans and white invaders passing out Small Pox infected blankets, enslaved Africans in chains being whipped, raped and sold, then remove it all,” one person wrote in a forum on the board’s website. “The days of painting early white Americans as saviors are over. Tell the whole truth.” In February, the school district adopted a new policy that will create a steering committee to “evaluate concerns raised about specific works of art to ensure equity and cultural responsiveness”, and make recommendations to the board on how to address such complaints.

Members of the Iberia Parish community in Louisiana would also like to see a mural in their local courthouse taken down. Painted by the artist Conrad Albrizio in 1940 when segregation was the law of the land, The Struggle of Man shows a heroic lighter-skinned figure standing over people of colour who appear to be fighting and gambling. “A person that's going there to be tried by a judge cannot feel good about the situation when he looks above the judge's head and sees some superiority complex,” Elton Broussard, told the local KATC news station. The parish president Larry Richard is discussing what should be done about the mural, which has previously had curtains hung around it that could hide the image from view, with the council.

And some works painted more recently have also stirred debate. A petition signed by more than 700 people asks officials in Red Hook, upstate New York, “to confront small town racism” by repainting a mural which many believe depicts an enslaved woman tilling a field. The NAACP added its support to the request last month, but one of the local artists who painted the mural in 1996 says the central figure’s darker skin colour was not intentional, and she was just meant to be a farmer. "When I painted that, I was an amateur, new artist. I had done one or two paintings of a face. That is not easy to do,” Andres San Millan, told the Poughkeepsie Journal. The owner of the building soon after painted over the mural, saying the decision had been in the works for months “to create a new canvas for a new mural for 2020 and beyond”.