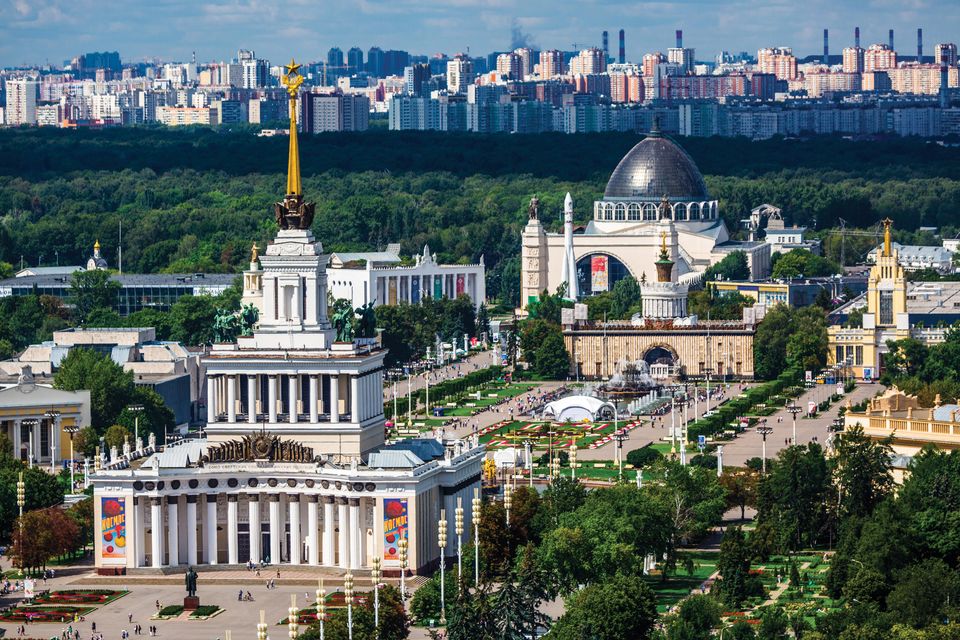 A view of the VDNH site, with the distinctive dome of the Cosmos Pavilion VDNH

The Russian capital is planning to create a vast museums complex to rival European equivalents such as Berlin’s Museum Island and Vienna’s MuseumsQuartier. Next year, “a dozen museums will open within walking distance of each other” at VDNH (Exhibition of Achievements of the National Economy), a Stalin-era fairground of over 235 hectares in north-east Moscow, according to its general director Ekaterina Pronicheva.

Inspired by the 19th-century world’s fairs and exhibitions in London and Paris, VDNH began life in 1939 as an agricultural showcase for the Soviet Union, with dozens of elaborate pavilions representing the different republics and industries. In the 1990s, the site lost state funding and became a flea market. Now, like much of Moscow, it is in the throes of a massive reconstruction programme backed by the city government.

“VDNH is a territory with no precise counterparts in the world,” the fairground’s press service says, but its redevelopment is modelled on other “big parks and exhibition complexes” worldwide. The first phase of the project is expected to be complete in 2018. The regenerated site—which also includes an amusement park, an aquarium and Europe’s largest ice rink—aims to attract 40 million people a year.

Among the Moscow museums that will launch outposts or move there are the State Museum of Oriental Art and the Cinema Museum. VDNH pavilions already house Rosizo, the exhibitions centre of Russia’s ministry of culture; the Museum of Vintage Music; and a branch of the Polytechnic Museum of science and technology. In August, the collection of the Worker and Kolkhoz Woman Museum, in the base of Vera Mukhina’s eponymous 1937 statue nearby, was transferred to a soon-to-open museum at VDNH devoted to the fairground’s history.

Meanwhile, the Cosmos Pavilion is being restyled as the Cosmonautics and Aviation Centre. With exhibits contributed by Russia’s space and defence industries, including a full-scale mock-up of the Mir space station, the venue will operate more as an interactive centre than a traditional museum, says Ekaterina Mochalina, the head of museum and exhibition programmes at the site.

The complex was previously criticised for whitewashing the Soviet past, staging shows of Social Realist art and hosting Russia—My History, a patriotic multimedia display conceived by Bishop Tikhon Shevkunov of the Russian Orthodox Church. The press service says, however, that it is addressing the darker side of the Soviet era by helping to produce a documentary about the fairground’s original architect, Vyacheslav Oltarzhevsky, who spent several years in the Gulag.

Some of the recent and forthcoming events at the site would have been unimaginable under the Soviet regime, such as a festival of Jewish culture and exhibitions about the avant-garde art that Stalin suppressed.

The US sculptor Daniel Arsham is to have his first Russian solo show at the Karelia pavilion on 30 September, as part of the seventh Moscow International Biennale of Contemporary Art (until 18 January). The biennial's main project, including works by Matthew Barney and Olafur Eliasson, opened last week at the State Tretyakov Gallery.