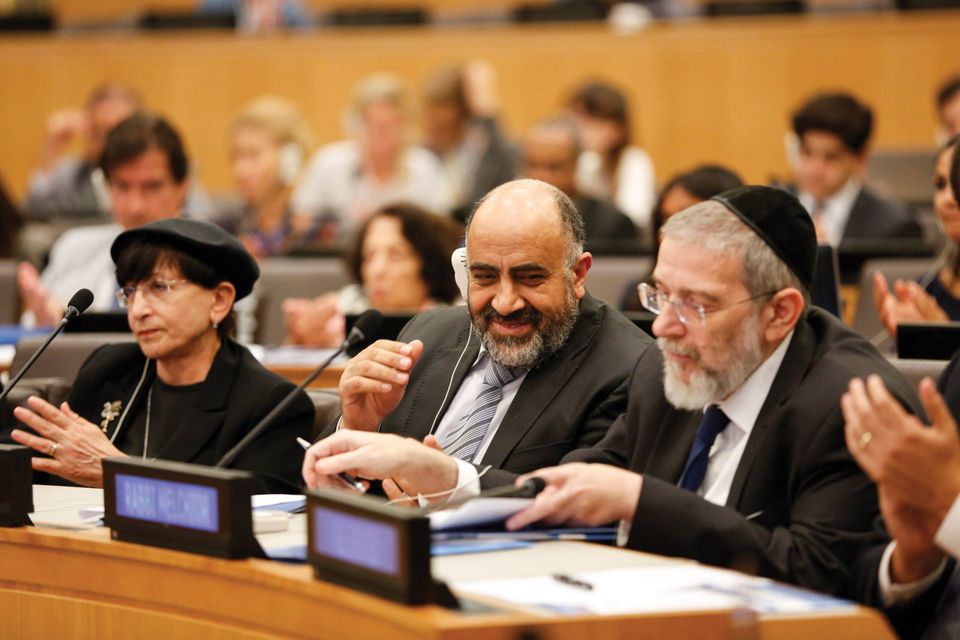 A remarkable alliance of Israeli orthodox rabbis and Muslim religious leaders in the Middle East is mediating behind the scenes following the anger and violence sparked by President Donald Trump’s recognition of Jerusalem as Israel’s capital last month.

As demonstrations continue throughout the region, Israeli forces clashing with Palestinian protesters and Israeli air strikes following rockets fired from Gaza have left at least a dozen Palestinians dead and hundreds injured.

The US Jerusalem declaration has also emboldened Arab calls to boycott associations with Israelis. But these Muslim and Jewish religious scholars remain dedicated to non-violent strategies for securing rights and security for both Israelis and Palestinians and to “stop people killing”, Sheikh Imad Falogi, a former Hamas leader in Gaza, tells The Art Newspaper.

The covert interfaith efforts, which religious leaders describe as a “religious peace network”, began in the early 1990s and spread across Israel, the West Bank and Gaza, focusing especially on maintaining the peace in Jerusalem and its holy sites. In 2002, the senior Egyptian mufti Mohammed Sayed Tantawi joined several Holy Land religious leaders and the Archbishop of Canterbury to sign the Alexandria Declaration, a set of shared religious principles for non-violence.

Today the coalition includes a growing number of Muslim scholars in almost every Arab country; the network stretches from the North African Arab states to Middle Eastern countries, including Egypt, Jordan, Syria, Saudi Arabia, Kuwait and Iraq. Some Muslim leaders have met with Israeli orthodox rabbis in Spain, Italy, Norway and Turkey. While they primarily focus on improving Jewish-Muslim relations, they also maintain close connections with church leaders from Jerusalem, Israel and the West Bank. The Pope is kept apprised of their work, they say.

Despite anger with the US declaration that it will move its embassy to Jerusalem and with Israel over Palestinian rights, “big” numbers of Islamic leaders in the Middle East and around the world want to work with these Israeli rabbis “for a real peace and political and community rights”, Falogi says. Religious leaders must play a role, he explains, because they can achieve results better and faster than politicians as they have “more power in the Middle East”.

Falogi also says that the rabbis he sees as his allies have studied the Quran, as he has studied the Christian Bible and Jewish holy texts. “The rabbis in this network understand us—our religion and rights—better than the politicians.”

Avi Gisser, an Israeli orthodox rabbi who heads the West Bank settlement of Ofra and is chair of Israel’s national religious education council, has deep respect for his Islamic partners. “I teach in the Jewish religious community that we need to build our life together, Jew and Arab, Jewish and Muslim; there must be equality, not separation,” he says. Gisser also now teaches on Islam and Palestinian rights, and advocates for interfaith connections for “security and to fight terror”.

“It is dangerous to talk to rabbis but I’m convinced it is good for the two sides,” says the Islamic law scholar, Ali Sartawi, who served as a Hamas-affiliated minister of justice in the 2007 Palestinian government. “We can’t build peace with the political side only. I don’t have any problems with Jewish people on the Israeli side. I respect the Jewish religion. But if fundamentalists grow on both sides, I will be afraid.”

“Of course there are extremist Jews and Arabs who don’t like [this alliance],” Gisser says. “But in the general population there is a lot of will for closer relations.” Earlier this year, when Sheikh Abdallah Nimer Darwish, the co-founder of the Islamic Movement in Israel who also helped to set up the religious peace network, died, Gisser visited the mourning tent and was invited to speak. “They accepted me,” he says.

The US Jerusalem announcement was widely seen as pre-empting the stalled Israeli-Palestinian peace process. After Israel captured East Jerusalem from Jordan in 1967, it declared the territory part of its capital. But Palestinians and most of the international community consider East Jerusalem to be occupied and do not recognise Israeli sovereignty there. Palestinian residents in the area, who mostly do not have Israeli citizenship, want East Jerusalem to be recognised as their capital and to have equal rights. To Muslim and Christian Arabs, the US declaration is also a threat to the sacred spaces of East Jerusalem’s walled Old City, which is home to numerous sites holy to Judaism, Christianity and Islam, and Jewish, Armenian, Muslim and Christian Arab quarters. 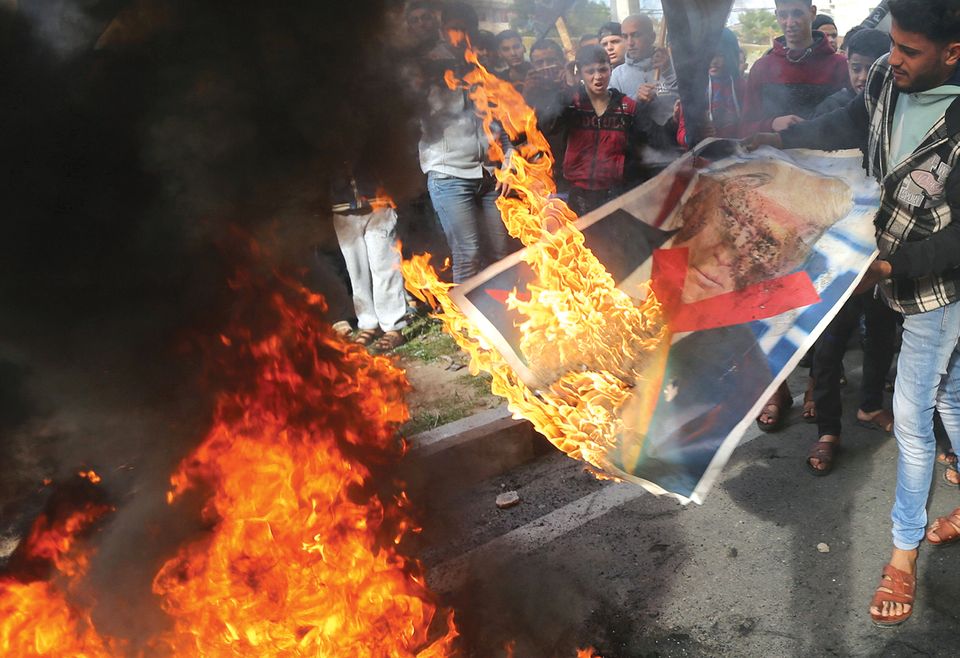 In the wake of Trump’s announcement, the network’s members have been scrambling to convince authorities and communities to avoid provocation and violence across the region, and especially in Jerusalem and at its most contested holy site, known to Jews as the Temple Mount and to Muslims as the Haram Al Sharif, or noble sanctuary. The location of the second temple, destroyed by the Romans in AD70, remains the holiest site in Judaism. For centuries, the compound has been home to Muslim shrines, including the Al-Aqsa mosque, the holiest Muslim site in Jerusalem and the third holiest site in Islam.

It is critical for people to understand the strong emotions surrounding this site in the Arab world, says Sheikh Raed Bader, an Islamic law arbitrator and the leading legal authority of the Southern Islamic Movement of Israel. “Al-Aqsa is like Mecca” for Muslims everywhere, he says. At the same time, Bader says that many hours of conversations with rabbis have helped him to understand Jewish connections to holy sites, too. “We have tried to find the most positive, deep, creative solutions,” he says.

The challenges to keeping the peace at the site are daunting. In recent years, religious and nationalist Jews have visited the site in much bigger numbers, while male Muslim worshippers aged under 50, who can be prohibited by Israel from visiting their mosque, say they feel disrespected and disenfranchised.

The Jerusalem rabbi Michael Melchior, a former cabinet member in Israel who co-founded the religious alliance, says the coalition is “always on guard”, as the holy site is “nuclear”. Tensions peaked in July, leaving several dead on both sides. But the violence would have been significantly worse if the network had not intervened, Melchior says. Extremists “who wanted to create a world war, a clash of civilisations, would have had thousands of people killed,” he says. “We were three minutes away from that happening. I had many calls from the chiefs of police. We negotiated the situation before the whole Middle East went up in flames.” The Muslim scholars tell the same story. Together they helped mediate between the Waqf, the Islamic council appointed by Jordan to oversee Muslim sites in the Old City, “with the support of a lot of players in the Muslim world and the Israeli police, approved by the Israeli cabinet”, Melchior says.

Radicalisation of Muslim and Jewish stakeholders at the Temple Mount/Aqsa Mosque complex is “aided and abetted by end-of-days Christian evangelicals who are exacerbating tensions,” says the Israeli lawyer Daniel Seidemann, a Jerusalem expert who advises policymakers.

“The next eruption of violence is only a matter of time,” he says. “These are growing religious movements that have weaponised faith, whose claims are exclusive, existential and absolute—Biblically driven Christian settlers, the messianically driven Jewish Temple Mount movement, the various iterations of extreme Islam, and ‘end-of-day’ Christians. The traditional religious leadership—the Holy See, the orthodox patriarchy, the mainline Protestant churches, chief rabbis and the traditional sharia courts—are being marginalised.”

As a result, Israeli relations with Jordan, the custodian of Muslim sites, have never been worse. But engaging the faith communities could help, Seidemann says. “I don’t think anybody is considering turning over the political processes to faith communities or giving religious leaders a formal place at the negotiating table,” he says. “There is, however, a greater awareness that failing to address the faith dimension of this conflict has grave ramifications, creating flawed political processes, undermining the integrity of the city and potentially destabilising it.”

Until there is a peace agreement and rights and security on the ground for all residents, the network is trying to fill in where political, diplomatic and security efforts fail. “We are not a government or in power. But if we get requests to help, we all try to help each other,” Melchior says. “We do interventions all the time.”

Resolving sectarian disputes in Jerusalem can reverberate widely, Bader believes. “We need Muslims and Jews to explain that peace is not only good for Israelis and Palestinians, but a model that influences Libya, Iraq, Syria and Algeria. We want to meet rabbis who are of the same mind. I don’t meet with rabbis or sheikhs who want to make war," the sheikh says. "Look what happened in Egypt: 300 people in prayer killed in the name of religion. This also happens in Syria, Iraq, Yemen and elsewhere. The people who do this do not represent our texts and do not represent God.”