The artists on the frontline of Myanmar’s deadly protests 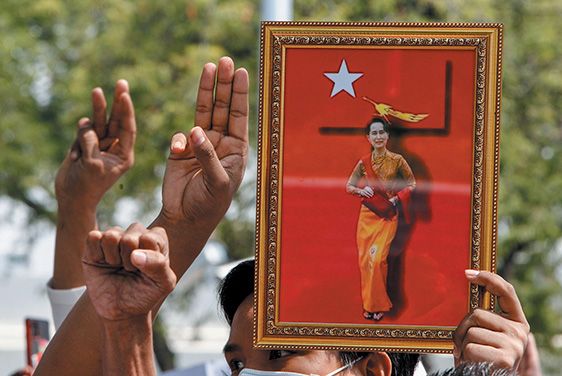 At least 18 more protesters were shot and killed by the Myanmar police yesterday, according to the United Nations, with over 30 injured and hundreds detained often violently. Three were shot dead earlier in a long February of resistance. Artists have been at the front lines of mass protests, expected to escalate today, since the military overthrew the country’s democratically elected government on 1 February and arrested senior officials including Aung San Suu Kyi and the president U Win Myint.

The Tatmadaw military, led by Min Aung Hlaing, is justifying the coup with unsubstantiated allegations of fraud in a November election that saw Suu Kyi’s National League for Democracy party win by 83%.

“We artists are fighting together with civilians to dispel the military coup which causes injustice, oppression and the lack of basic human rights,” the veteran activist artist Aye Ko tells The Art Newspaper. “We also request artists from international countries to stand with us and support us for justice.”

We artists are fighting together with civilians to dispel the military coup Aye Ko, artist

The Association of Myanmar Contemporary Art is “making art and fundraising to support the CDM [civil disobedience movement]”, says Nathalie Johnston, the director of Myanm/art, an art and community space she founded in 2016. “Gen Z [is] really the driving force with online posters and slogans, campaigns and memes,” she says. They are giving voice to the protests and spilling onto Facebook and Instagram despite internet blackouts.

Protest art—alongside literature, poetry, music and performance—has a rich tradition in Myanmar, formerly known as Burma, and its artists are no newcomers to the streets. The military took control of the country in 1962, following independence from Britain in 1948, only relaxing its grip in 2011. Myanmar seated its first democratically elected government in 2015. Ko, who in 2008 founded the non-profit New Zero Art Space in Yangon, was imprisoned for three years from 1990 after joining the 8888 protests of 1988 and organising one of Myanmar’s first contemporary art shows titled Modern Art 90.

The curator Khai Hori, who from his Singapore base has frequently worked with Myanmar artists since 2011, says the country has a “depth, richness and sophistication in thought and expression that runs deep in its society”. He says that Myanmar’s people are “informed by poetry, music, satire, art, spirituality and shared life experiences under various regimes since the 1940s. Artists such as Aung Myint, Po Po, Nyein Chan Su, Aye Ko, Nge Lay and Suu Myint Thein have never ceased making art embedded with coded political messaging all these years and they are definitely not about to stop doing so right now”.

Myanmar’s performance and visual art scenes, which were long active underground, exploded after democratisation. Art spaces such as New Zero and Myanm/art have also provided platforms for emerging civil discourse around women’s, LGBTQ and minority rights. Johnston says that former capital Yangon alone has more than 40 galleries, and there is a diversity of genres and regional scenes throughout the country of 54 million people.

“Shows abroad only feature the political because that’s what the international art scene tends to want from Myanmar,” Hori says. Despite facing politics head on, artists have shied away from the democratic government’s deadly crackdown on the Muslim Rohingya minority, which sent around one million fleeing to Bangladesh since 2016. Johnston says, “A few artists such as Htein Lin, Thynn Lei Nwe and Khin Thet Htar Latt have touched on it, but there is no strong stance or visual language explored as yet from the artists living in Myanmar.”

The dominant visual languages instead have remained in performance, photography and video. “Performance art [dominates] due to its association with protest art,” Hori says, and for its portability. “Video and photography were used because they could be stored and ‘hidden’ in thumb drives and transported quite easily,” he says, although some of the best art coming out of Myanmar has been “visceral and temporal in nature”, often “destroyed soon after it was presented”.

Censorship in Myanmar was only partially relaxed after 2015, but internet access alone proved transformative, and social media platforms are proving as useful for organising civil disobedience as they were for showing art.

However, Myanmar’s junta is now seeking to introduce a cybersecurity bill that would penalise broadly defined online dissent with up to three years’ imprisonment. Myanmar artists are “obviously terrified”, Johnston says. “That’s why they’re protesting”.

UPDATE: This is an updated version of an article that appeared in the March issue of The Art Newspaper