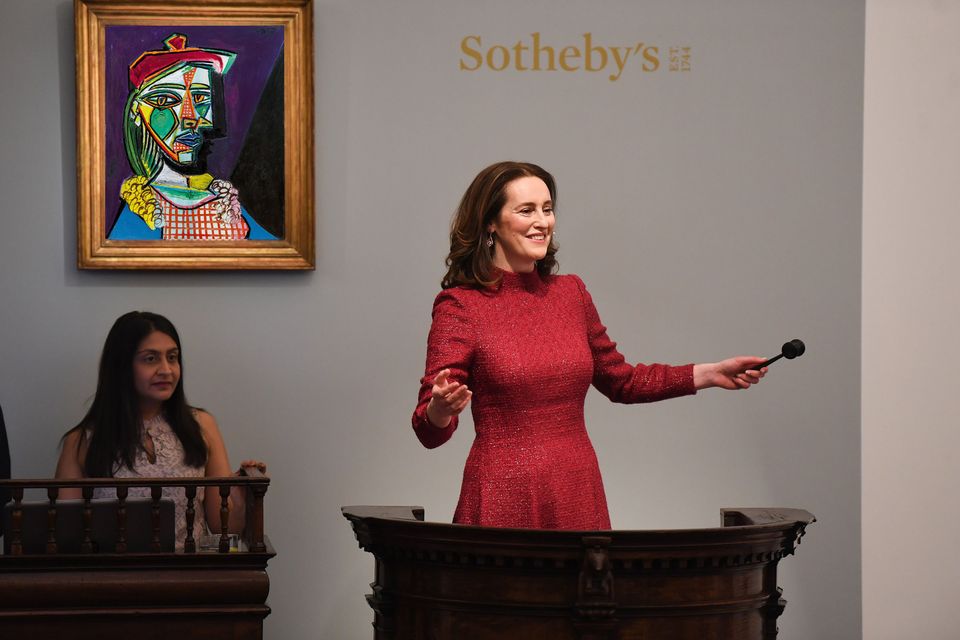 A man in a grey suit and Salvatore Ferragamo tie has been talk of this week’s Impressionist and Modern art sales in London. Quietly bidding with a twitch of the spectacles, Harry Smith of the London-based advisors Gurr Johns was determined to take home every Pablo Picasso going in the evening auctions, first at Christie’s then Sotheby’s. But who was he buying for?

After buying eight Picasso works at Christie’s on Tuesday night, for between £320,000 and £13.7m for the sale’s top lot, Mousquetaire et nu Assis (1967), Smith was back for more at Sotheby’s last night. There he bought four Picasso works, including the top lot of the week—Picasso’s zinging 1937 portrait, Femme au béret et à la robe quadrillée (Marie-Thérèse Walter). Smith had been bidding in the room against an Asian buyer on the line with Patti Wong, the chairman of Sotheby’s Asia. At £41.2m he appeared to stop, but in fact started bidding on the phone through Sotheby’s deputy chairman Mark Poltimore, standing a few feet away. Smith bought the portrait, against Wong, at £49.8m (above an estimate in excess of £36.5m), the second highest amount paid for a work of art in Europe in pounds sterling.

Asked if he could comment on the identity of his client, Smith says: “I’m afraid I can’t. We buy and consign at auction regularly on behalf of clients, but confidentiality and discretion are paramount.” The Marie-Thérèse, Smith says, is “a masterpiece portrait” made particularly desirable by “the subject, the date, the condition, the provenance, and the fact it’s completely fresh to the market, offered at auction for the first time, having been in the family for so long. The market has a fairly regular supply of Picassos, but it’s rare to see a painting as special and as fresh to the market as this.”

On the market for Picasso, Smith says the regularity with which his works come up at auction “helps to keep momentum and confidence in his market, and uniquely, three of his paintings have already sold at auction for over $100m. He was briefly in the shadows of the Salvator Mundi last year, but he’ll be back in the limelight in 2018 with events like the upcoming exhibition at the Tate and the Rose Period portrait being sold from the Rockefeller collection.” Supply tends to dictate demand, Smith says, and “the market for his late works had grown hugely over the last decade. This week, his later works seemed to have found their level, but any earlier works that are fresh to the market tend to attract the most attention.”

Marie-Thérèse contributed more than a third of the total of Sotheby’s £136m evening sale of Impressionist, Modern and Surrealist art—in 2017, the equivalent sale made £194.7m, Sotheby’s highest ever total for a sale in London, topped by Gustav Klimt’s Bauerngarten at £48m. This year, 77% of the 47 lots sold and Sotheby’s tighter approach was appreciated by a crowd thinking of getting home in a snowbound London (particularly given the painfully slow phone bidding). 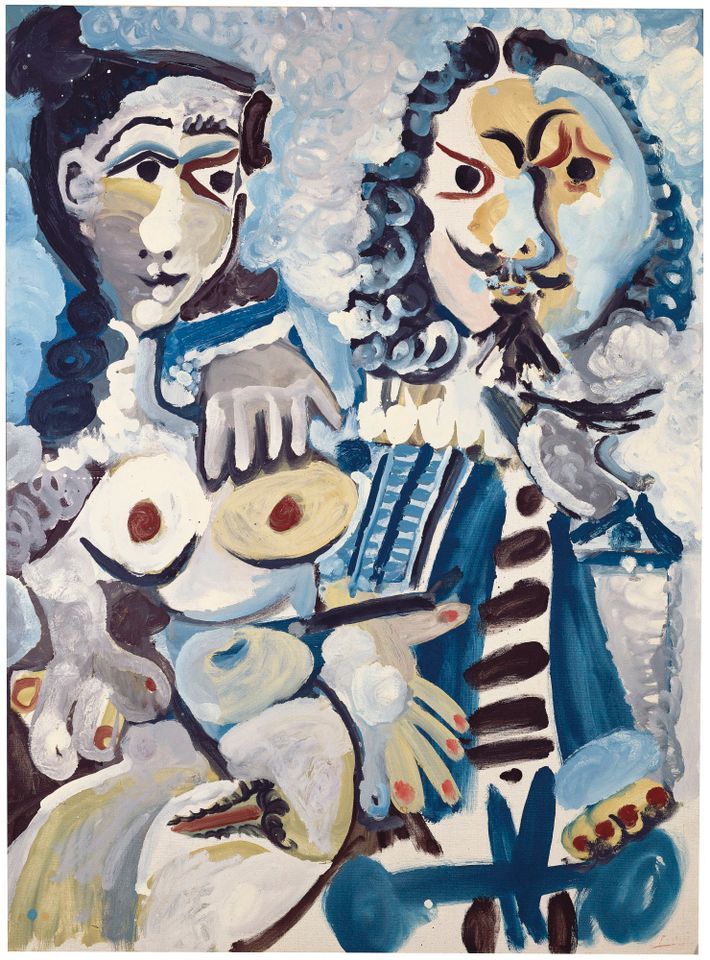 The night before, Christie’s enormous 97 lot evening auction of Impressionist, Modern and Surrealist art took three hours. It may have totalled £149.5m from 78% sold by lot—Christie’s second highest result for a February sale in the category and up on last year’s £136.8m total. But the wisdom of such large sales in the evening is questionable, as the Surrealist section at the end arguably suffered as attention spans wavered and stomachs grumbled.

As the London dealer Stephon Ongpin says: “Late period Picasso certainly gets most of the attention this season”. But seeing the taut freshness of the earlier 1937 Marie-Thérèse, springing from its purple ground, hung next to the larger La Matador (1970) did few favours to these late matador paintings, rendered somewhat flabby by comparison. Still, La Matador was the second highest lot of Sotheby’s sale at a mid-estimate £16.5m, selling (of course) to the advisor Harry Smith to go with the 1967 musketeer he bought at Christie’s for £13.7m the night before.

The London dealer Hugh Gibson of Thomas Gibson Fine Art observes that “classic Impressionism is a market that is fairly thin on the ground in terms of supply for A+ quality works and the market is not what it once was”. But he sees “a constant desire for top quality, brightly coloured Fauve works whose prices seem to continuously rise”. Among the latter might have been André Derain’s Londres: la Tamise au pont de Westminster (1906-07, est £6m-£9m) which was withdrawn at Christie’s just before the Tuesday night sale. Sotheby’s, however, did sell its Derain—the humming Bateaux à Collioure (1905)—at £10.8m (£7.5m-£10m) to Acquavella Galleries. Illustrative of the rise of the Fauve market, this work previously sold at Christie’s in February 2011 for £5.8m.

Also picked out by Gibson was Edgar Degas’ intimate pastel of a couple at the opera, Dans le Coulisses (around 1882-1885), its closely cropped composition showing the influence of the birth of photography, which sold at £8.9m to Christie’s Olivier Camu’s phone bidder. 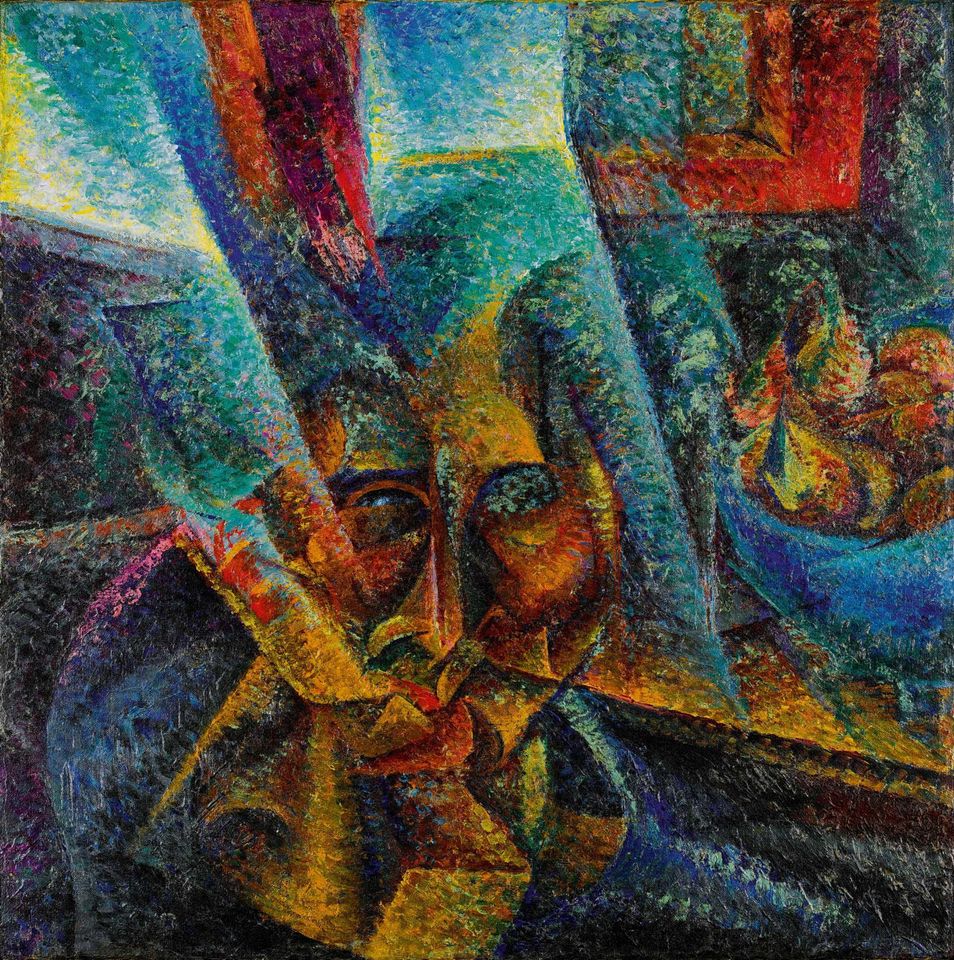 One of the most interesting lots was at Sotheby’s—the dynamic Testa + luce + ambiente (1912) by Umberto Boccioni, the first Italian Futurist oil painting to be sold at auction in nearly three decades. It sold on the phone (underbid by Acquavella) at £9.1m (est £5.5m-7.5m), four times Boccioni’s previous auction record. “No-one really had any idea how to value it, because Boccioni oils are so rare”, says Philip Hook, senior director of Sotheby’s Impressionist and Modern art department. “I first saw it in 1996 in Stuttgart at the Staatsgalerie. The then owner asked me to draw up a proposal to sell it, which was for considerable less. They turned us down and sold it privately in 1998. Ten years later, the buyer decided to bring it back to us.”

Other auction records fell at Sotheby’s for the British sculptor Lynn Chadwick—Pair of Walking Figures (1977) at £2.5m (est £600,000-£800,000)—and the British Surrealist, Eileen Agar, when her mixed media assemblage The Wings of Augury (1936) sold for £72,500. At Christie’s, another record was set for a British Surrealist—Roland Penrose (Artifact, £75,000)— alongside highs for the Belgian abstract artist Georges Vantongerloo (Composition émanante de l’équation y=-ax2+bx+18 at £1.2m) and the Russian-born French sculptor Antoine Pevsner (Deux cones dans un même planat £788,750) 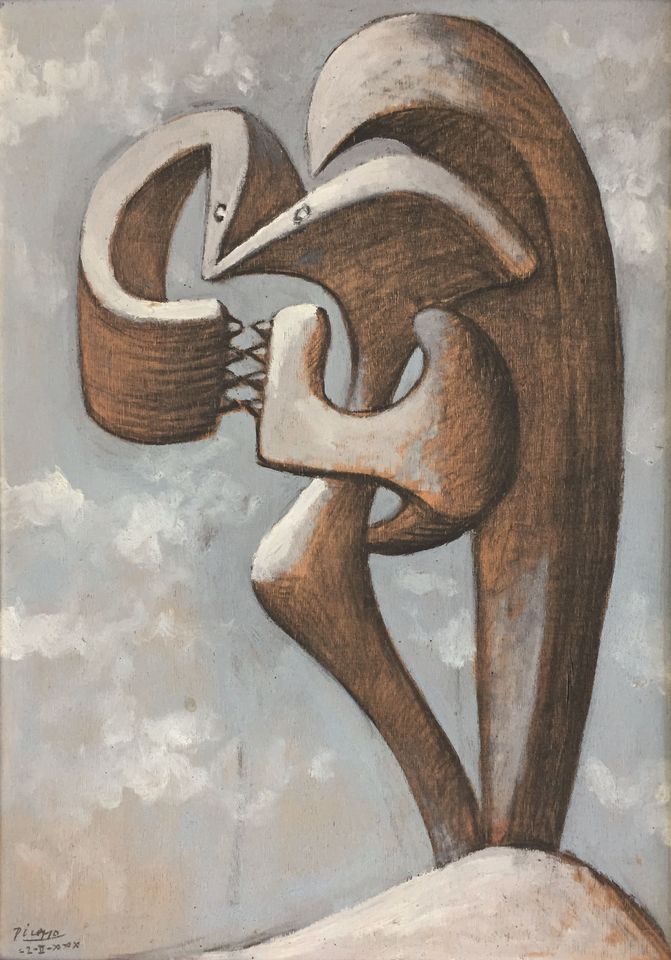 Harry Smith of Gurr Johns, buyer of all those Picassos in the first part of Christie’s sale, had strangely left by the time the top lot of the Surrealist section came up—the eerie Figure (1930) by Picasso, from a sparkling little collection of an anonymous architect, identified by Colin Gleadell of The Daily Telegraph as social housing pioneer Harry Gluck, who died in 2016. Figure sold to an Asian bidder on the phone at £8.3m, twice the estimate.

In the equivalent sale last year, Christie’s set a new record for René Magritte’s when La Corde Sensible (1960) made £14.4m, a record then broken at Christie’s New York in November, when L'empire des lumières sold for $20.5m, apparently to an Asian buyer. This year, Le groupe silencieux (1926) realised half that record, selling for £7.2m on the phone. As Asian buyers turn their attention to Surrealism, Magritte is fast becoming a new favourite, says Christie’s Olivier Camu—who started both the specialist Surrealist and Post-War Italian evening sales—and of the seven Magrittes sold in the sale sold, several went to Asia, Camu says.

Earlier this week, Luxembourg & Dayan opened a show of Magritte’s early word paintings from 1927-30 (until 12 May) in London and gallery director Alma Luxembourg says a resurgence in interest in Magritte has been boosted by recent exhibitions at the Museum of Modern Art in New York and the Pompidou in Paris. “The interest is more global than it has been, so not just European but also buyers from America, Asia and the Middle East” Luxembourg says. Magritte’s early works are particularly evident this week and, Luxembourg says: “Until now, the late 1950s and 60s were the most sought after works, but we have seen in the last few years a shift and re-evaluation of the early part of his work”.

At Sotheby’s, Magritte’s gouache La Perspective Amoureuse (1936) sold to the New York-based advisor Mary Hoeveler for a client for £1.9m (est £1m-1.5m), “which was a little more than we wanted to pay, but Magritte is so hot, he always has been” Hoeveler says. A newer development, she thinks, is the level of interest in Francis Picabia, including from Asia—the previous night at Christie’s, Hoeveler had been bidding on Francis Picabia’s collaged relief Sans Titre (Pot de fleurs, 1924-25) which sold for more than twice the high estimate at £3m. “Bidding had been quite flat until then, then suddenly it kicked off for that work. Typical!” Hoeveler says.

At Sotheby’s, Hoeveler also underbid Picabia’s portrait Espagnole (around 1941-42), which went to Patti Wong, the chairman of Sotheby’s Asia, who was bidding all night for one client on the phone—often at painfully small increments, testing auctioneer Helena Newman’s patience. “Oh come on Patti, we will be here all night!” Newman said, exasperated, at one point as Wong’s client attempted to split the bid on Salvador Dali’s Gradiva (1931), which she eventually bought at £2.6m. The luminous little oil on copper was one of three rediscovered works by Dali from the collection of his friend, the Argentinian Condesa Cuevas de Vera, who bought them from the artist in 1930s. Wong’s client (eventually) bought the lot for £6.3m, including the top lot of Sotheby’s Surrealist portion—Dali’s Maison pour érotomane (around 1932) at £3.5m.