The young woman in the brothel who was given Van Gogh’s ear can be revealed for the first time by The Art Newspaper as Gabrielle Berlatier, a farmer’s daughter. This solves a mystery that has remained unsolved for nearly 130 years.

Although not named, the woman was referred to in Bernadette Murphy’s book, Van Gogh’s Ear: The True Story, published by Chatto & Windus last week. Murphy wrote that she made a promise to Gabrielle’s descendants: “Until I am given permission by the family to reveal her surname, I will respect their wishes and keep it private.” Murphy kept to her word.

The Art Newspaper has followed up details given in her meticulously researched book by using an open archive. We tracked down the woman’s name in the records of the Institut Pasteur in Paris, where Gabrielle had been treated for rabies. Identifying her throws fresh light on the bizarre incident in which Van Gogh cut off nearly all his ear.

The Institut Pasteur medical records reveal that 18-year-old Gabrielle Berlatier lived at the Mas de Faravelle in Moulès, a village ten kilometres east of Arles, in Provence. On 8 January 1888 she had been bitten on her left arm by a dog owned by the farm’s shepherd, Monsieur Moreau. The dog was shot and found to have had rabies. As Murphy’s book records, Gabrielle then suffered the painful process of having the wound cauterised with a red-hot iron, leaving a disfiguring scar. She was quickly taken to Paris, where she was treated with a new anti-rabies vaccine, saving her life.

The woman’s first name was revealed as Gaby in 1936, in an article that quoted Alphonse Robert, the policeman who had been called to the brothel where Van Gogh took his ear. This incident, which would become the cause of endless speculation, occurred at 11.30pm on 23 December 1888, at a brothel at 1 Rue du Bout d’Arles. Newspaper reports at the time named the woman as Rachel, possibly her nickname. Gauguin, who was then staying with Van Gogh in the Yellow House, fled from Arles on Christmas Day. 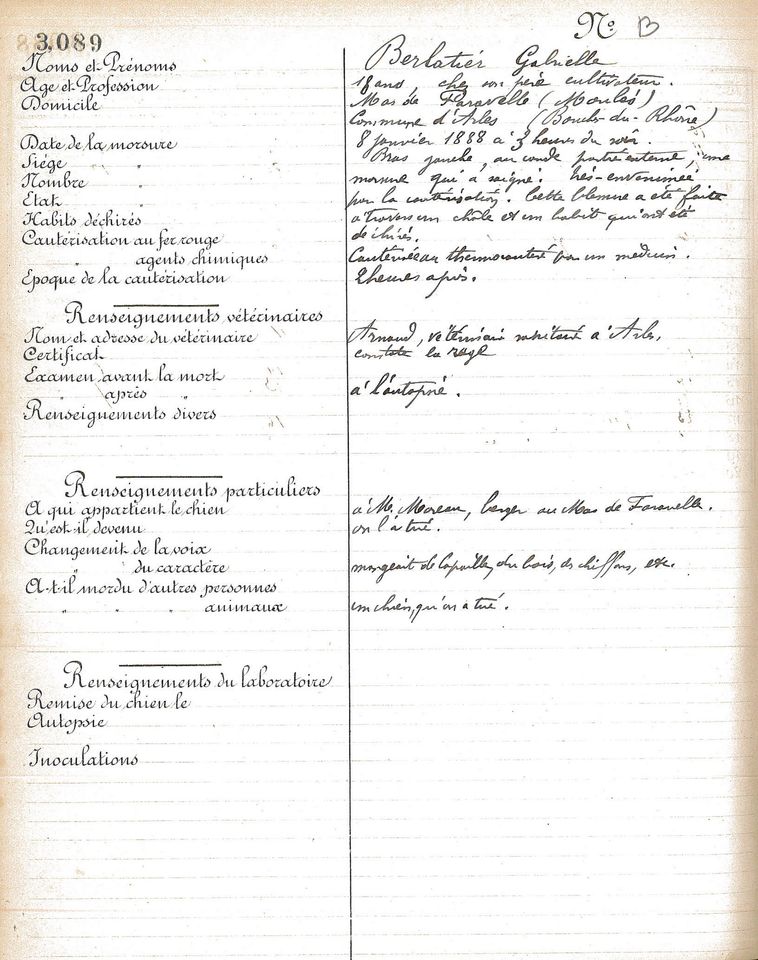 Murphy writes in her book that Gabrielle was too young to be a registered prostitute, and she was only working as a maid in the brothel. It does seem tragic that a teenager, traumatised after being bitten by a rabid dog and then suffering a very painful treatment, had to work in such an establishment at night. Gabrielle’s family, who had gone into debt over her medical expenses in Paris, must have been in desperate circumstances.

There is some evidence that suggests that Gabrielle at one time may have also worked as a cleaner at the Café de la Gare, which was run by Van Gogh’s friends Joseph and Marie Ginoux. The artist had a room and stayed there from May to September 1888, before he began to sleep at the Yellow House, just a few doors away.

The Café de la Gare was open all night, when it attracted a slightly seedy clientele. Three months before the ear incident Van Gogh completed a painting of its interior, called The Night Cafe, explaining that he had “tried to express the idea that the café is a place where you can ruin yourself, go mad, commit crimes”. He told his friend Emile Bernard that although not a brothel, the Café de la Gare was “a house of assignation, and from time to time you see a whore sitting there at a table with her fellow” (such a couple can be seen in his painting, at the back of the room).

Until now it has been assumed that the recipient of the ear had been a casual acquaintance of the artist, either a prostitute or the madame at the brothel at 1 Rue Bout d'Arles. The fact that Gabrielle Berlatier most likely knew the owners of the Café de la Gare raises the intriguing possibility that she was someone whom Van Gogh saw regularly.

Gabrielle, an innocent victim of a rabid dog and the temporarily deranged artist within the same year, later married and lived well into old age—keeping her traumatic encounter with Van Gogh a secret.

Martin Bailey is the author of “Studio of the South: Van Gogh in Provence”, to be published by Frances Lincoln in the autumn