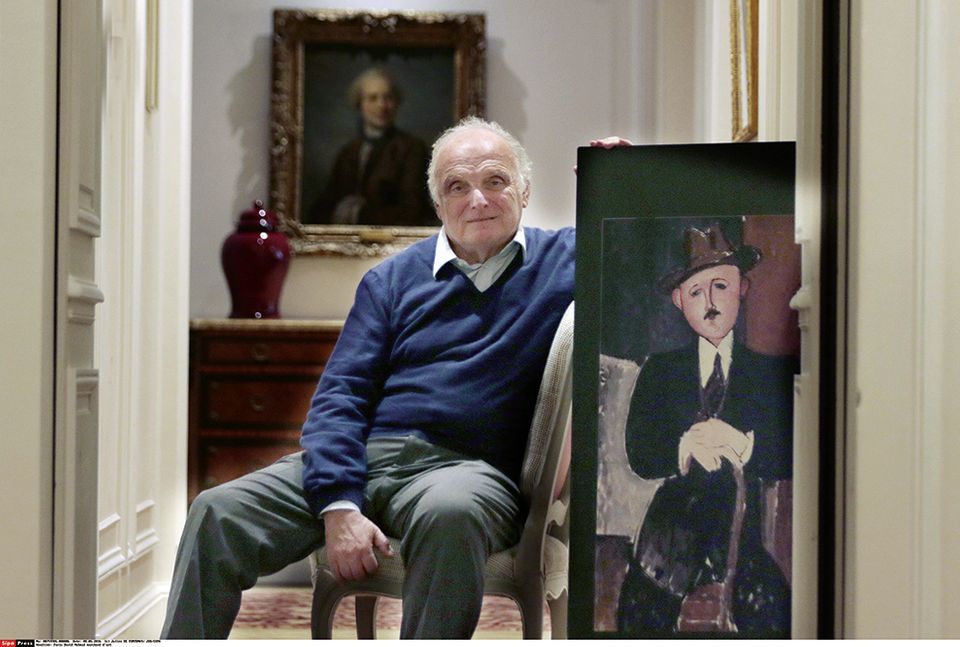 David Nahmad says that the painting he owns is different from the one that was seized by the Nazis after Oscar Stettiner fled Paris Photo: Julien de Fontenay/JDD/SIPA

Representatives of the art dealer Oscar Stettiner’s grandson say a document that has come to light in a Paris archive strengthens his long-running legal campaign to recover Amedeo Modigliani’s Seated Man with a Cane (1918), a painting they say was looted by the Nazis and is currently in the possession of the billionaire art dealer David Nahmad.

Estimated to be worth as much as $30m, the painting seized headlines in 2016 when the Panama Papers leak identified Monaco-based Nahmad as the sole proprietor of the holding company registered as its owner, International Art Center. Philippe Maestracci, a farmer who lives in France and is Stettiner’s grandson, first started legal action against the Nahmad family in 2011 to try to recover it.

Nahmad says that the painting in his possession, which he bought in 1996 at Christie’s for $3.2m, is a different Modigliani work to the one stolen from Stettiner during the Nazi occupation of Paris. But Mondex Corporation, a company founded by James Palmer that works on commission to help the heirs of victims of Nazi theft recover stolen property, says the document in the Wildenstein Institute archive in Paris adds to the evidence that it is the same work.

It was found in a file about the painting, which included a photocopied photograph of the portrait of a man in a suit, hat and tie seated with his hands folded over the handle of a cane. A handwritten note says, in French: “Modigliani. Stettiner family. Stolen. Sought in America,” according to a copy provided by Palmer. A further note says it was filed in April 1950. The existence of the document was revealed in the legal proceedings through the deposition of a former Sotheby’s employee, who had known of it since 2008, Palmer says.

“We are very pleased to have located this important new evidence, which further confirms that the Modigliani painting that was stolen from Oscar Stettiner is the exact same painting held by David Nahmad’s offshore company,” he says.

Stettiner was a Jewish art dealer who fled Paris before the Germans invaded, leaving his valuable art collection behind. His property was sold off by an administrator appointed by the Nazi occupiers. He tried to recover his lost Modigliani after the war.

A public investigator discovered that it had been purchased by a man named Jean Van der Klip in 1944 and Stettiner won a lawsuit that entitled him to regain possession of it. Confronted by a bailiff in 1947, Van der Klip claimed he had already sold it on to a buyer, who, in turn, said he had sold it to a US officer.

The alleged US buyer could not be traced, and Stettiner died in 1948 without seeing the painting again. It disappeared until 1996, when Seated Man with a Cane surfaced at the Christie’s auction in which it sold to Nahmad.

“It was never sold to an American officer,” says Phillip Landrigan, the lawyer representing Maestracci in the case at the New York State Supreme Court. Research by Mondex has shown that the consignors at the Christie’s auction were Van der Klip’s daughter and grandson. “They had waited 50 years, thinking they would be safe to sell it,” Landrigan says. “They each had a 50% interest in his estate and they shared the proceeds of the sale.”

The painting was again offered at auction in 2008 at Sotheby’s but did not sell—probably because of concerns about the gaps in provenance. After the Panama Papers revealed him as the holder of the work, Nahmad was quoted in an interview in the New York Times as saying that “if it’s proven that this painting is looted by the Nazis, I will give it back”.

Landrigan and Palmer say they hope the trail they have pieced together of the painting’s path will convince Nahmad to discuss a settlement before the case goes to trial. “If Mr. Nahmad is a man of his word, then he will now return this stolen painting,” Palmer says. “It would be a wonderful conclusion to this decades-long journey.”

Nahmad’s lawyer, however, dismisses the document. “Nobody knows who wrote it and nobody can authenticate it,” Aaron Richard Golub says. “It has no substance of any worth whatsoever.”