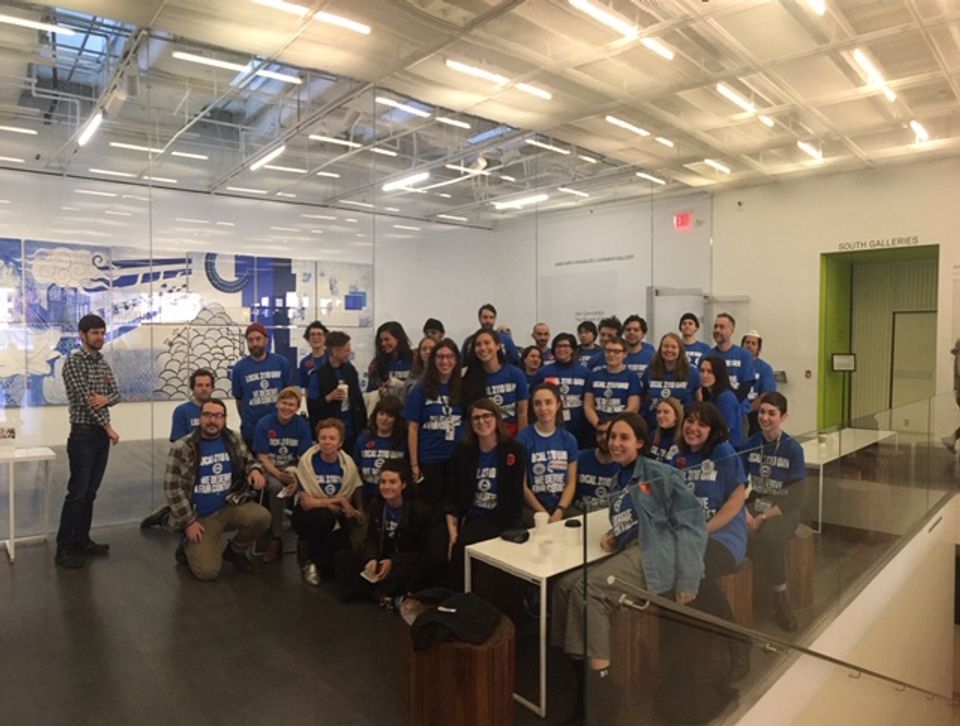 Around 45 staff members at the New Museum briefly gathered in the New York institution’s lobby this morning (11 January) at 11am, when the institution opens to the public, in support of a petition filed a week ago with the National Labor Relations Board to form the New Museum Union, NewMuU-UAW Local 2110.

The group’s first public collective action, today’s gathering “wasn’t a protest at all”, says Dana Kopel, the museum’s senior editor and publications coordinator, who participated in the event, which did not include signs or chanting, but staff members speaking together. “It was really just a little rally—a show of solidarity, an opportunity for all of us to just get together and to show ourselves and show the museum that we’re not just this little fringe group of anonymous people who want to form a union, but this is everybody—it’s people from across departments,” she says.

NewMuU-UAW Local 2110 initially planned to hold a staff vote on 17 January to officially form the union, but that might be delayed “given the pushback from management”, Kopel says, and the unresolved question of which staff members would be eligible to be in the bargaining unit. One of the major issues is that 11 staff members who Kopel says are not supervisors under National Labor Act standards are being claimed as such by the museum management “in order to keep people out of the bargaining unit and make it as small as possible”. (Those in supervisory roles, as well as confidential staff members such as executive assistants, are not eligible to join.)

Around 75 staff members would be in the bargaining unit if those members are able to join. The proposed union wants to include part-time as well as full-time staff members. Organisers have decided to exclude the security staff from the union, Kopel adds—she says there is a “bad precedent” in unions that include both security staff and other museum staff, because of such issues as the security staff’s responsibility to protect museum property in events such as strikes. Maintenance staff members also declined to join NewMuU-UAW Local 2110, she says.

This union is linked to the wider UAW (United Auto Workers) Local 2110 union, which represents staff members at other museums in the city including the Museum of Modern Art—where the union reached an agreement in September over pay and other contractual concerns.

The museum has the Kentucky-based labour-relations and anti-union services firm Adams Nash Haskell & Sheridan on retainer. (The firm’s site lists “counter union campaigns” among its “urgent services.”) NewMuU-UAW Local 2110 alleges in a statement that the New Museum “has mounted a harsh anti-union campaign”.

“This really does come out of our care for the museum,” Kopel says of the move to form a union. “We want to be able to stay and build careers and we want to make it possible for us to do that.”

The New Museum has declined to comment specifically on whether it has mounted campaign but sent a statement: “A group of employees recently petitioned to form a bargaining unit,” it says. “We want them to make a fully informed decision. In the meantime, we look forward to working with our staff to serve our audience and community.”

The union statement says that the museum’s organisational structure currently does not reflect the progressive nature of the institution. In its statement, the museum says: “The New Museum was founded as a flexible and experimental space for cutting edge artists and thinkers to express their views, including on the changing nature of museums. This mission has served as a bedrock tenet for the New Museum and guides our ongoing programme every day. Our employees make this work possible, and we hold them in the highest regard.”

“It was really moving just to come together for a few minutes” in today’s gathering, Kopel says. When taking group photographs at the event, “we said solidarity instead of cheese!”