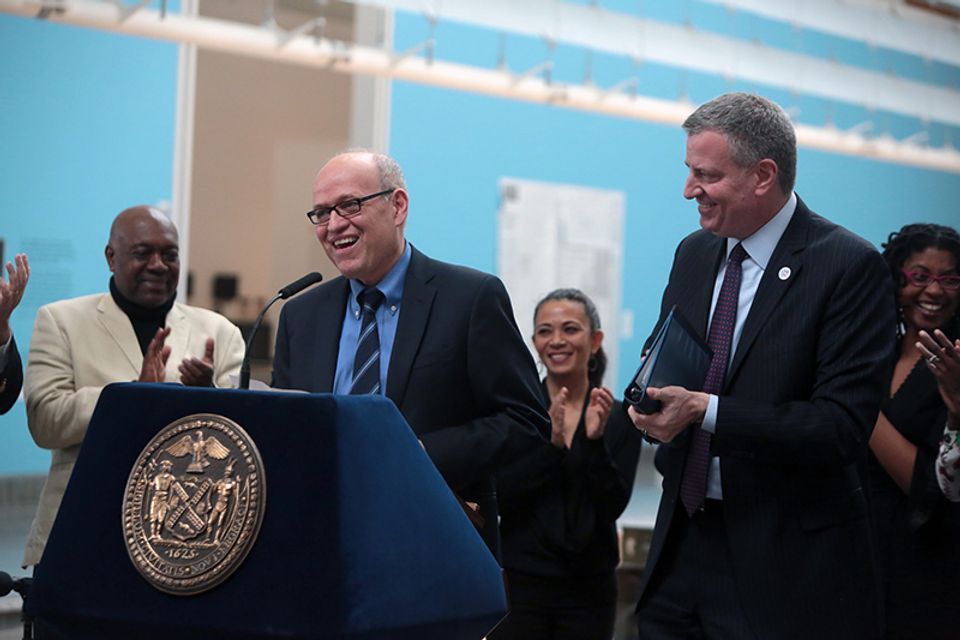 Tom Finkelpearl took over as commissioner Department of Cultural Affairs in 2014 NYC.gov

New York City’s top arts official, Tom Finkelpearl, has unexpectedly resigned as the commissioner Department of Cultural Affairs (DCLA), according to Mayor Bill de Blasio’s office. A specific reason was not given for his exit after nearly six years in the post.

“Tom has done a remarkable job in creating a more equitable and accessible cultural sector for all New Yorkers,” the mayor said in a statement. “He has touched the lives of millions of everyday New Yorkers with the joys of art, history and nature and I thank him for his dedicated service to the City.”

Finkelpearl has overseen one of the largest municipal investments in public art history. Last year, New York allocated nearly $200m toward its cultural budget, an unprecedented amount that included almost $44m for cultural programming across the five boroughs. At an August press conference, Finkelpearl said that the city has allocated more than $1bn for arts and culture since 2017.

Under his reign, DCLA embarked on several programmes to broaden arts access for residents through initiatives like IDNYC, an identification card that provides free membership to a number of institutions. The mayor’s administration also pledged to link future funding for cultural organisations to the diversity of their employees and boards. Finkelpearl has also been a staunch advocate for allocating more money and cultural projects to the city’s historically underserved areas.

“It’s been a pleasure and privilege to serve as Commissioner of the Department of Cultural Affairs since 2014. With my great colleagues at the agency, fellow commissioners across City government, and terrific support from the Mayor and the First Lady, we’ve been able to make record investments in our city’s cultural community,” Finkelpearl said in a statement. “I thank the Mayor and our partners in the City Council for their faith in this shared vision for our city. It has been deeply gratifying to witness and support the indispensable role that art and culture play in the lives of all New Yorkers.” Finkelpearl has not yet given word what he will do next.

Finkelpearl’s resignation comes at a moment of great scrutiny for the city’s cultural affairs department. He has weathered several controversies around the city’s public art commissions with some lawmakers, historians and activists saying that he overextended DCLA and obfuscated its selections process.

And his good-faith efforts to diversify the city’s predominantly white-male statuary has not gone smoothly. Last month, for example, a community meeting to vote on the replacement of a monument to J. Marion Sims, a 19th-century physician who performed medical experiments on enslaved black women without anesthesia, went awry with audience members shouting “How dare you!” after a panel voted in favour of the artist Simone Leigh. Community organisers, who largely supported another proposal by the artist Vinnie Bagwell, said they were led to believe that they would have a final vote in the decision. The jury panelists meanwhile said they only learned that their roles were advisory after Finkelpearl announced that fact in an effort to calm the distraught crowd. Leigh eventually pulled out of the competition and Bagwell was chosen to design the monument.

Before ascending to the city’s highest arts office, Finkelpearl served as the director at the Queens Museum, where he oversaw a $68m renovation. During the 1990s, he was director of the city’s Percent for Art programme under the DLCA, which is responsible for much of New York’s public art: by law, 1% of the budget for eligible city-funded construction projects must be spent on art installed in city facilities. Currently, there are 125 active commissions through the programme.