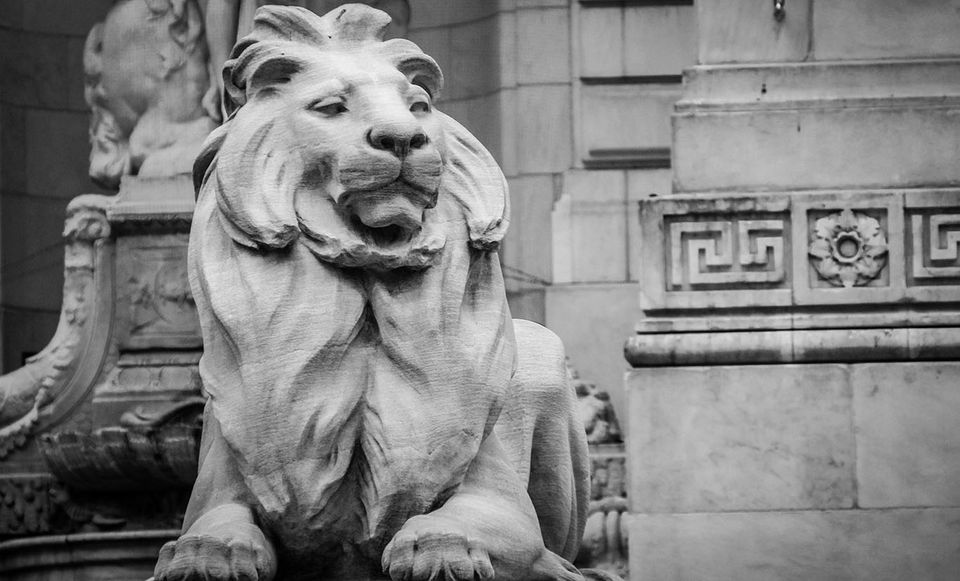 The New York Public Library is embarking on a $250,000 effort to clean and conserve the noble pair of marble lions that have graced the Fifth Avenue entrance of its Beaux-Arts flagship building since 1911.

To finance the project, the library appealed to readers across the city for donations in a “Restore the Roar” campaign, and hundreds responded, the institution says. The effort is also being underwritten by a grant from the New York Life Foundation. The library declined to give a precise figure on the grant or local contributions.

The lion mascots have been known as Patience and Fortitude since the Great Depression of the 1930s, when Mayor Fiorello LaGuardia bestowed those names because he felt that New Yorkers needed those qualities to weather economic hard times, the library says.

Garrett Bergen, the library's associate director of facilities management, said that work would begin the first week of September and continue until the end of October. Each sculpture, carved from Tennessee pink marble, will be surrounded by a plywood enclosure and undergo a laser cleaning by conservators, he says. Cracks will be filled in on both lions, he adds, and each will undergo Dutchman repairs identified by engineers in which small sections are replaced by the same material. “The appearance of the lions should not change dramatically,” he says.

Work is also underway in the Stephen A. Schwarzman Building, as the flagship building at Fifth Avenue and 42nd Street is known. The library is restoring three ornamental plaster ceilings that had been painted over in solid colours, rendering highlights and detail invisible. Each is being restored to its original appearance in a $800,000 effort. The library says the restoration of one on the third floor was completed on 27 June and the other two, above central staircases leading to the library’s McGraw Rotunda, are due to be completed by 30 September.

Most famously, the library undertook a two-year $12m restoration of the ceilings of its renowned Rose Main Reading Room and Bill Blass Public Catalog Room in 2014 after a plaster rosette fell from a ceiling, leading to the temporary closing of both spaces.

The lion sculptures, battered by rain, snow, wind and exhaust from cars and buses, were last cleaned and repaired in 2011. “The lions have earned some time at the spa,” the library’s president, Anthony W. Marx, said in a statement. “They are the true kings of this city, beloved by all.”