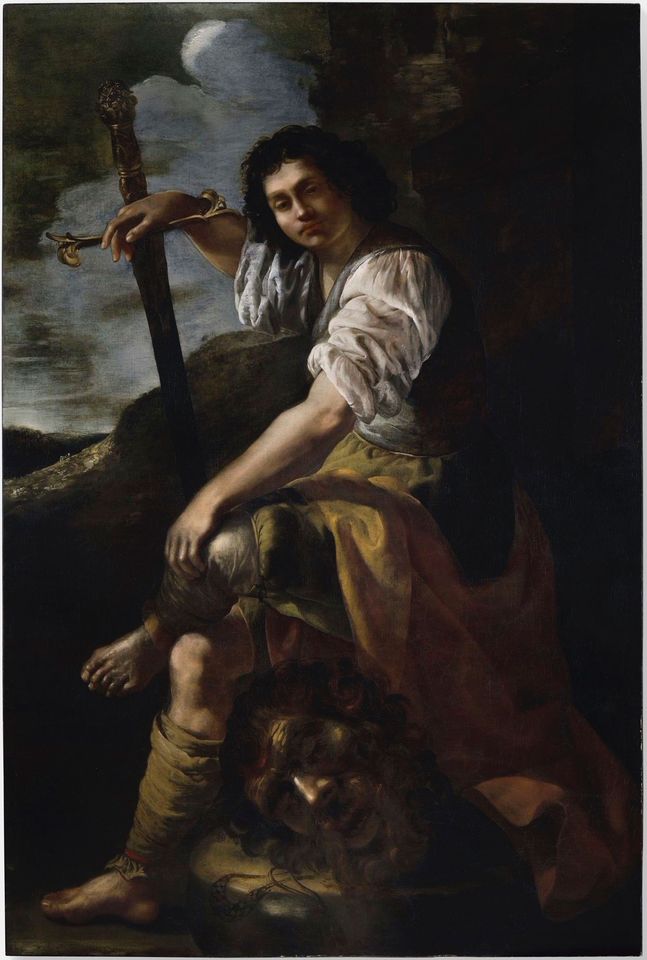 The newly attributed painting of David and Goliath, dated to the late 1630s, has been unveiled in London after restoration Photo: courtesy of Simon Gillespie Studio

Ahead of the first major UK exhibition of the work of Artemisia Gentileschi, a London conservation studio has unveiled a painting newly attributed to this best-known female artist of the Italian Baroque.

The large oil on canvas depicts David and Goliath, a favourite Biblical subject for both Artemisia (1593-around 1654) and her father, Orazio Gentileschi (1563-1639). When the work was sold at Sotheby’s in 1975, it was attributed to Giovanni Francesco Guerrieri (1589-1655), a student of Orazio. However, by the time it resurfaced in 2018 at Hampel Fine Art Auctions in Munich, Artemisia had entered the art historical canon, and the work came under scrutiny from scholars and dealers. It was reattributed at the eleventh hour to Artemisia, selling for €104,000 to a UK-based collector who wishes to remain anonymous.

He engaged the private conservator Simon Gillespie to restore the painting in London—the city in which the work is thought to have been painted in the late 1630s. After periods working in Rome, Florence, Venice and Naples, Artemisia stayed in the English capital in 1639, possibly assisting her elderly father to complete a series of allegorical ceiling paintings for the Queen’s House in Greenwich (later moved to Marlborough House).

Gillespie and the Italian scholar Gianni Papi, a Caravaggio and Gentileschi specialist, back the new attribution of David and Goliath to Artemisia in the latest issue of the Burlington Magazine. As long ago as 1996, Papi writes, he thought the painting “seemed characteristic of Gentileschi in its atmosphere and especially in the sinuous figure of David”, based on the single black-and-white photograph available at the time.

Now, having studied the work in the conservation studio, Papi says cleaning has revealed an original colour palette consistent with Artemisia’s work, for example in the brightened sky and David’s golden ochre cloak. Other details that suggest her hand include David’s sleeve, the play of light across his face and the barren landscape. Papi identifies the work with an 18th-century account by the art historian and politician Horace Walpole, who wrote: “King Charles [I of England] had several of [Artemisia Gentileschi’s] works. Her best was David with the head of Goliath.”

Gillespie’s restoration also uncovered the faint signature “Artemisia” along the blade of David’s sword. The inscription includes the digits “16-”, presumably the traces of a date that can no longer be read, Gillespie writes in his technical report for the magazine. The discovery is “confirmation of the painting’s autograph status”, according to Papi. 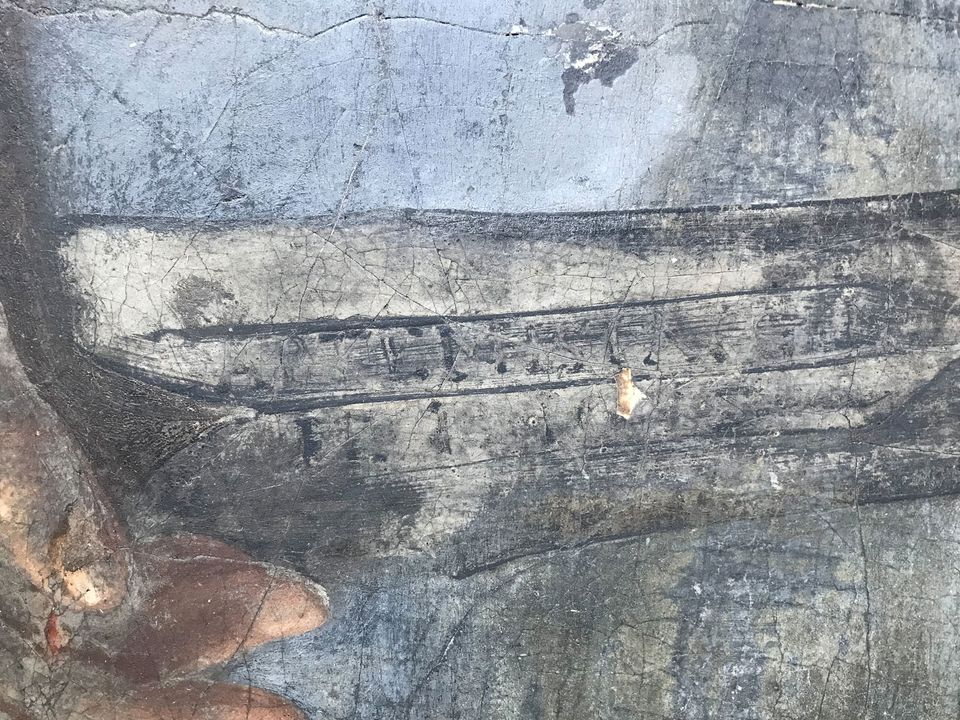 The cleaning process uncovered the faint signature "Artemisia" along the blade of David's sword Photo: courtesy of Simon Gillespie Studio

“It’s a genius piece,” Gillespie tells The Art Newspaper. “This was my first time working on a painting by her, and it has opened my eyes to the character of the woman. She’s got an extraordinary sense of narrative.”

Although David and Goliath will not be included, the National Gallery’s forthcoming Artemisia exhibition (4 April-26 July) promises to bring that sense of narrative to the fore. “Artemisia Gentileschi is a brilliant storyteller who spares us none of the gore,” says the show’s curator, Letizia Treves. She describes Judith Beheading Holofernes (around 1613-14) from the Uffizi Galleries in Florence as a star loan. “Here [Artemisia] is imagining, as a woman, what it would take to decapitate a muscular man. You see the determination and resolve in [Judith’s] face. There’s a real grittiness to the painting.” 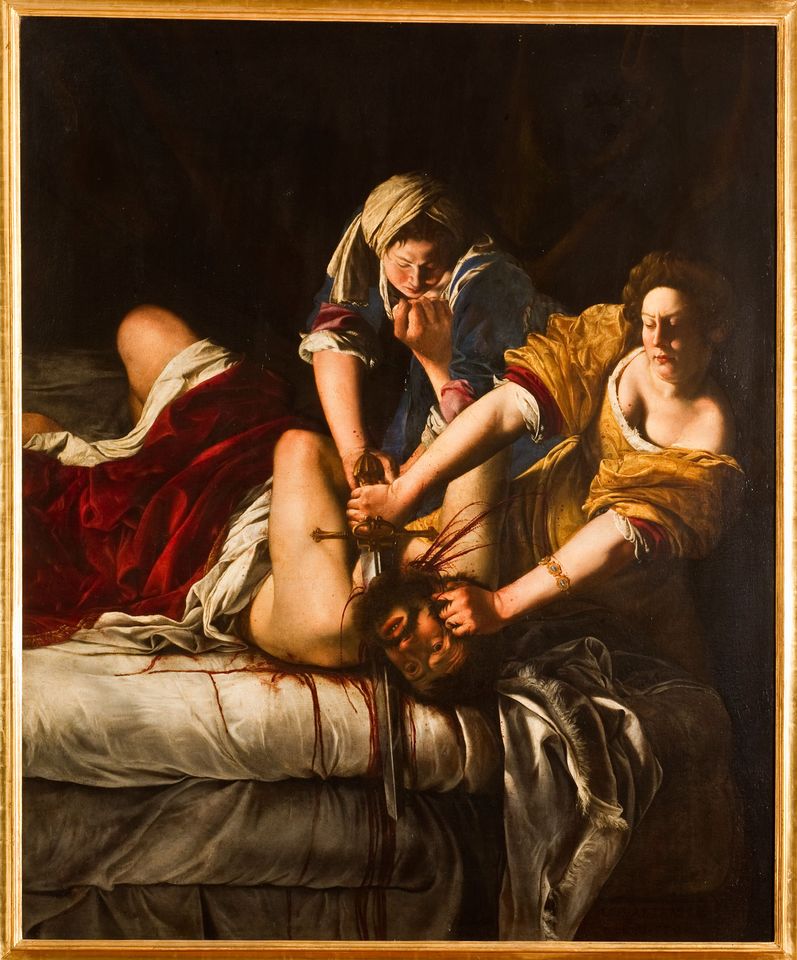 Artemisia Gentileschi's Judith Beheading Holofernes (around 1613-14) will be a star loan of the National Gallery exhibition, from the Uffizi Galleries in Florence Photo © Gabinetto fotografico delle Gallerie degli Uffizi

Such images of strong, vengeful women have often been read in the light of Artemisia’s own biography, which has contemporary resonances in the age of #MeToo. Aged 17 and already an accomplished painter, Artemisia was raped by an artist acquaintance of her father, Agostino Tassi, who was later tried and found guilty. Artemisia was tortured in court to prove her testimony was true. After a gruelling and high-profile trial, she was hastily married off and moved to Florence, where the “shameful” story would be less well known.

The tables were turned in Gentileschi’s work. According to a new biography by the Guardian newspaper’s art critic Jonathan Jones, she was “the most radical of [Caravaggio’s] followers… building brilliantly on his revelation that art and life are doubles of each other”. 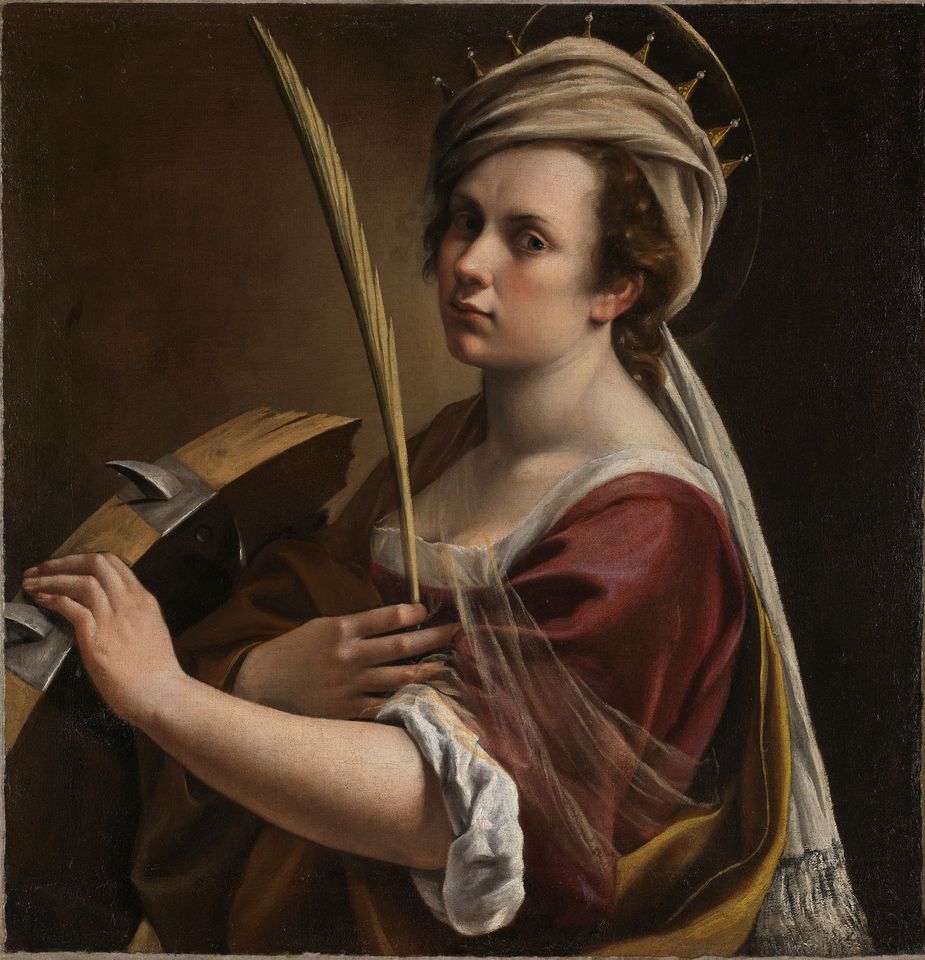 The odds were stacked against 17th-century female painters, but Artemisia was no second best. She had a talent for capturing the emotions of her subjects in the moment, in paintings such as Madonna and Child (around 1613-14) in the Galleria Spada in Rome, which is also travelling to the National Gallery show. A mother herself to several children (most of whom did not survive), Artemisia depicted the Virgin Mary with eyes closed, seemingly exhausted by her energetic toddler.

Also on display will be recently discovered letters in which Artemisia reveals her passion for her lover Francesco Maria Maringhi. In one, she writes of “the great desire I have to see you”, while in another she reminds him that “I love your soul as much as your body”. 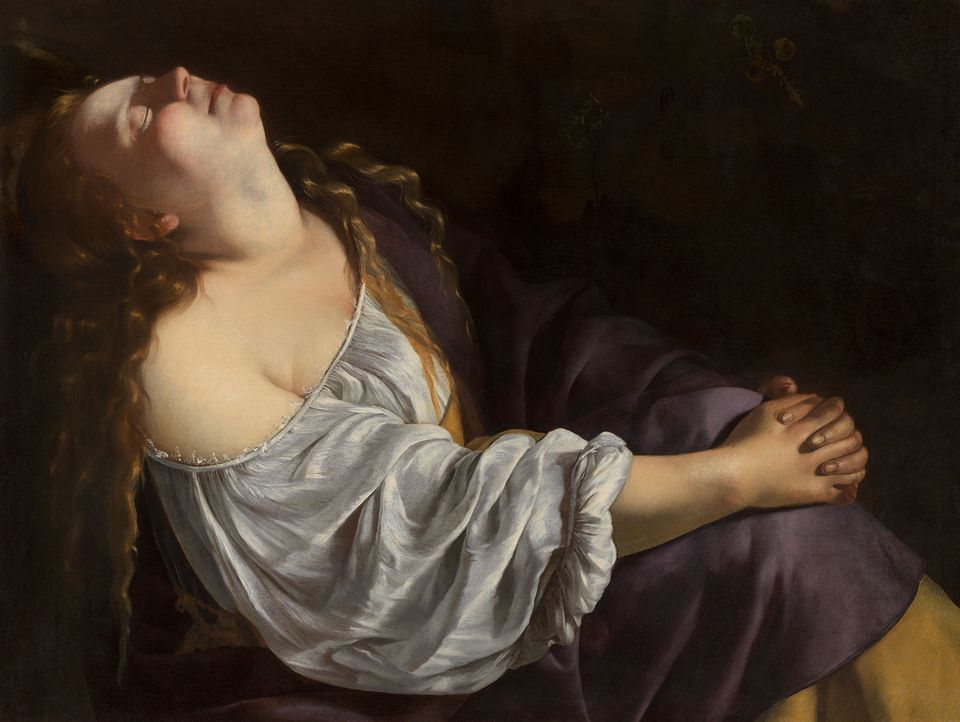 More than 350 years after her death, the National Gallery show looks set to catapult Artemisia further into the public imagination—and intensify the search for fresh discoveries. According to Treves, around 65 works worldwide are currently accepted as autograph Artemisias, with another 120 identified with her but contested. “Many more are lost,” Treves says.

The artist’s market reached new heights last November, when another take on Lucretia (not included in the National Gallery show) set an auction record of €4.8m at Artcurial in Paris. Yet one month later, Sotheby’s in London sold a female martyr painting, probably Saint Catherine of Alexandria, for the relatively modest £187,500. The painting has now been announced as a new acquisition for Sweden’s Nationalmuseum, where it went on view earlier this week.

Whatever the price point, it seems almost certain that there will be more finds in the years ahead.