Located on England’s south coast, the independent charity is collaborating with commercial galleries to mount exhibitions 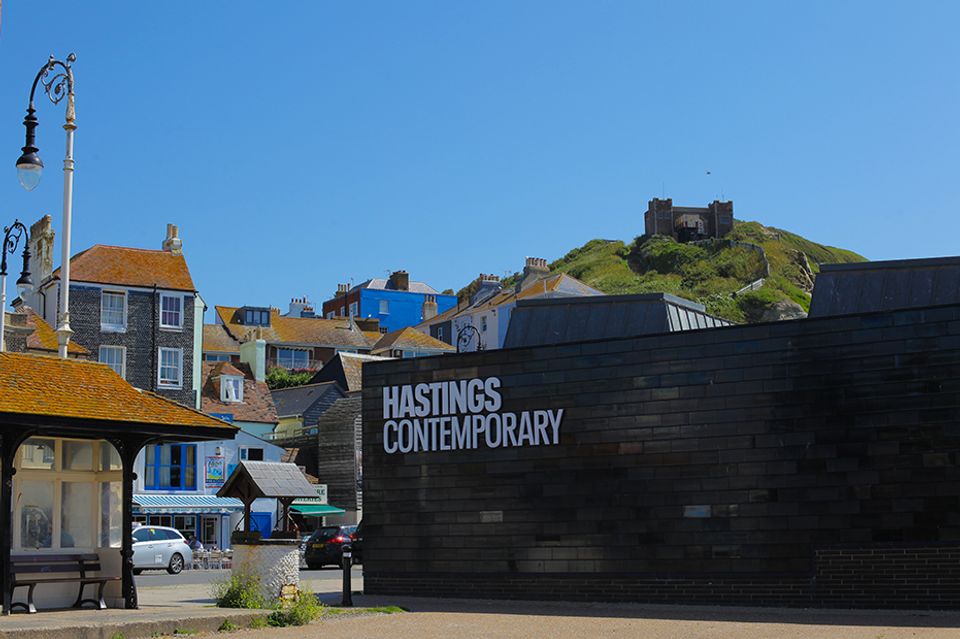 Billed as “a new, independent art gallery”, Hastings Contemporary opened on 6 July in what UK government data has identified as the most economically deprived town on England’s south coast. A fresh logo has appeared on the distinctive black-tiled seafront building that, since its foundation in 2012, has been known as the Jerwood Gallery.

Formerly the showcase for a representative, if less than stellar, private collection of modern British art owned by the philanthropic Jerwood Foundation, the building is now hosting a show of paintings, sculptures and works on paper by the Israeli-born Danish artist Tal R.

“The gallery is creating a more international programme,” said Nick Maclean, a co-partner in the London and New York-based art dealership Eykyn Maclean, who is a trustee of Hastings Contemporary. “Tal R is an international name, but his work is accessible.”

This has been a challenging year for the town’s flagship visual art venue. In February, following a dispute over funding, the Jerwood Foundation announced that it would be withdrawing its collection and financial support, leaving the gallery, which is still owned by the foundation, to reinvent itself under the guidance of its director, Liz Gilmore.

Gilmore is keen to exploit the gallery’s status as an independent charity, to which it converted in 2017. “It opens up greater sources of funding,” she says, identifying at least 11 different income streams that cover the £500,000-£600,000 annual running cost of Hastings Contemporary.

The venture has been helped on its way by an anonymous £250,000 donation. In 2017, the gallery was awarded a grant of £400,000 from Arts Council England over four years, and Hastings Borough Council offers a further £30,000 of annual funding.

According to Gilmore, around a third of the gallery’s income is generated by ticket sales. Unlike the more lavishly publicised and funded Turner Contemporary in Margate, which has free admission, Hastings Contemporary charges up to £9 for adults. Gilmore says that 300,000 people had bought tickets over the last seven years, but “visitor numbers would be huge if we were free”. In 2018, Turner Contemporary reported visitor figures of 400,000.

Gilmore is keen to take a more enterprising approach to Hasting Contemporary. The future of institutions such as Hastings will have “to rely less on core funding and be more entrepreneurial”, she says, adding that this “multifaceted approach” included commercial galleries, who have been “particularly responsive to our new format.”

Indeed, many dealers have contributed to the institution’s inaugural exhibitions. Tal R is represented by the international dealer Victoria Miro, and several of the works currently on view feature on the dealer’s website. A presentation of works by the British painter Roy Oxlade, who died in 2014, comes courtesy of Alison Jacques gallery in London, and five David Bomberg pieces are on loan from the private collection of the London dealer Daniel Katz.

Though Gilmore declined to be drawn on whether such collaborations might compromise the independence of a public gallery, it certainly helps to secure its future. Nicholas Serota, the chair of Arts Council England said, speaking on 2 July at the reception to celebrate the opening of Hastings Contemporary: “Jerwood has let go [of funding the gallery]. It’s not that worrying.”

That may be the case. But, as Hastings Contemporary has shown, Britain’s regional galleries are having to come up with ever more creative ways of adapting to these uncertain times.