Hirst launches the Palm platform with a drop of 10,000 works on paper linked to NFTs that “explore the boundaries of art and currency” 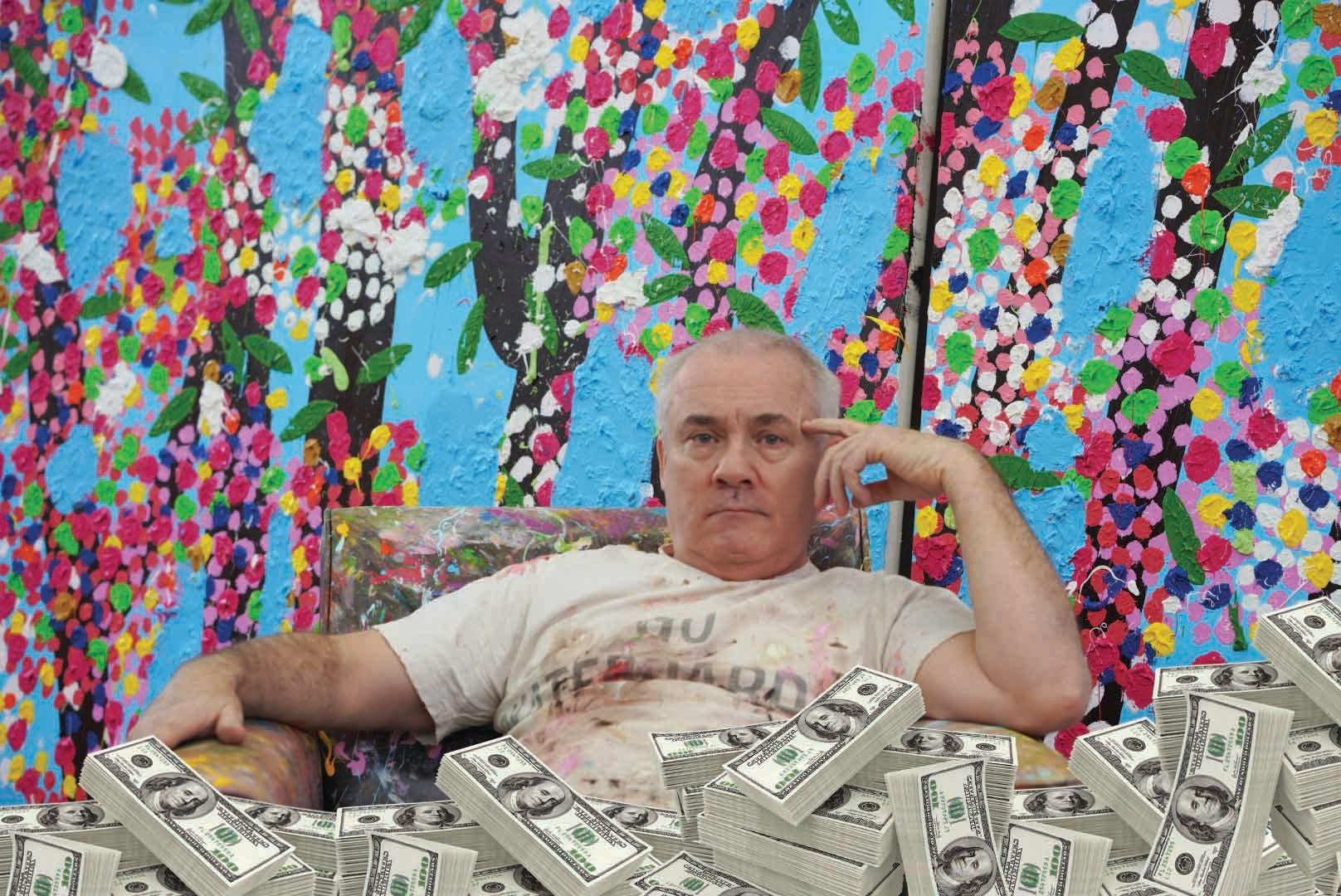 It is no secret: NFTs are helping to destroy our planet. That Beeple sale not only racked up $69.3m, it also generated an eye-watering 78,597kg of CO₂ emissions—the same amount of electricity used by more than 13 homes in an entire year.

But today, perhaps a solution is in sight.

A group of some of the biggest players in blockchain, including Ethereum and ConsenSys co-founder Joe Lubin, have announced the launch of Palm, an alternative network for NFTs that is 99% more energy efficient than the current Ethereum blockchain. The other co-founders are Joe Hage, the owner of Heni Publishing, and David Heyman, the founder of Heyday Films who produced the Harry Potter movies.

It is not the wholesale switch from Ethereum to Ethereum 2.0 (Eth2) that has been long-promised and would drastically reduce the energy consumption of the network, nor is Palm the first platform to use other, more energy efficient blockchains, but it is a huge stride from some of the leading figures in the field.

Dan Heyman, the co-founder and chief executive of Palm, tells The Art Newspaper: “We are trying to enable the best set of trade-offs for creators and curators in the NFT space in the short term, while Eth2 rolls out, but in the long-term we really want to be a home for creators as a complement to Ethereum.”

Heyman estimates Ethereum’s upgrade from Proof of Work, which is 99% more wasteful, to a Proof of Stake consensus mechanism will happen within a year. “The next big milestone will be in six months,” he adds. Palm, meanwhile, is using the more centralised Proof of Authority algorithm, which Heyman says will convert into a decentralised system over time.

Damien Hirst will launch the Palm platform with The Currency Project, a series of 10,000 unique oil paintings on paper created five years ago tied to corresponding NFTs. “They are in a vault but about to come to life through their launch on the blockchain,” Hirst told FAD Magazine earlier this month. Buyers of his cherry blossom print run, for which Hirst accepted cryptocurrency, were also given the option to store them in the Heni Vault, a bonded fine art store in the UK.

The Currency Project is a play on the idea of ownership, as well as the cult of wealth—two concepts the artist who brought us the diamond-encrusted skull, For the Love of God, is well-versed in. How the project will be priced is, for now, undisclosed.

Hirst tells The Art Newspaper: “This project is firstly about art and people but it explores belief and value generally, and in particular value in art. It also touches on the idea of art as a currency and a store of wealth. Art doesn’t have to just exist in the physical world, it can also exist in the digital world too and now because of the blockchain so can the ownership of that art.”

Hirst points out this isn’t a new idea. “Conceptual artists in the 1960s and 1970s said art doesn’t exist in the art object, it exists in the mind of the viewer, and this project isn’t any different,” he says. “This project explores the boundaries of art and currency—when art changes and becomes a currency, and when currency becomes art. It’s not a coincidence that governments use art on coins and notes. They do this to help us believe in money. Without art, it’s hard for us to believe in anything.”

Of course, if Hirst dropped 10,000 NFTs on another Ethereum-based site, the ecological cost would be catastrophic—as would the press coverage. According to the artist and computer scientist Memo Akten, who has undertaken crucial research into the environmental impact of the crypto art industry, one NFT (minted on Super Rare) is equal to around 211 kg of CO₂. That means Hirst’s project would have generated more than 2m kg of CO₂, the equivalent of 432 cars being driven for a year.

The musician and artist Grimes felt the backlash after she sold 303 editions for $6m on Nifty Gateway last month, producing 70 tonnes of CO₂ emissions and using the same electrical power as the average EU resident would in 33 years. Nifty Gateway said that an undisclosed percentage of Grimes’ sales would go to Carbon180, a non-profit focused on removing carbon from the atmosphere.

According to research by the media artist Kyle McDonald, Nifty Gateway is ranked the second most polluting platform after OpenSea. Rarible is third, while Makersplace and SuperRare are fourth and fifth.

Nifty Gateway has attempted to offset its consumption, recently hosting the Carbon Drop auction, which raised more than $6.5m—with over $1m of that going to support the Open Earth Foundation. Earlier today, the Winklevoss-owned NFT marketplace announced plans to go carbon neutral through dedicated carbon offsets at the end of each month.

However, offsetting carbon emissions is widely believed to be ineffective, unlike carbon sequestration which is known to reverse global warming. Last week the artist John Gerrard released his first NFT, described as “superneutral” for its its lack of carbon footprint. Proceeds from its sale will go to Gerrard’s emergency Ethereum cryptofund, regenerate.farm, which focuses on soil restoration and soil regeneration in his native Ireland.

Meanwhile, the climate artist and activist Joanie Lemercier withdrew from the Carbon Drop auction after requests by the participating artists for Nifty Gateway to temporarily suspend the sale of open editions were ignored. Open editions are considered the most damaging to the environment, given that they can be infinitely produced and sold.

“The platform failed the artists,” Lemercier says. “I’ve tried to push them, but they have no interest in reducing their impact at all.”

Lemercier believes the main NFT marketplaces are reluctant to invest in the transition to Proof of Stake or adopt the scaling solution—as Palm has—because the boom may soon be over. He says: “The underlying narrative is that they won’t spend any time on scaling because the bubble is going to burst anyway.”

In addition to the Carbon Drop auction, the platform “is exploring our own pathway to achieve a carbon negative footprint”. The spokeswoman adds: “In general, trading and keeping artwork on Nifty Gateway does not consume block space. Block space is consumed when artists’ works are minted into the Ethereum network. As such, we are also adjusting our own minting process to make the minting of NFTs on Nifty Gateway more efficient.”

It could be too little, too late. Lemercier says artists are already leaving the big sites for smaller green networks such as Harmony, which has a new NFT platform called Da Vinci, Cardano and Hic et Nunc. He notes that the number of works being minted on Hic et Nunc has jumped from 300 to 15,000 in around two weeks.

“The first platforms to solve this issue will lead the community, and drive artists and collectors away from the irresponsible, non-ethical ones,” Lemercier says, adding that he and 30 other artists are planning a big drop on another Proof of Stake network in the next few weeks.

Heyman says the aim for Palm is for some of the bigger NFT platforms to run on its side chain as well as on Ethereum. “Artists will then be able to decide which of the chains they they want to use,” he says, noting that Palm is 100% compatible and anchored in Ethereum. The platform has its own token, $Palm, though whether that will become a currency is not yet clear. “There will be multiple forms of payment on Palm,” Heyman says.

Palm’s NFT studio is likely to be an additional lure for artists in need of help developing their NFT strategies. “Sometimes that means building a marketplace for those projects, sometimes it means finding the right partner marketplace to do projects through,” Heyman says. “Usually what it means is designing some sort of custom drop mechanism, as a way to engage audiences in the first instance. Secondary markets would then happen on other marketplaces.”

Meanwhile, Palm intends to fix its gas fees, paid by artists to offset energy costs, at an ultra low level. “It won’t be free, because there needs to be some element of gas,” Heyman says. “But it will be super, super cheap in comparison to current Ethereum gas prices.”

Nonetheless, it will take an industry-wide shift to reverse the damage being done by NFTs. Only then will the “artist creates NFT to offset the environmental damage caused by creating an NFT” conundrum be solved.