Norman Foster unites his archives and art under one roof

The British-born, Pritzker prize winning architect, Norman Foster, opens his archive and an international research centre on Thursday, 1 June, housed in a palatial building in Madrid. The new Spanish headquarters of the Norman Foster Foundation is a historic building that has been restored and expanded by the architect. He has designed a glass and steel “pavilion of inspiration” in the courtyard, leading to a basement filled with his archive, library plus photography and slide collection. The sleek new structure is shaded by sculptural canopy created by the Spanish artist Cristina Iglesias in collaboration with the architect. 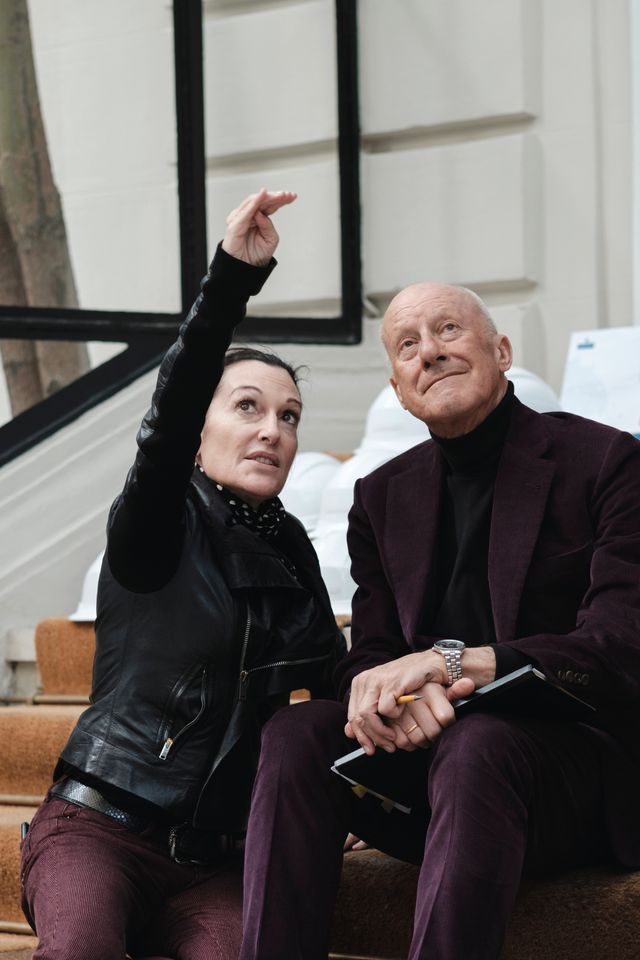 Among the hundreds of his architectural drawings as well as detailed models of Foster + Partners’ work on show, are works of art drawn from the architect’s collection and that of his Spanish-born wife, Elena Ochoa Foster, the founder of art publisher Ivory Press. For example, a large-scale model of Foster + Partner’s Beijing airport terminal hangs on the wall of the grand staircase alongside a sculpture by Brancusi and a Chinese figure by Juan Muñoz. On a meeting table sits a large, wooden hexagonal sculpture by Ai Weiwei, a gift of the Chinese artist and architect.

But the first work of art visitors find as they enter the building, which was designed as a town house for a Spanish aristocrat in 1902 and used variously as the Turkish embassy and bank headquarters, is a large reclining figure by Henry Moore. Foster revealed how he came up with the idea of creating a full-size plywood cut-out of another reclining figure by Moore to help position it in the landscape at the Sainsbury Centre at the University of East Anglia. Foster’s landmark gallery for the collection of Robert and Lisa Sainsbury and home for the university’s school of world arts, helped launch his international career when completed in 1978.

“You can’t get a group of people to lift the reclining figure up and move it. But we were just able to lift up the plywood profile and move it around. Moore came for that. So Moore just placed it in the landscape. No-body had thought about a plywood cut-out.” Foster’s innovative use of materials has rubbed off on Iglesias, who has used carbon fibre for the first time to create her sculptural installation suspended over the entrance courtyard. Foster recalled quizzing Moore about colours in the landscape. “He was terrific. He said that if you want something to recede, use a dark colour, like the colour of the trunk of a tree. I’ve applied that lesson as an architect,” Foster says.

The one-day, inaugural conference in Madrid on Thursday will include invited speakers ranging from the artists Olafur Eliasson, Cornelia Parker and Maya Lin, to fellow Pritzker-winning architect, Alejandro Aravena and Michael Bloomberg, the philanthropist, businessman and former mayor of New York.

One of the aims of the foundation is to support interdisciplinary research and collaboration as well as help young architects and engineers at a formative stage in their careers. “I realise that I have spent my whole life going against the system,” Foster says, recalling how when at the University of Manchester he took “a huge risk as a student”. Architecture students had to do a measured drawing in the summer. Some of his are on show, including a detailed, cross-section of a Cambridgeshire windmill. “You were supposed to measure ‘architecture’. So everyone measured Georgian houses. I did barns, windmills,” he says. “The only reason I did not fail was that I won prizes at the RIBA [in London]. Manchester could not criticise me because I had been ennobled.” London’s Royal Institute of British Architects’ £100 prize enabled Foster to pay his fees as well as travel.  “It was a lot of money in the 1950s, worth thousands today.”