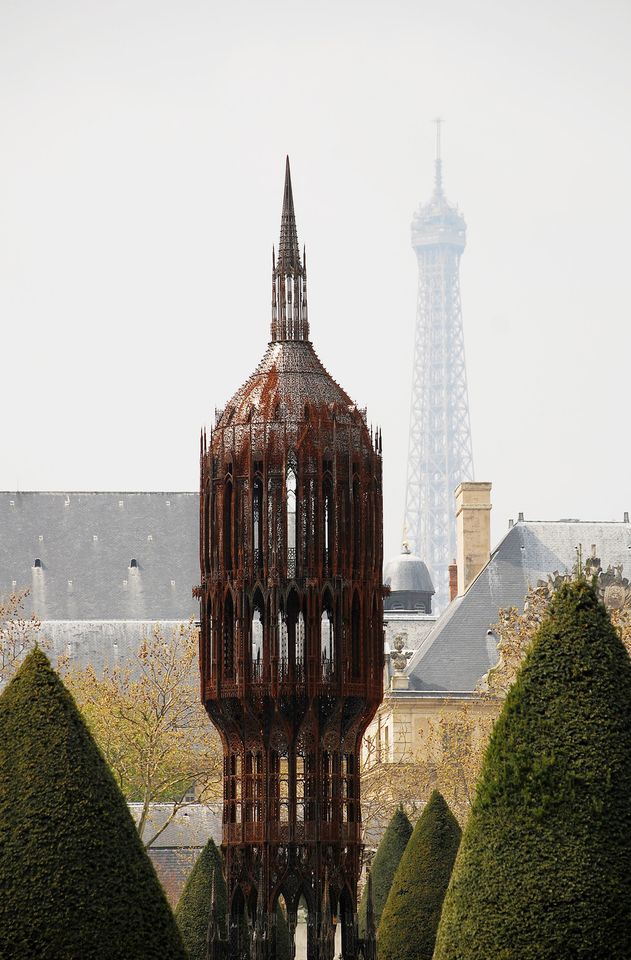 Wim Delvoye's Tour (Rodin, 2010) at the Musée Rodin in Paris in 2010 Courtesy of Wim Delvoye Studio

The Belgian artist Wim Delvoye says that officials at Notre Dame cathedral, which was destroyed in a fire in April last year, have so far snubbed his proposal to rebuild the spire of the gutted medieval landmark. “The longer the French wait to decide—or to start a competition—the more they will need to rely on my technique and design [involving] laser-cut Corten steel,” he says. “They are going to discuss [the spire design] for ten years.”

The 93-metre spire, which collapsed in the devastating fire, was erected in the 1860s when the cathedral was dramatically reshaped by the architect Eugène-Emmanuel Viollet-le-Duc. Last year, Delvoye announced plans to take part in the international competition for the reconstruction of Notre Dame announced by Edouard Philippe, the prime minister of France. The National Commission for Architecture and Heritage is due to give its recommendations relating to the spire to the Ministry of Culture later this year. The Art Newspaper understands that a decision on the final design will subsequently be made next year.

The debate about the kind of spire needed is intensifying. Soon after the fire, the Elysée Palace said in a statement that “since the spire wasn’t part of the original cathedral, the President of the Republic [Emmanuel Macron] hopes there will be some reflection and a contemporary architectural gesture might be envisaged.”

But according to the conservation principles endorsed by Unesco and Icomos, the spire should be rebuilt according to traditional techniques and should reinstate the shape and character of the previous spire.

Delvoye is known for his laser-cut stainless steel works, creating trucks, concrete mixers and towers in a neo-Gothic style. In 2012, he unveiled a corkscrew-like tower at the Louvre called Suppo which was inspired by Flemish Gothic architecture. He says that his design for Notre Dame will be “faster—ready in less than two years—and fireproof”, adding that “Notre Dame survived the French Revolution, and other revolutions, then two World Wars… now Notre Dame is just a symbol of Europe’s rapid decay.”

Officials in the municipality of Chimay, south Belgium, have meanwhile asked Delvoye to convert a derelict building into an art centre. “I got the house from the government in Chimay for a symbolic [nominal] sum of money. The people of Chimay hope I will do something like an art centre. The building is very big and they don’t have money to restore it,” he says. “In Chimay, I hope to show other artists’ works because I need my own work for exhibitions.” Delvoye hopes to renovate and relaunch the space within the next two years.