This unique paper negative is the very sheet that Nègre, a painter turned photographic pioneer in the 1840s, exposed in his camera and initialled in ink on the verso. Compared with a transparent negative, it can be difficult to capture sharp detail with a paper negative, and the uncommon degree of texture—seen here in the knobby cobblestones and filigreed trees across the riverbank—is a testament to Nègre’s hard-won skill. Prints produced from this shot are held by the Musée d’Orsay, the Metropolitan Museum of Art and the National Gallery of Canada. Artists’ fascination with negatives and alternative processing continued into the 20th century with works by Laszlo Moholy-Nagy and Robert Heinecken—also among the gems in this sale of photographs from the collection of the late Howard Stein. 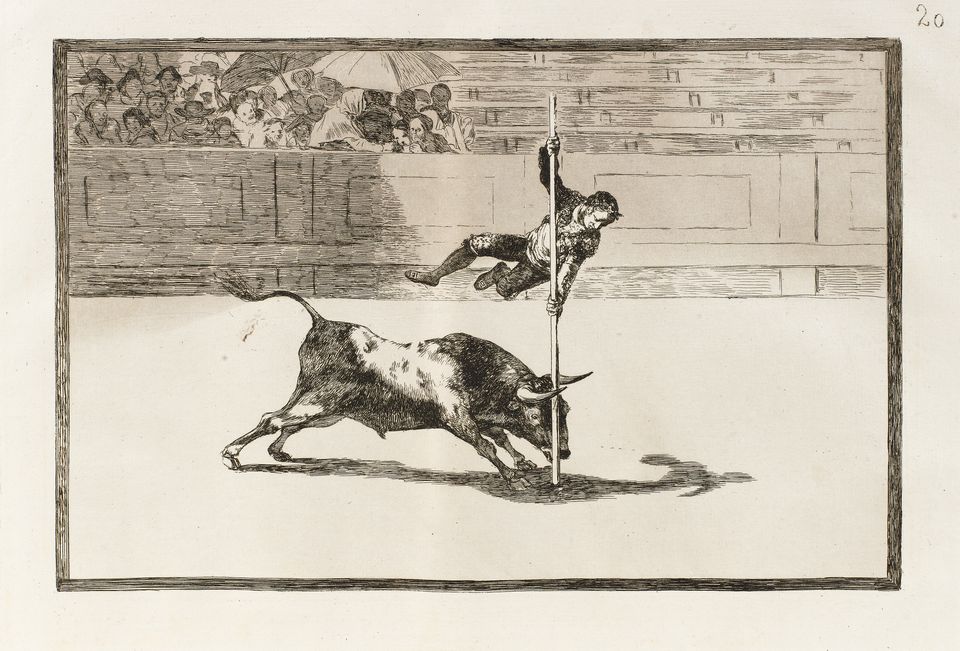 Goya’s bullfight engravings are among his most sought-after works, and this complete first edition set of 33 prints is among the rarest. Etched and aquatinted by Goya on large copper plates, the first edition, published in 1816 in very small numbers both as a set and as single prints, was the only one produced during the artist’s lifetime. The set, described by Sotheby’s as in virtually flawless condition, is believed to have been given to Anne-Adrien-Pierre Duc de Montmorency Laval, French ambassador to Madrid after the 1814 restoration of Louis XVIII, by Ferdinand VII in 1816 when he granted the ambassador a Spanish title, Duke of San Fernando Luis. These engravings were found untouched since the 1840s in the back of a ledger in the library of his chateau in northern France during an inventory by heirs to the estate. Séverine Nackers, head of prints for Sotheby’s Europe, calls a set with such provenance “a once-in-a-lifetime discovery”. Another complete first edition set sold for £168,500 at Christie’s London in 2007.

about 9 hours ago
A Degas bought by the Van Gogh Museum sparks off an ethical debate: are female nudes OK?