Object lessons: a falangcai bowl that could set a new record for Chinese porcelain 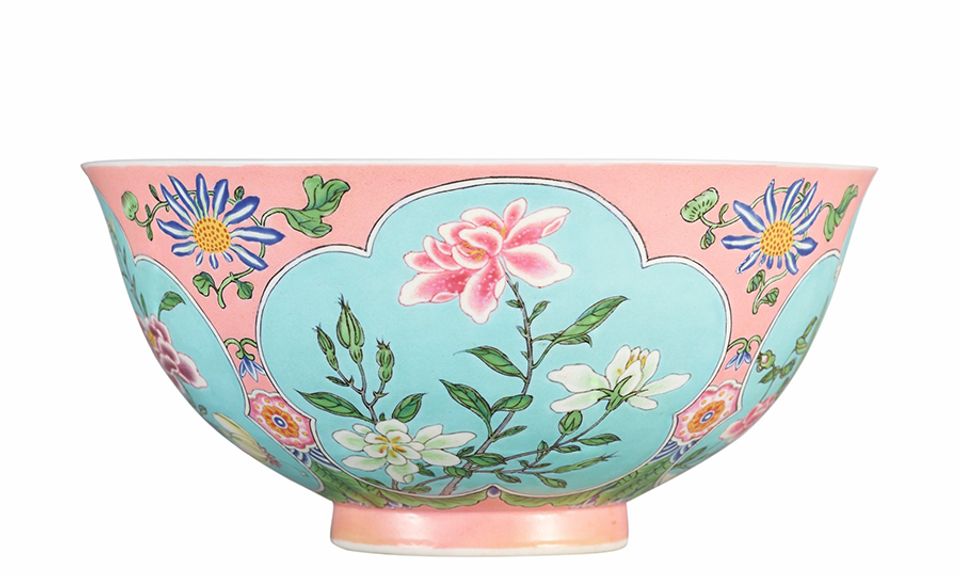 Gold-pink Falangcai Bowl made for the Kangxi Emperor, Qing Dynasty (1644-1912)

This small falangcai bowl, decorated with a turquoise quatrefoil and floral designs, could set a new auction record for Chinese ceramics when it is offered in a standalone sale. The piece measures just under six inches in diameter and is marked “Kangxi” and “Yuzhi” on the base, indicating that it was made for the emperor’s personal use, although its pristine condition suggests that it was a display-only piece. The falangcai porcelain type combines Western and Chinese techniques, comprising a ruby enamel derived from colloidal gold and a lead-based white enamel that allows for a range of pastel tones. Such ceramics had a short production period during the Qing Dynasty; specialists of the auction house believe this bowl is one of three related examples known to exist. One such bowl belongs to the collection of the National Palace Museum, Taipei, and is decorated with different flowers but made with the same material and markings. Both bowls are believed to have been thrown and fired twice in the imperials kilns of Jingdezhen, known as the porcelain capital of China with a tradition spanning nearly 2,000 years, and were likely painted by European Jesuits in the imperial palace workshops of the Forbidden City in Beijing. Although the piece is billed as hailing from the collection of Henry M. Knight, it was in fact acquired by the consignor, the Idemitsu Museum of Arts, Tokyo, from Knight’s collection when it was auctioned by Sotheby’s 32 years ago. Nicolas Chow, the chairman of Sotheby’s Asia and the auction house’s chairman of Chinese works of art, says the work “ranks without question among the finest imperially enamelled porcelains made for the personal use of the Kangxi emperor”. Last year, Sotheby’s Hong Kong set the record for Chinese ceramics with a Song Dynasty brush washer, which sold for HK$294.3m ($37.7m). 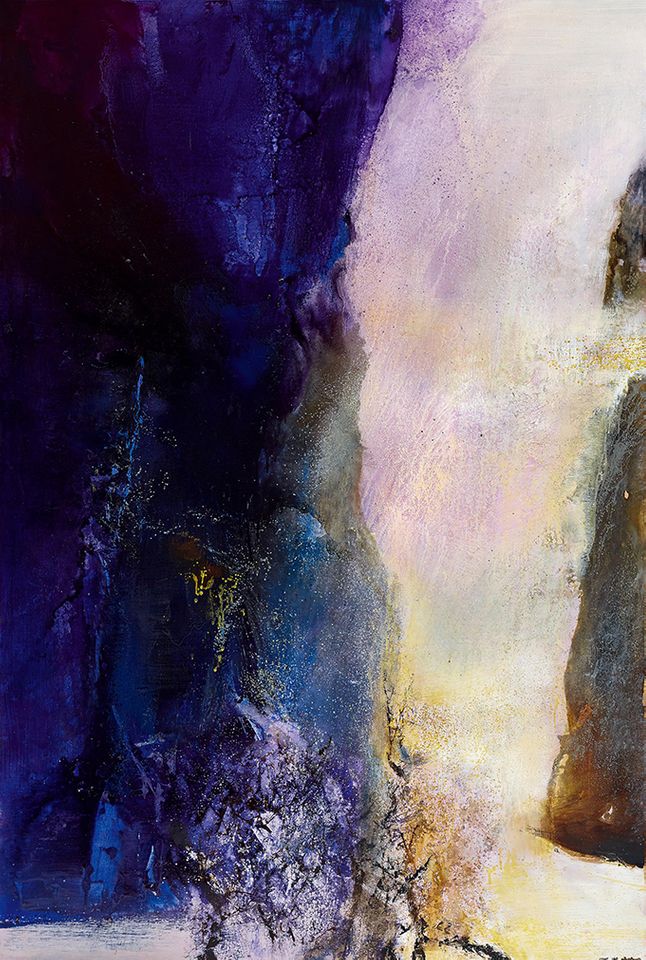 This oil painting is one of only three vertical “three-stream” paintings that Zao Wou-Ki created during his career. The late Chinese artist said he was inspired to create such compositions after seeing Henri Matisse’s oil painting French Window at Collioure (1914); in 1986, he wrote that Matisse’s work “presents a door [where] strength and emptiness [coexist]—stood in front of it, one finds life, dust and the air we breathe, [but] the question is what happens behind it?” Zao created the work at age 65, when “his international reputation was at its zenith”, says Vita Chen, the auction house’s general manager and senior specialist of Asian 20th-century and contemporary art. The large blue and purple area on the left of the painting is Zao’s interpretation of the “five gradations of ink colour” from traditional Chinese paintings, while the splashes of golden yellow in the middle evoke the warmth of sunshine and the white space creates dimly discernible scenes in the distance. The work will be included in the artist’s forthcoming catalogue raisonné, in preparation by Françoise Marquet and Yann Hendgen. Last year, Christie’s Hong Kong set the record for the artist with the early oil painting 29.01.64 (1964), which made HK$202.6m (around $26m). 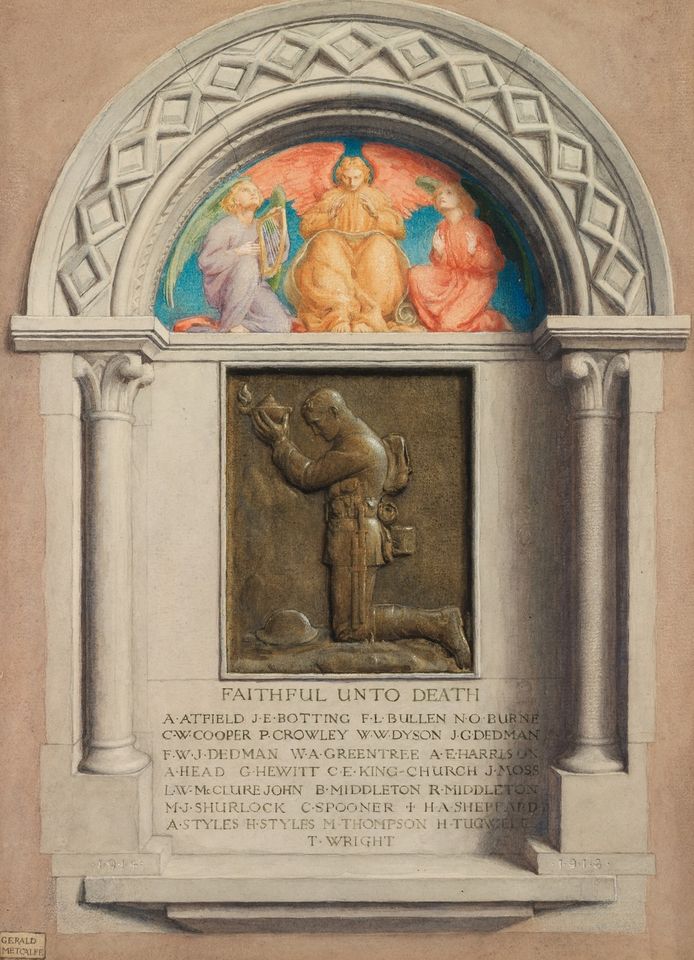 This watercolour on board was produced by the UK artist Gerald Fenwick Metcalfe as a design for a First World War memorial in the Albury Church of Surrey. The resulting monument, in stone and steel, shows a kneeling soldier in uniform surmounted by three angels and features 22 names with the inscription “faithful until death 1914-1918”. Metcalfe, a Royal Academy of Arts graduate known as a portrait painter, miniaturist, mural painter and modeller, resided in Albury and drew on local sources for this tribute, replicating the church’s the Romanesque exterior and casting a local postman as the central soldier. This work is one of around 20 watercolours of war memorials and cenotaphs being offered from the collection of Dr Alan Borg—who, before serving as director of the Victoria and Albert Museum between 1995 and 2001, was director of the Imperial War Museum of London. He developed an interest in military memorials after finding that they are “by far the commonest public monuments in this country but there [is] no central record of them and no account of their design and building”, he writes in the foreword of the auction’s catalogue. Borg spearheaded an ambitious project to archive the war memorials of the United Kingdom, the Isle of Man and the Channel Islands, which number nearly 70,000. The Imperial War Museum says it is “on the brink” of releasing a digitised database of around 23,000 images from the archive, which remains an ongoing volunteer project.