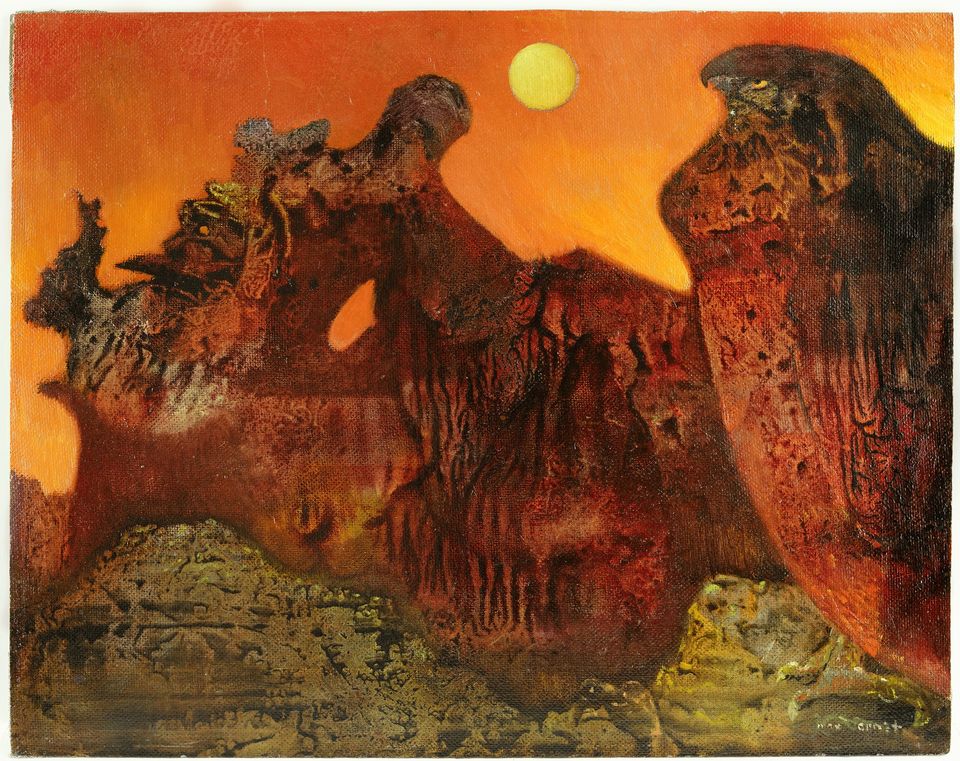 From this hallucinatory landscape in glowing orange hues, it is easy to see why the Surrealist artists Max Ernst and Dorothea Tanning settled in Sedona, Arizona, in 1946, having happened upon the then-remote slice of the southwest desert while driving from New York to California. The oil on masonite work shows an imagined view of a canyon in Sedona and is part of “a wonderful series of paintings from Ernst’s Sedona period that are like otherworldly mooonscapes, and recall his hyper-Surrealist paintings of the 1920s and 1930s”, says William O’Reilly, Bonhams’ head of Impressionist and Modern art for the Americas and Asia. Ernst was a fan of the German Romantic painter Caspar David Friedrich; in this and other Arizona works of the period, the emotional content of Friedrich’s landscapes is a clear influence. After 1957 Ernst primarily lived in France, and experts believe that this painting is one of the last works he created in Sedona. The painting is coming to the market for the first time from the family of a local surgeon, who was given the work by Ernst and showed it just once, in a 1961 exhibition at a gallery in Jerome. The painting will be included in an upcoming supplement to the Ernst catalogue raisonné by Werner Spies in collaboration with Sigrid Metken and Jürgen Pech. This work was created just three years before the German Dadaist and Constructivist died in exile in London. Measuring around 23 inches tall and 19 inches wide, it is one of the largest works Schwitters produced in the last period of his career. The work combines oil on panel with wood, plastic, glass, metal, fabric and newsprint assemblage, an example of the artist’s Merz (an abbreviation of “kommerz”) works, in which the artist elevated the status of commonplace objects and text clipped from magazines or newspapers, creating what he called “visual poems” with a rigorous discipline. In these works, the artist paradoxically insisted that the composition’s content (including, in this one, a snippet that reads “Orld’s Rarest and Moths”) refers “to nothing outside of” itself—and indeed cannot do so “without loosening its ties to art”. Schwitters is quoted as saying having said: “material matters as little as I do, [but] what matters is forming it”. 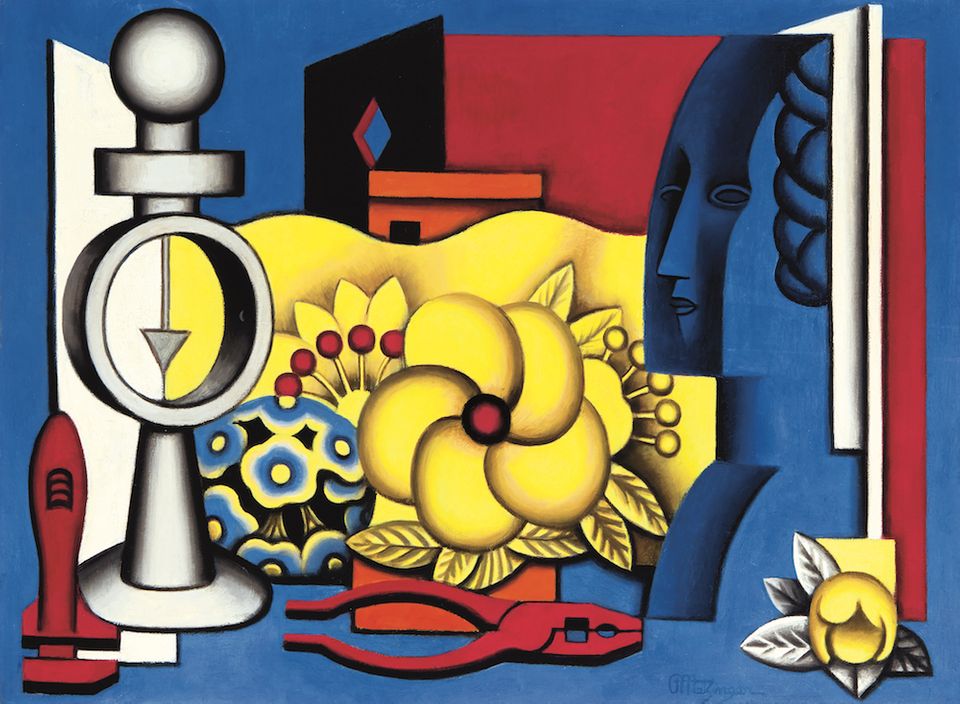 This existential still life, composed of industrial tools matched by flowers of a mechanistic nature and a bust of a woman staring coolly beyond the frame, alludes to the “machine” of society that fascinated many early 20th century artists. “Like his colleague Fernand Léger, Metzinger embraced an aesthetic based on machinery and industrial productions, both for their compelling forms and as metaphors for modern life”, says Elaine Banks Stainton, the director of the auction house’s paintings department. Although Metzinger’s works from the 1910s, when he was instrumental in the founding of Synthetic Cubist movement in Paris, are generally preferred by the market, this oil painting, Stainton says, is “a powerfully cohesive composition, and like Metzinger's best works, brilliantly coloured, as well as an unusually fine example of the artist’s ‘mechanical’ style, which he developed in the late 1920s.” The painting first belonged to Léonce Rosenberg, Metzinger’s dealer for many years and one of the earliest supporters of Cubism, whose Galerie L'Effort Moderne also represented Léger, Georges Braque, and Pablo Picasso, among others. The work, which retains its original gallery label, is being offered in good condition, with modest touches of restoration in peripheral areas of the canvas. Another still life from the same period featuring a similar blue bust, Composition à la tête bleue (1930), recently sold for €87,500 ($103,000) at Christie’s Paris.

about 10 hours ago
A Degas bought by the Van Gogh Museum sparks off an ethical debate: are female nudes OK?