Object lessons: a relic from the Forbes family collection, a portrait of contemporary migration and a neo-Russian painting Eight panels from the ‘Birth of Aphrodite’ mural (circa 1934) from the S.S. Normandie by Jean Dupas. Photo courtesy of Sotheby's.

Eight panels from the ‘Birth of Aphrodite’ mural (circa 1934) from the S.S. Normandie by Jean Dupas

This assemblage of eight glass panels was originally displayed in the Grand Salon of the S.S. Normandie ocean liner, an extravagant ship completed in 1935 that epitomised French Art Deco opulence. The panels, which feature gold, silver and palladium leaf, are among the 56 that originally comprised a mural of Greek mythological and maritime scenes. The artist, an eminent figure of the Deco era, created the work using the decorative verre églomisé technique, in which the backside of a glass surface is painted and gilded, producing a mirror finish. In 1942, after the ship was unable to return safely to its French port at the height of the Second World War, the US repurposed it as a troopship and removed its contents (the vessel later caught fire and capsised). Although a historical relic in its own right, the work has arguably garnered more attention for its illustrious provenance. In 1981, the American publisher Malcolm S. Forbes purchased the panels from Christie’s for $90,000 as a wedding gift for his son; between 1985 and 2014, they were displayed at the Forbes company galleries. After the sale, the New York Times quoted Forbes, a noted collector, as saying he “would have liked to win them for less” and that “I’m occasionally the victim of auction fever, but have said it time after time that I’ve regretted what I didn’t buy”. 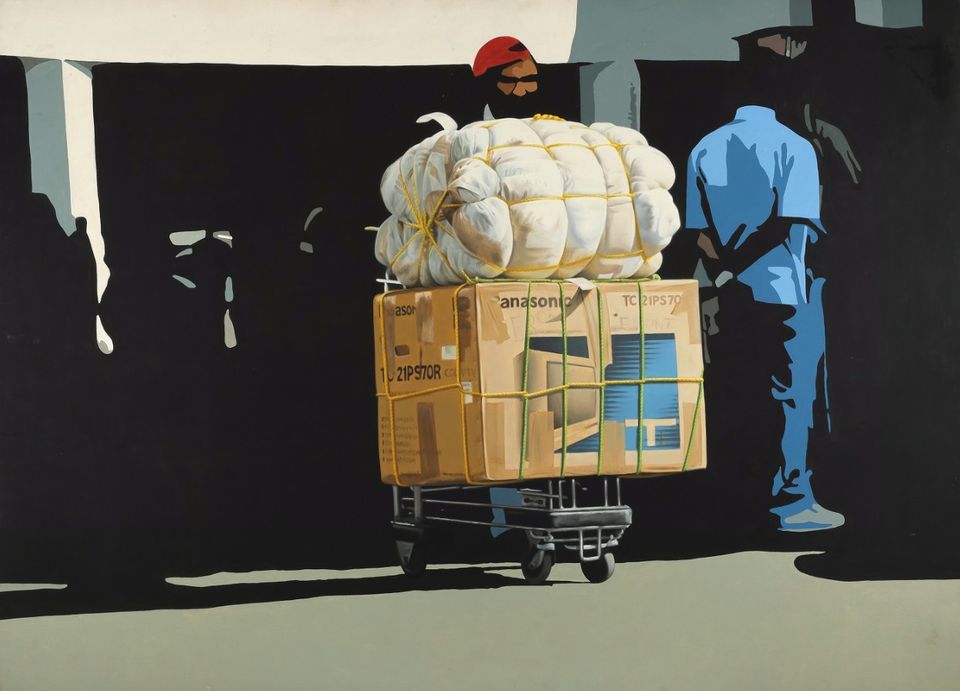 A highlight of the auction house’s annual online summer sale is a work from a series of paintings the contemporary Indian artist created around the theme of migration, where trollies wheeling baggage at the airport become symbols for workers returning home with Western luxury goods. The painting, whose title translates to Across the Seven Seas, alludes to the artist’s home province of Bihar, in eastern India, a largely rural and economically deprived area where a significant number of residents are forced to migrate to find work. When the house sold the work during a live auction in Mumbai last year, it achieved its high estimate of Rs 90,00,000. Another work on the same theme, created in 2005, was offered in 2014 at Sotheby’s London and achieved £117,000 with premium (est. £70,000-£90,000).

Bonhams is offering three rare works by Stelletsky, one of the most famous proponents of the neo-Russian style. This nationalistic, nostalgic genre emerged at the turn of the 20th century and takes its primary cues from Byzantine art, which is characterised by static, allegorical figures. The artist often illustrated subjects from medieval Russian history and exclusively used tempura paint, as did icon painters. This work, in tempera on board laid on canvas, depicts a traditional hunting scene. According to the catalogue, Stelletsky believed that “Russian people ought to have their art, [and] only by studying the artistic legacy of our ancestors, and even by imitating it, is it possible to resurrect the native Russian beauty”. The works being offered were first shown in 1912 at the Grafton Galleries in London’s Mayfair (which was operated by the eminent French dealer Paul Durand-Ruel), where a reviewer for The Times called them ‘spirited and amusing’, and have been likely consigned to the auction house by a Scottish collector.