Object Lessons: a Western classic offered with its featured subject, a Roman-inspired glass dish by Carlo Scarpa and a netsuke from a vanguard collector 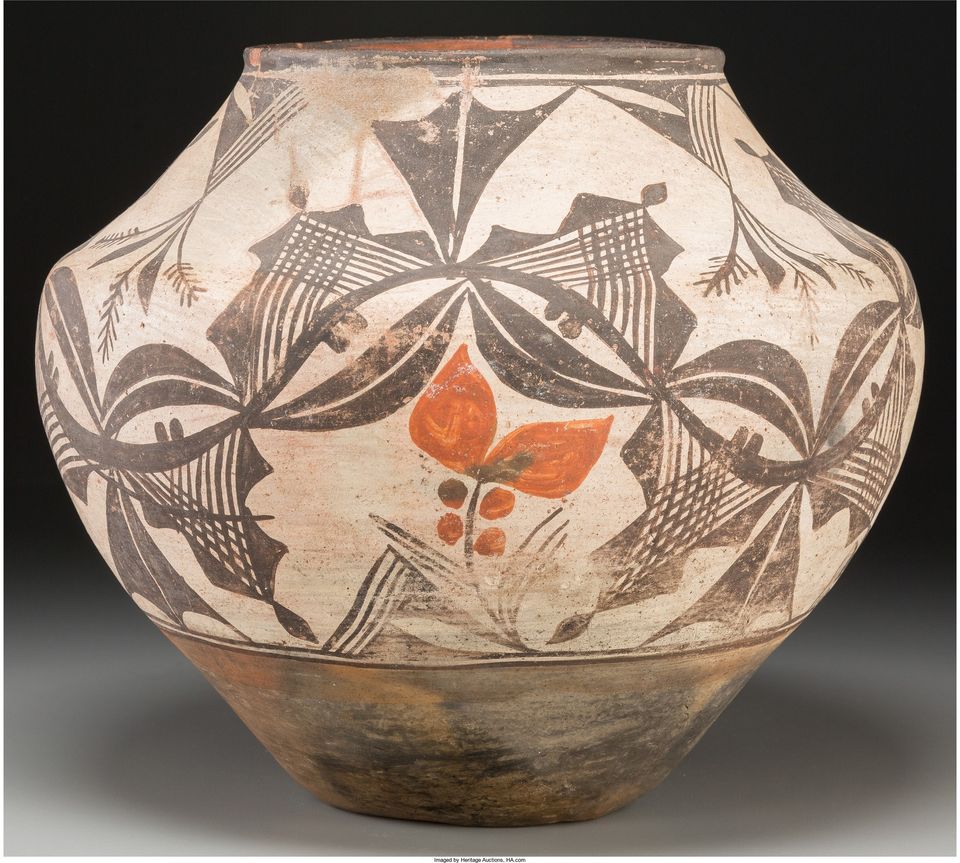 A jar from the Zia Pueblo (date unknown).

The Pottery Connoisseur (around 1930) by Eanger Irving Couse, with jar from the Zia Pueblo

Couse trained at the Académie Julien but ultimately left Paris behind for New Mexico, where he became the founding president of the Taos Society of Artists and a noted painter of Native American subjects. As an added bonus to this prime example the auction house will offer one of the original jars depicted in this work, which comes from the artist’s expansive personal collection native crafts. Although the scene appears to be documentary, Couse often sacrificed fidelity for artistry, in this instance costuming his model with a breechcloth, headdress, leggings and moccasins, and staging the room with jars from the nearby Zia Pueblo, renowned for its pottery. The jar that the model is holding recurs in the artist’s work and was salvaged from his home by the collectors Veda and Ward Vickery, who were known for their “impeccable taste” and purchased both works from the artist’s son in 1964. “I’ve never seen a sale of this kind before”, says Aviva Lehmann, the house’s director of American Art. “This is what collectors of Western art want: a work that is in pristine condition and in its original frame, with an impeccable provenance and prop to match”.

Update: the lot sold privately after the auction closed. 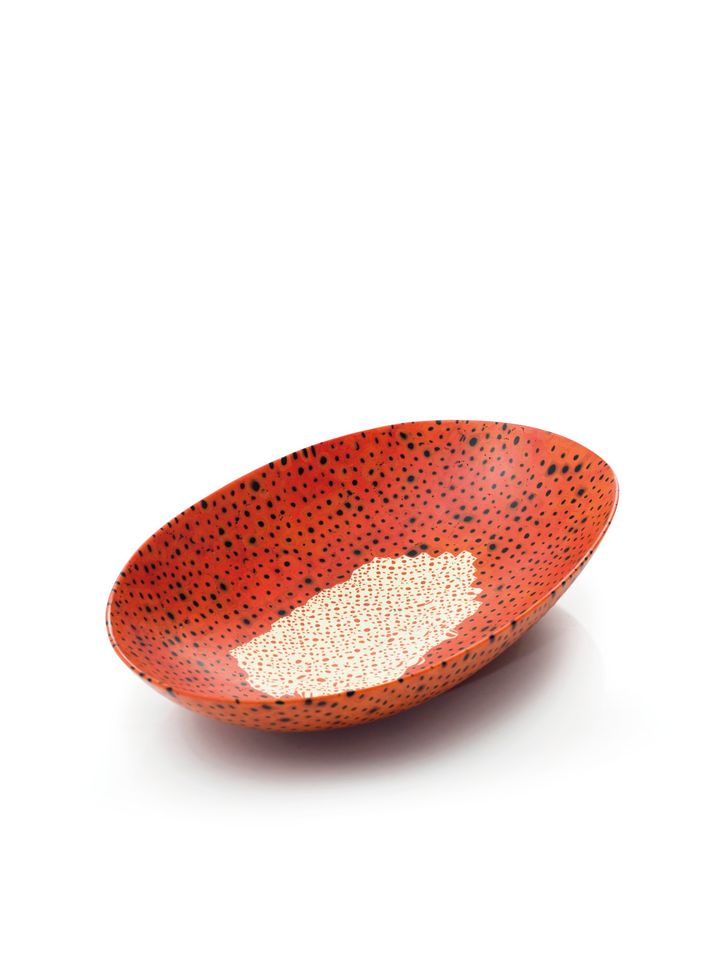 The first single-owner auction of works by the Italian architect and designer comprises around 90 lots of glass art that the artist produced for the famed Venini glassworks in Venice between 1926 and 1962, a period where he worked with two glassmakers to push the medium forward with new treatments that drew on ancient Chinese, Roman, and Byzantine techniques. This particular dish is a fine example of his ‘murrine opache’ technique—considered to be his greatest technical and stylistic achievements—which involves fractaled geometric shapes that appear to create an optical illusion. Similar examples are found in the Glasmuseum Hentrich in Düsseldorf, the Ca’ Pasaro museum in Venice and other important collections. The work is being sold in its original box and was given to the original owner as a wedding gift (and perhaps was never used). Interest in Scarpa’s glass works—and Italian glass in general—has spiked in recent years, with the French auction house Piasa hosting a dedicated sale of his work in 2014 and the Metropolitan Museum of Art (Met) organising an exhibition of nearly 300 of his glass works created between 1932 and 1947, when he was the artistic consultant for Venini. 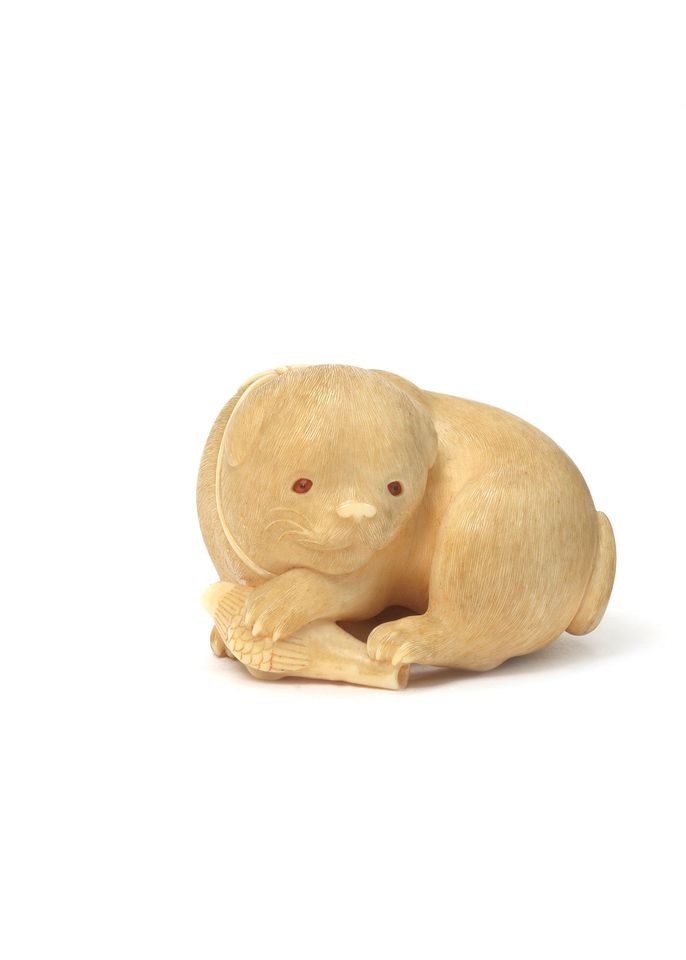 10 May: The Julius and Arlette Katchen Collection of Fine Netsuke: Part II A Japanese ivory netsuke of a puppy (mid/late 19th century) by Kaigyokusai Masatsugu

The highlight of the second sale of Japanese netsuke from the collection of the English collectors Julius and Arlette Katchen is an ivory netsuke of a puppy with inlaid amber eyes by Kaigyokusai Masatsugu. Starting in the 17th century, these miniature sculptures were used by Japanese men to suspend pouches containing their belongings from a cord attached to the sashes of their kimonos (which traditionally have no pockets), essentially a toggle with an aesthetic purpose. Other netsuke by the Osaka-born artist—who was self-taught, and carved both wood and ivory—are found in the collections of the Victoria and Albert Museum and the British Museum in London and the Los Angeles County Museum of Art. Julius Katchen bought the tiny hound from an English country sale for £945 in 1964—at the time, the highest price on record for a netsuke sold at auction. Fifty-two years later, in November 2016 Bonhams sold a slightly more intricate ivory carving of a dog and a puppy by Gechu, another famous netsuke artist, for £221,000, now the second-highest price paid at auction. Other highlights of the upcoming sale, which comprises 200 lots, include netsukes of a stag (est. £50,000–£70,000) and a wild boar (est. £8,000-£10,000).