Object lessons: an anti-authoritarian triptych by Mike Kelley, a Western sculpture by Frederic Remington and an early work by Rosemarie Trockel 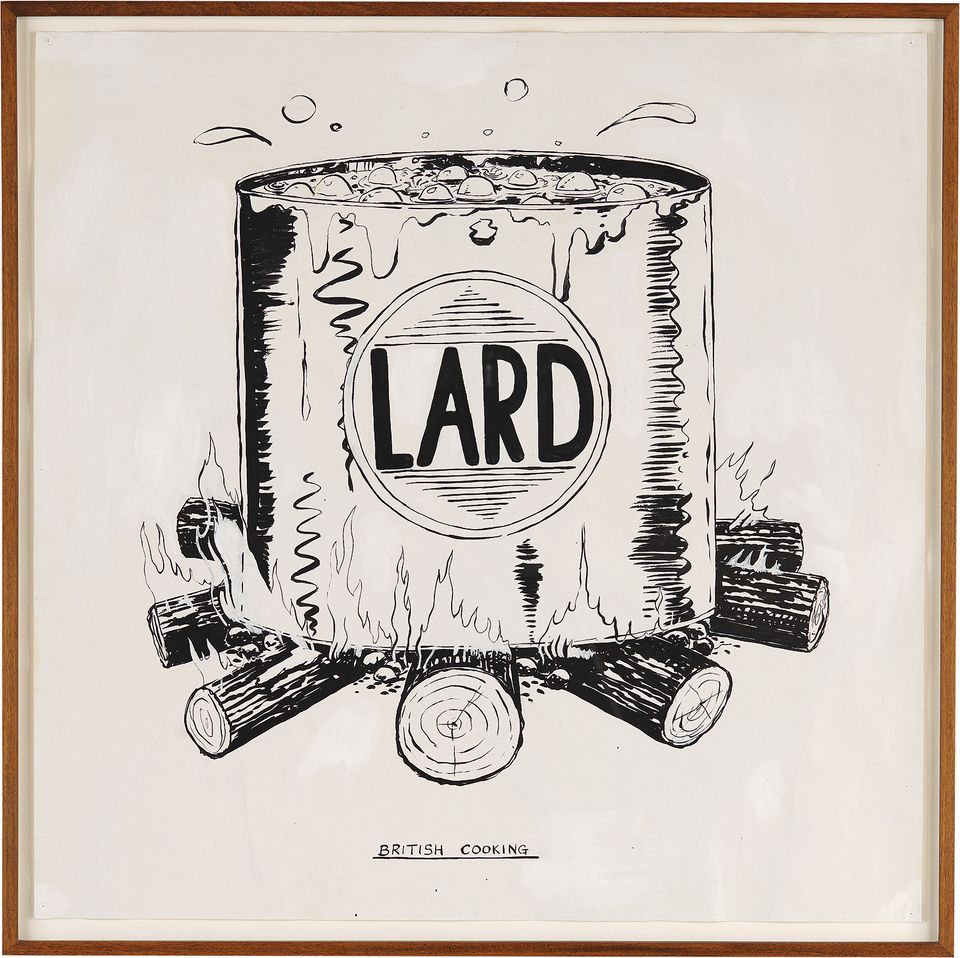 21 May: Modern Art and Design

The triptych, created while the late US artist was travelling in Australia, was originally shown as part of Australiana, an installation of 40 works included in the Newport Harbor Biennial in 1984. The anti-authoritarian but comic work is composed of black-and-white paintings on paper that depict a tin of lard atop a wooded fire, a pig with a missing front leg and a Los Angeles police department badge. The work is being offered at auction for the first time from the collection of the Rosamund Felsen Gallery of Los Angeles, one of the first dealers to promote Kelley’s work. “In a relatively simple composition, we gain an understanding of the artist’s vocabulary, which is often embedded in abjection; the immediate visual impact, however obvious, is not the only message for the artist”, says Peter Loughrey, the director of Modern design and fine art the auction house. “After over 30 years, this work remains one of Kelley’s most powerful and lasting works, and continues to serve as a mirror and prism for the social, cultural and political issues of our lives”. 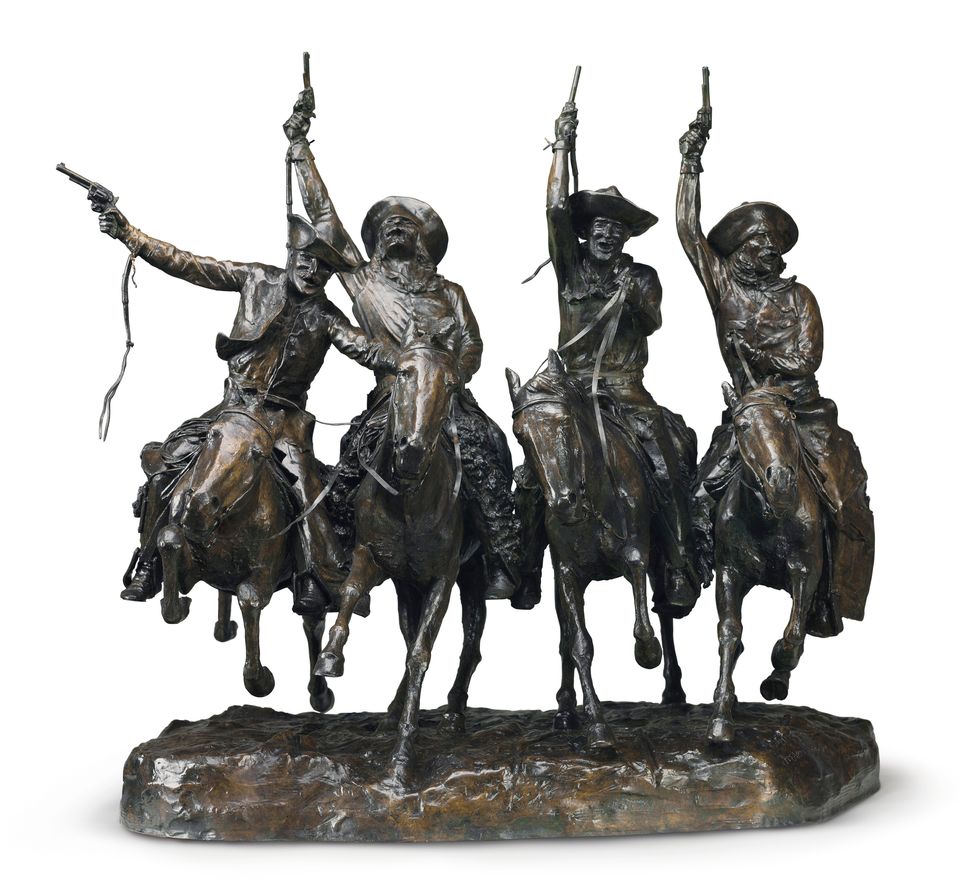 Coming Through the Rye (1902, cast by 1906) by Frederic Remington. Photo courtesy of Christie’s.

Considered a masterpiece of its field, the bronze with brown patina work was born from a collaboration between the artist and Riccardo Bertelli, the founder of the New York-based foundry Roman Bronze Works (which now operates as Roman Bronze Studios). Although the foundry produced some of Remington’s most complicated sculptures, this particular design proved more arduous to complete than others. In 1908, the artist, frustrated by unsuccessful casts, partially destroyed his model with a metal bar, leaving just two unnumbered prototypes and eight complete casts that were created from the original design. The work is first recorded in the foundry’s ledger books in 1903 as ‘Rye Group #3’ with an annotation of $600, then in 1906 with a second payment of $600, which experts believe likely represents a down payment by Tiffany & Co. in New York, the first owner of the work. The sculpture—a “dramatic portrayal of the American cowboy that informs our national perception of this persona and, more broadly, the American West”, says Will Haydock, the head of American Art at the auction house—is one of the last casts of this design to remain in private hands, while others belong to institutions such as the National Gallery of Art in Washington, DC and The Art Institute of Chicago, among others. 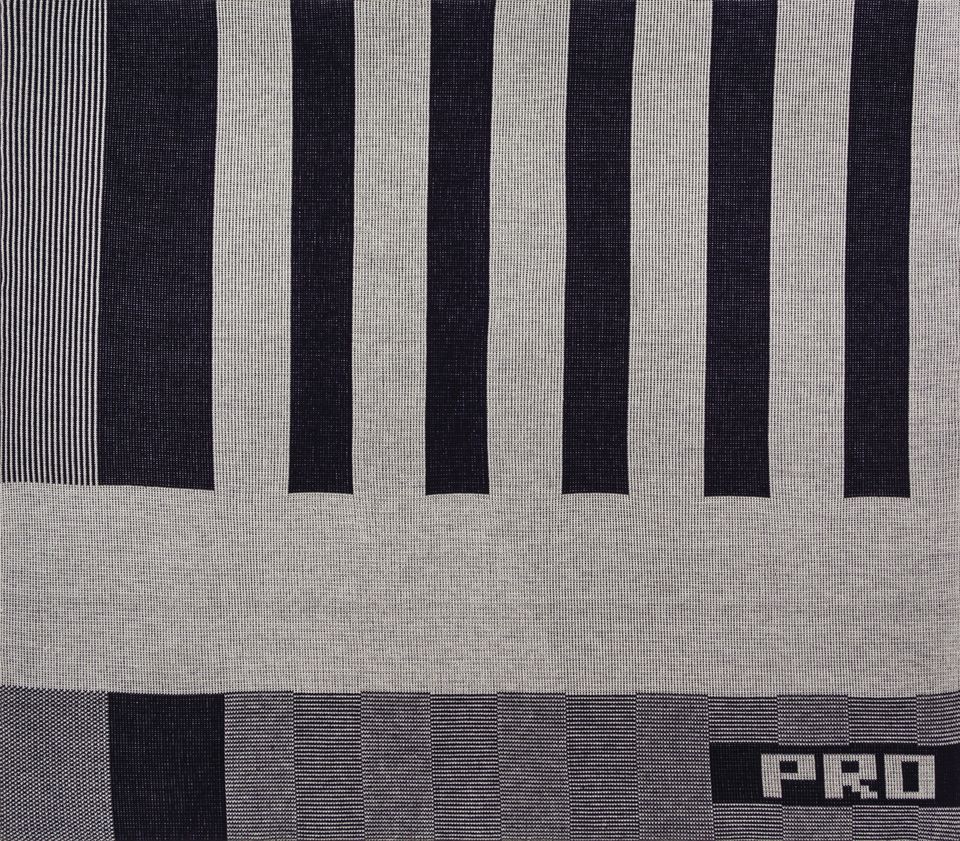 23 May: Post-war and Contemporary Art

The work, composed of knitted wool on canvas, a material that the artist has incorporated in her work since the 1980s, depicts a binary bitmap order in blue and white grayscale, representing the more starkly minimal side of the artist’s practice, which is “not as overtly political as other examples that feature symbols of communism, capitalism or charged commercial logos”, says Zachary Wirsum, a specialist in the post-war and contemporary art department at the house. The third edition of 57, the work was first acquired by the Monika Sprüth Galerie in Cologne in 1986, which predominantly aimed to promote female artists and feminist works of art. “Coming of age artistically in the male-dominated German art scene, Trockel distinguished herself from luminary figures like Beuys, Kiefer, Polke and Richter by aligning herself with Sprüth”, says Wirsum. “In this work, Trockel utilised the traditionally feminine and domestic method of working with wool, often associated with handcraft and mending, by removing the hand in the creation and producing machine-manufactured knit ‘paintings’ from computer-generated images”, adds Wirsum.