Object lessons: from a monumental Art Deco sculpture to a German Symbolist painting

These monumental Art Deco sculptures, representing the French colonies, were designed by Georges Saupique for the entrance of the Parisian headquarters of the Compagnie Financière Française et Coloniale. The two-year project, which fused Orientalist and Art Deco sensibilities, helped build Saupique’s reputation as an artist. Saupique recalled the intense process of creating these works: “It was a year filled with frantic work.” He used four types of marble for these sculptures, including a dark red French marble from Sampans for the skin and a cream and veined Italian marble for the draped material. When the Compagnie Financière Française et Coloniale building was sold, in 2000, the sculptures were sold by Artcurial to Claude and Simone Dray. In 2006, they were acquired by US collectors, who have now consigned them to sale. 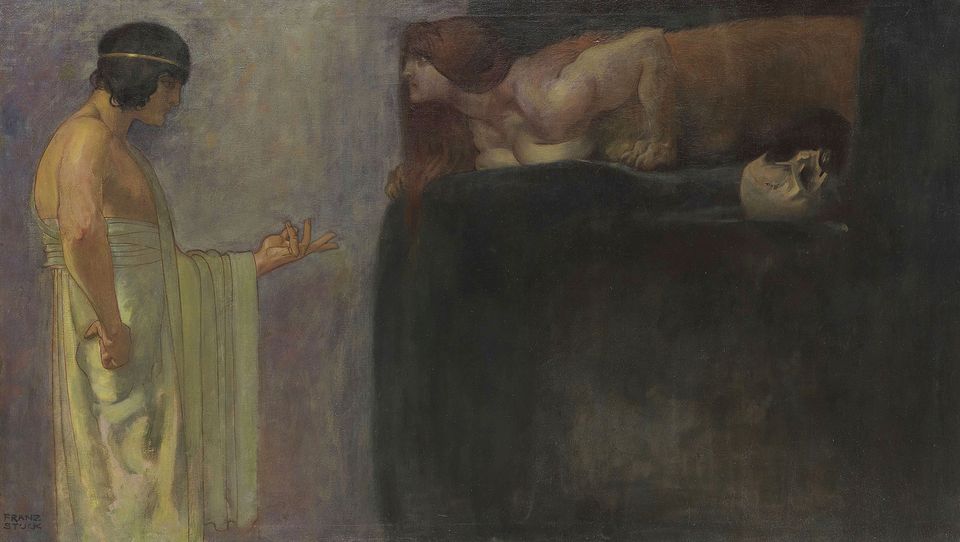 The German symbolist painter Franz von Stuck (1863-1928) was enthralled by Greek and Roman mythology. His near obsession with antiquity is seen in both his paintings and in the Art Nouveau-meets-Classical interior of his lavish Munich home, Villa Stuck. Of particular fascination was the sphinx, the subject of five works including Oedipus Solves the Riddle of the Sphinx (1891). Shown lunging forward, wide-eyed, at Oedipus before plunging into the abyss, the sphinx typifies Stuck’s view of these creatures as symbols for enigmatic and destructive women.