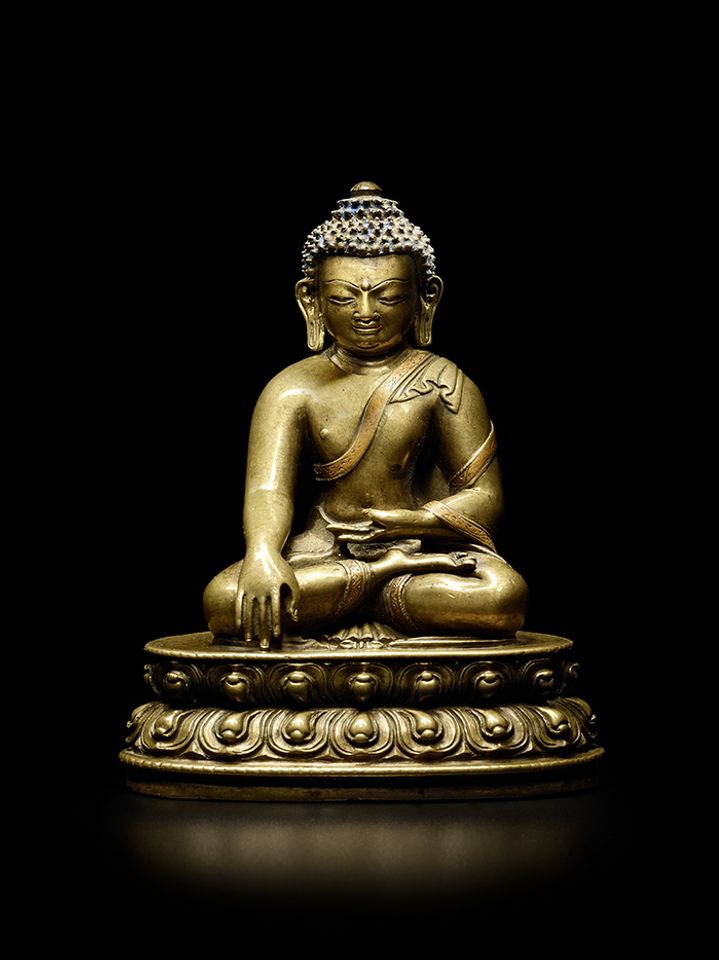 This Tibetan figure of Buddha, cast in brass alloy with copper inlay, shows the sage seated in yogic meditation and draped in a pleated robe atop a base of lotus petals, a style common in central and southern Tibet in the 13th and 14th centuries. The work shows all the auspicious marks of “Buddhahood”—extended earlobes, forehead mark and skull protuberance—and also retains some of the lapis lazuli used for the Buddha’s hair and some gold in recessed areas. The sculpture is around 4 in tall, suggesting that it was created for private devotional use and perhaps stored in a portable shrine called a gau. The sculpture's smooth, mirror-like patina is further evidence that “it’s been handled and touched in centuries of ritual ablutions, something that differentiates Tibetan sculptures of Buddha from other sculptures—which were often not meant to be touched”, says Edward Wilkinson, the auction house’s global head of Indian, Himalayan and Southeast Asian art. The baseplate is inscribed with a “double dorje” or “visvavajra”, a emblem of protection in Tibetan Buddhism, which is encircled by the “ashtamangala”, a set of eight auspicious symbols of that include a parasol, fish, vase, lotus, conch, endless knot, banner of victory and wheel. The auction house has sold similar examples from the same period, made in different mediums, for six-figure sums. 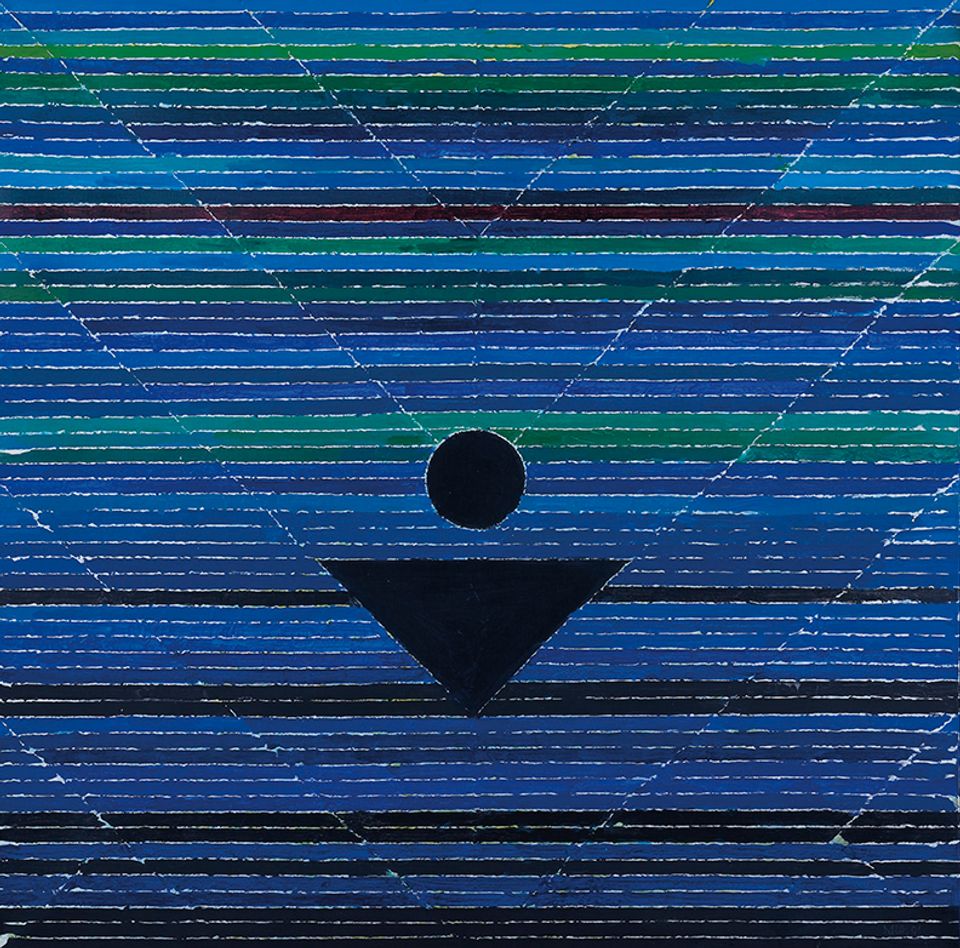 While the sale's smouldering cover lot Tapovan (1972) shows Raza at the height of his Expressionistic powers, this later work displays a highly controlled sense of calm. This hard-edge acrylic painting features a “bindu”, a recurring motif of the Indian Modernist’s work that derives from the Tantric metaphysical symbol representing the “void or seed where genesis takes place”, says Nishad Avari, the house’s head of sale and specialist in South Asian Modern and contemporary art. “Natural elements such as water and sky are channelled through the artist’s palette of blue and green, while the inverted triangle beneath the bindu symbolise the prakriti, the female polarity of the cosmos”. Raza (1922-2016), born in Madhya Pradesh, was a founding member of the Progressive Artists’ Group in the late 1940s, a movement influenced by European styles like Cubism, Geometric Abstraction and Abstract Expressionism. After accepting a scholarship at the École des Beaux-Arts of Paris in 1950, Raza settled in France but grew disillusioned with what he called “plastic art”. In the late 1970s, the artist intermittently returned to India and, influenced by the syncretic spirituality of Indian works of art, abandoned the Expressionist style that had dominated his work and initiated the Abstract Geometric “bindu period”. This painting “pushes the geometric, non-representational idiom Raza developed to its limits”, says Avari. 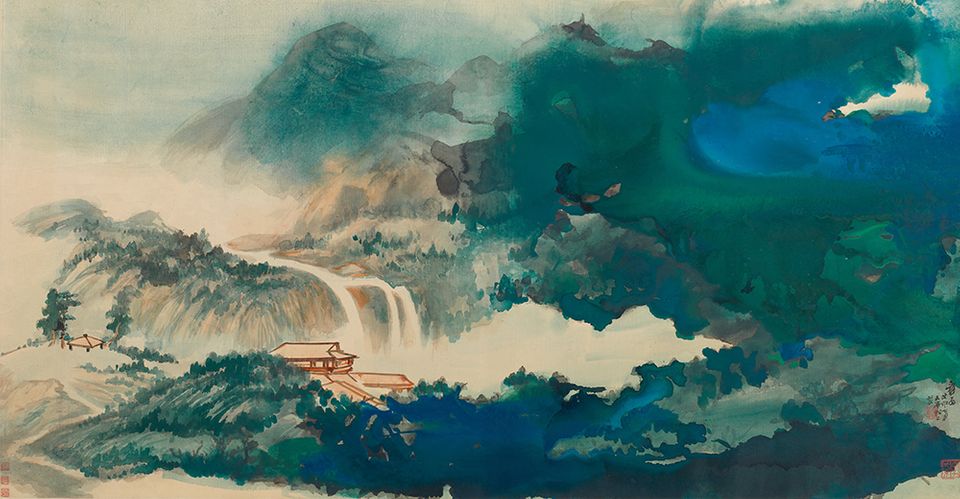 The late Chinese artist Zhang Daqian (1899-1986) created this misty scroll painting in his famous “splashed ink” technique, the artist’s most sought-after style, involving an abstract simplification of forms. The panoramic landscape, 6.3ft in length, shows the sun rising after a storm in mountainous blue-green landscape that is still partly shrouded by fog, and is notable for the depth and richness of the azurite and malachite pigments. The work "does not depict any particular location, but it is possibly inspired by a poem by the Chinese poet Su Shi", says Xian Fang, the auction house's head of sale of classical Chinese paintings in New York. Originally a traditionalist painter, Daqian developed a more Expressionist style after permanently leaving China in 1949. This work was produced around the time the artist relocated from Brazil to Carmel, California, where he met Thomas, Frances and Joan Chew, a family of Chinese antiquities dealers who became lifelong friends and patrons of the artist. The work, being offered at auction for the first time, has never left the Chew family’s collection, and has not been shown or published. Similar splashed ink landscapes by Daqian are held in major collections like that of the Metropolitan Museum of Art, New York. In 2016, the auction house’s Hong Kong outpost set the artist’s record with a vertical splashed ink hanging scroll called Peach Blossom Spring (1982) that made HK$270,680,000 (est HK$50m-HK$65m).