Object Lessons: studies in space and time, from an Andalusian astrolabe to a Sioux pictorial calendar

26 April: Arts of the Islamic World

Sotheby’s will offer the earliest astrolabe from Muslim Spain known to exist, engraved by the Andalusian astrolabist Muhammad Ibn al-Saffar of Cordova. In their most basic form, astrolabes—an inclinometer formerly used for astronomical measurements and marine navigation—consist of a disc with marked degrees and a rotating pointer. This more complex relic comprises over ten components, including six flat plates that each represent a celestial sphere—with the cities Toledo, Cordoba, Damascus, Mecca and Medina named in correspondence to their latitude—as well as lines that represent the horizon, altitudes and the hours. The rete of the object, the piece that fastens everything together, has the shape of a star map and was likely added in the 16th or 17th century in the Eastern Mediterranean, possibly Ottoman Turkey, suggesting that the object was well traveled. Other astrolabes by al-Saffar are held by the Royal Scottish Museums in Edinburgh and the Deutsche Staatsbibliothek in Berlin. Having survived nearly intact for over a thousand years, the object is “an important scientific discovery that stands out for its supreme rarity and reflects the vibrant scientific history of the region”, says Benedict Carter, the house’s head of auction sales of the Middle East department 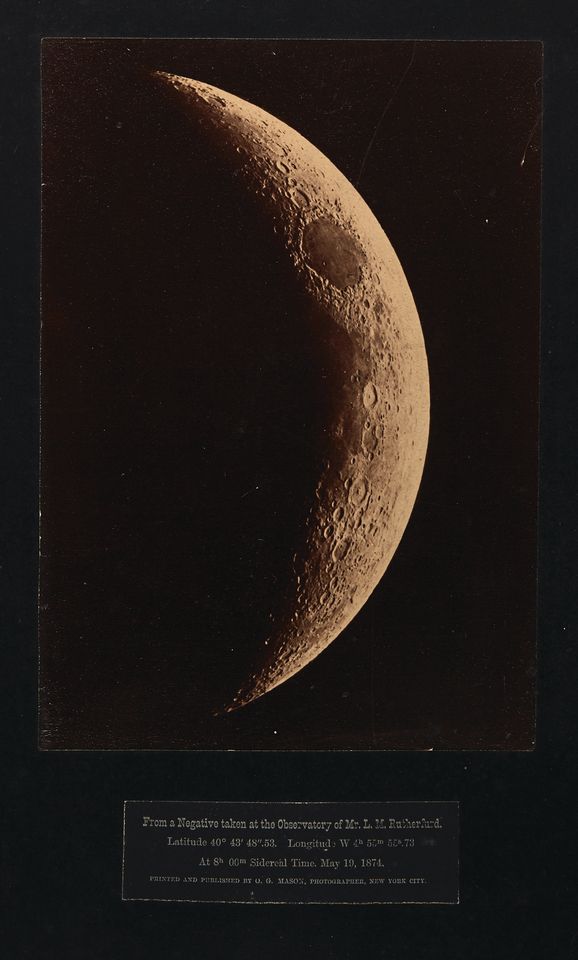 The Moon from a Negative taken at the Observatory of Mr. L. M. Rutherfurd, May 19, 1874. Photo courtesy of Doyle.

An early print of the moon captured by the American celestial photographer Lewis Morris Rutherfurd is among the highlights offered in this sale of paper ephemera. A former lawyer who ditched the practice in 1849 to focus on astronomical photography and spectroscopy, Rutherfurd is credited with inventing the first astrophotographic camera, which utilised an 11 ¼ inch telescope as a lens. The photograph was shot in the observatory that Rutherfurd built in 1856 in his New York home at 11th Street and 2nd Avenue. It features a sidereal of the time, as well as the latitude and longitude. A similar albumen print of the moon—this one however dated and signed by Rutherfurd, with a personalised inscription to Sir George Biddell Airy, the British astronomer who established Greenwich as the location of the prime meridian—sold at Bonhams auction house in New York for $23,000 with premium in 2012.

Update: the work passed at auction. 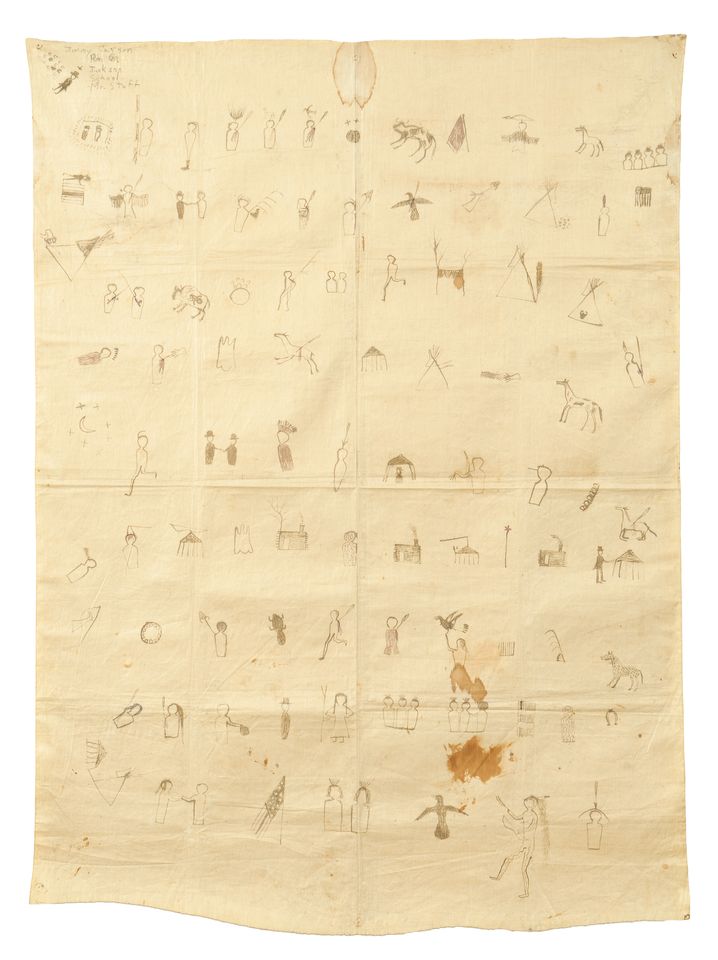 5 May: American Indian and Ethnographic Arts

As part of its annual auction of indigenous arts and crafts, the auction house is offering a muslin winter count from the Dakota Sioux tribe, put up by the heirs of US General Henry Martyn Lazelle, who fought against the Sioux in South Dakota in 1877, during the American-Indian Wars. Winter counts are pictorial calendars made by the Sioux to track years, offering a more authentic history of the lives of native tribes than accounts recorded by foreign colonisers. Pictograms serve to mark “the most memorable event that happened for that particular tribe”, says Douglas Deihl, a specialist of the department. Originally painted on buffalo hides, before the animals became scarce and the tribes were confined to reservations, winter counts’ designs can vary, employing lines, or spirals. They were often duplicated in different mediums, as was this example covering the years 1786-87 to 1876-77 and depicting the deaths of warriors among the key events. The most recurring entry in winter counts across various tribes is the Leonid meteor shower of 1833—known as the ‘The Year the Stars Fell’—when thousands of shooting stars were visible in the North American continent for three nights. Although this particular winter count is “not in colour and somewhat basic, with the drawings a bit on the crude side, it’s exceptional quality-wise, as it was collected in the 1870s—considered fairly early for this type of object”, says Diehl.