Object lessons: a Dutch landscape recovered by the Monuments Men and drawings by Tiepolo and Louis Soutter 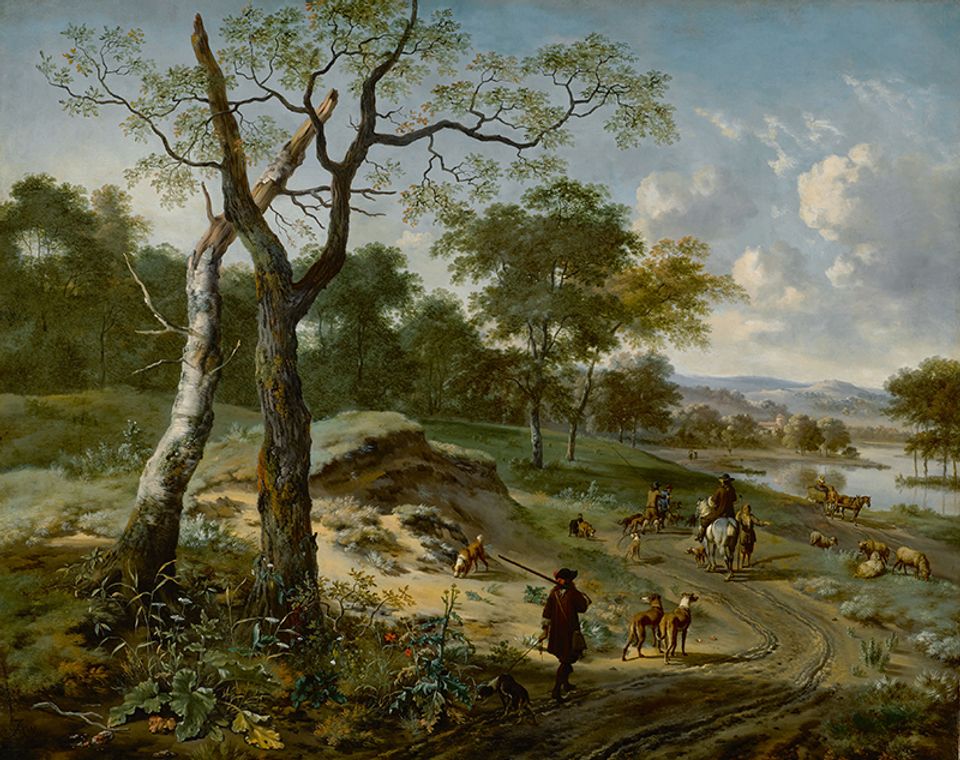 Wooded Evening Landscape With A Hunter And His Dogs, Another Hunter On Horseback Conversing With A Peasant, A Fishermen And A Falconer Carrying A Hoop Of Falcons On A Path, A Wagon And Other Figures By A Lake Beyond by Jan Wijnants and Adriaen van de Velde Christie's Images Ltd

This bucolic oil painting by the Dutch landscape artists Jan Wijnants and Adriaen van de Velde was recovered by the Allied Forces’ Monuments Men from Nazi storage facilities in the salt mines of Alt Aussee, Austria, at the conclusion of the Second World War. The work, looted from Baron Alphonse von Rothschild’s Vienna mansion in 1934, was repatriated to Baroness Clarice de Rothschild in 1947, who donated the painting to the Kunsthistorisches Museum the following year. Lucian Simmons, the auction house’s head of restitution, describes how elements on the verso “bear witness to the remarkable journey this painting took”: the inventory number from when it hung in Rothschild’s mansion; a rough crayon scrawl of “K991”, which Nazi officials applied when the work was in storage, awaiting placement in Hitler’s unrealised Führermuseum; and the Kunsthistorisches’ markings. “Such labels are an invaluable resource for researchers to use in reconstructing what happened to works of art in the greatest cultural plunder in European history”, says Simmons. In 1999, the museum returned the work at the request of the Rothschild family, who sold it to the present owner at Christie’s London for around $3m. 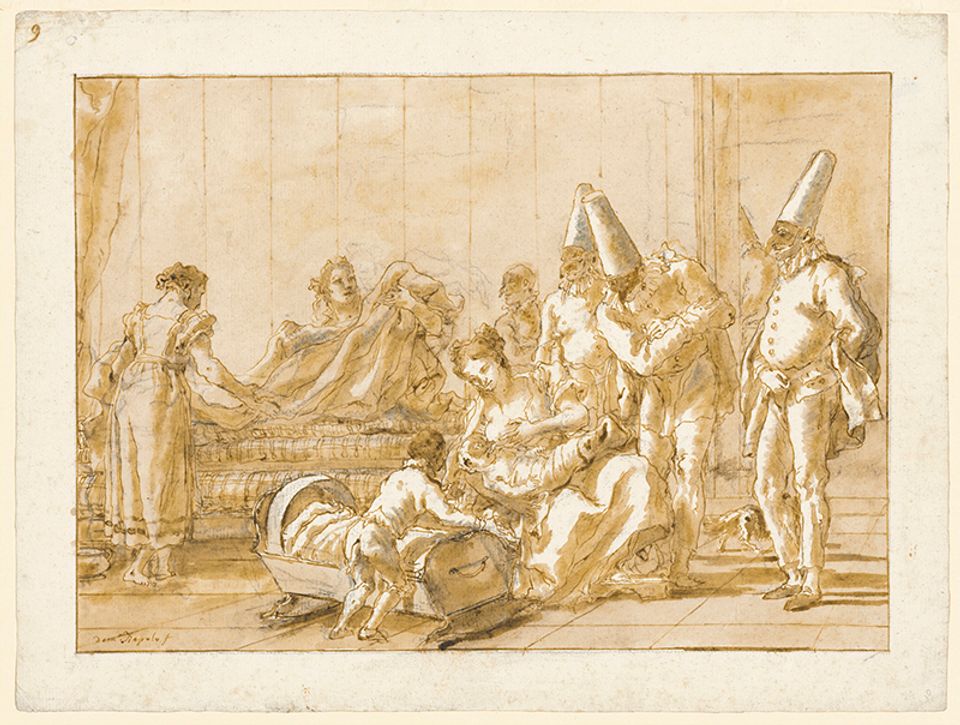 The nursing of Punchinello (around 1790s) by Giovanni Domenico Tiepolo Sotheby's

The nursing of Punchinello (around 1790s) by Giovanni Domenico Tiepolo

This drawing, done in black chalk, pen and brown ink, with touches of reddish-brown wash, displays Tiepolo’s comic flair. It belongs to a series he made of Punchinello, a central character of the commedia dell’arte, portraying the fiendish protagonist (a forerunner of Mr. Punch) in various stages of his life. The series, which originally comprised 104 drawings, was titled “An Amusement for Young People”; the drawings are now largely dispersed among major museum collections. While few scenes are easily decipherable to modern viewers, this one, numbered nine at the upper left margin, shows the infant Punchinello being nursed while masked jester-like figures stand in the background. The work was last shown in 1996 at the Indiana University Art Museum, Bloomington, and sold to the present owner the same year in a Christie’s London sale for £133,500m (est £80,000-£120,000). The highest auction price for a work from this series was set at Sotheby’s New York in 2012 with a more complex composition that achieved $722,500 (est $300,000-$400,000). 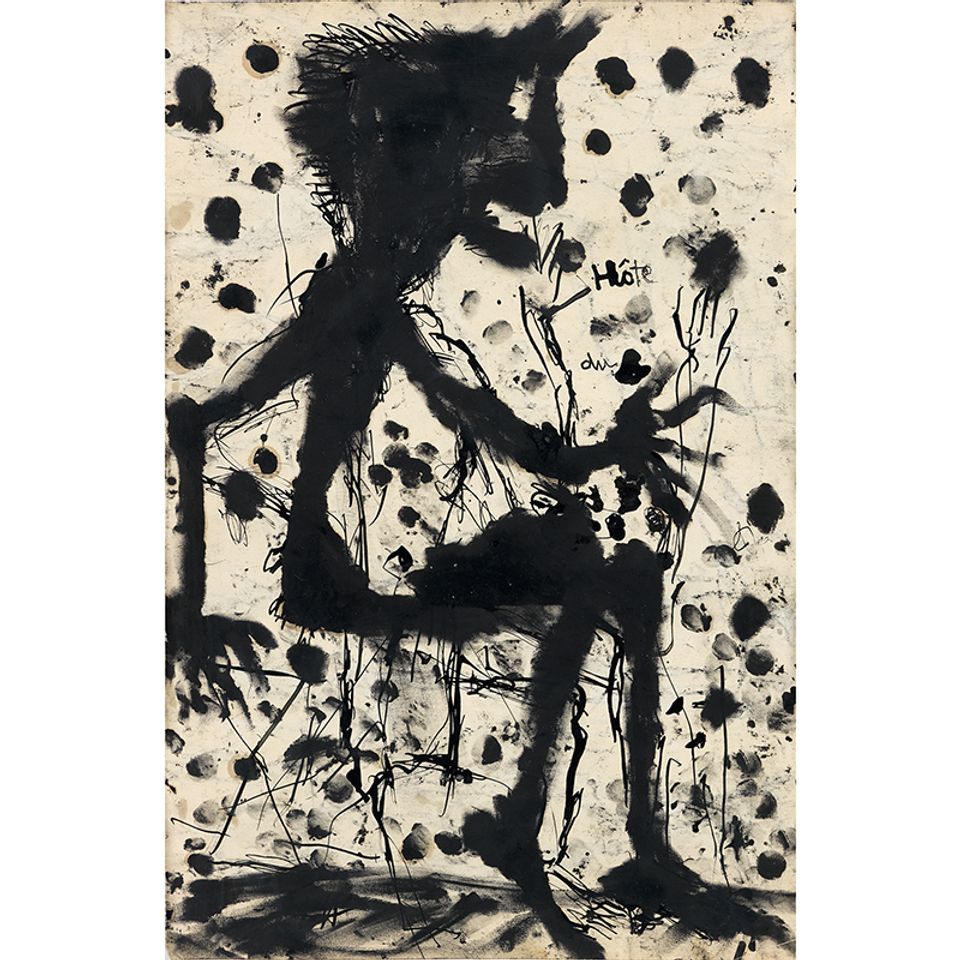 This ominous ink on paper from the noted collection of Helmut Zambo illustrates the idea of demonic possession. The Swiss-born Soutter, a cousin of Le Corbusier, was formally educated in art, studying engineering and music before transitioning into architecture. After a stint in the US in the late 1890s with his wife, an American violinist, the artist returned to Switzerland alone in 1903, where his physical and mental health steadily deteriorated. In 1923 he was admitted to a care home in Ballaigues, where he spent the last two decades of his life, producing drawings—including this work—at a prolific pace. Le Corbusier, intrigued by his cousin’s art, stepped in to assist financially and published a review of Soutter’s work in Le Minotaure in 1936, praising his relative’s “Mannerist” style; he also organised an exhibition at the Wadsworth Atheneum in Hartford, Connecticut, that same year. Although interest in Soutter’s work waned toward the end of his life, the phantasmagoric drawings of this period continue to compel collectors; in 2012, Soutter was the subject of an exhibition at the Fondation Antoine de Galbert in Paris; in 2016 Christie’s Paris set a record price of €265,500 for a work by the artist.